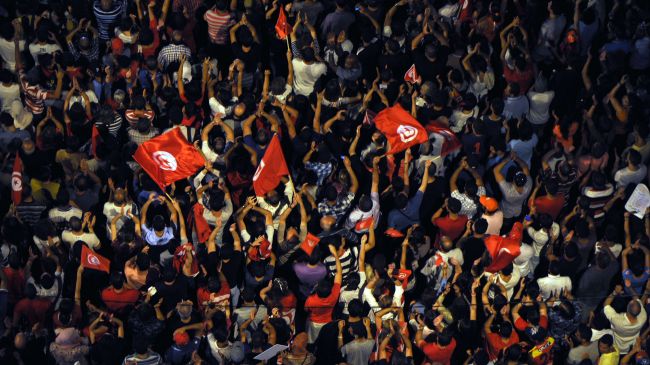 Alwaght- Victory of ‘Call of Tunisia Party’ (Nidaa Tounes), in other words the victory of forces of secular front including the nationalists, leftists and the technocrats of Ben Ali period which was concurrent with the victory of Caid Essebsi in the presidential election of the last year, paved the way for the Call of Tunisia to be placed first among other parties. Before that, the party won 85 seats in parliamentary election in 2014 (39.17%), while the Ennahda Movement won 69 seats (31.79%) and was placed the second and then with a remarkable difference the Free Patriotic Union with 16 seats and then Popular Front Party with 15 seats were next in the ranking.

All these developments have had their own particular effects on balance of power in Tunisia and the parliamentary election; their effects were also reiterated in the presidential election. One of the wonders of the Tunisian parliamentary election was the fact that the party of Moncef Marzouki, the incumbent President of Tunisia and the leader of Congress for the Republic party just won four seats and the Democratic Fraction Party from which Mustafa bin Jafar was holding the Presidency of the Parliament failed to even win one seat. The leading position of ‘Call of Tunisia Party’ was just like a surprising event.

Even Ennahda Movement thought that it could hold its first place. However, it had to admit the higher rank of a party which was founded less than three years ago. The success of the party is attributed to skill and charisma of its founder, Beji Caid Essebsi, a person who entered the political scene of Tunisia in 1950s. He has had some positions in Bourguiba and Ben Ali’s administration, he also became prime minister in the government after the revolution. His party has gathered a combination of the leftist forces, syndicalists and businessmen.

Although it has kept none of the officials of the former government in its showcase, its infrastructure is primarily based on the rules and tools of Bourguiba’s Constitutional Democratic Rally whose members were present in different parts of society and have had enough experience. In other words, Essebsi offered a showcase that was politically and socially acceptable and attractive. Then he used the propaganda of raising concerns about the governance of Ennahda Movement among the people, and also benefited from the mistakes of the government.

In such circumstances, it seemed that period was the best opportunity for political currents such as al-Nahda to prove that the secular party of ‘Call of Tunisia’ cannot maintain its internal unity and integration, because what has essentially gathered different currents which sometimes have different approaches to political and ideological confrontation within the party, was to oppose to common threat of Islamic groups. Therefore, in a short period of time and in the intra-party competition, with the aim of gaining more power and higher status, and soon differences led to the separation of a large number of cadres of the leadership and key members of the parliament.

On the other hand, Tunisia is currently facing serious challenges, particularly from lack of financial resources for administration of the country, and extremist terrorist groups having Takfiri thoughts, because the original center of the Islamic Awakening and Jasmine Revolution have faced some kind of political disorganization to the extent that during the last week, protests began from the poor city of Al-Qasrayn and is now expanding to parts of Tunisia, and this has alarmed the Tunisian leaders.

Last year, almost at the same days in the parliamentary elections, Call of Tunisia party won a surprise victory and gained the majority of the Parliament and was able to form the government, headed by the founder of the party, Caid Essebsi. This event was very surprising for many experts who monitored the developments of the Arab world. The question was whether the victory of Call of Tunisia party in Tunisia and the return of technocrats of Ben Ali’s government can be called ‘a social repentance’, and whether people really dislike the Islamist parties and movements, or as some believe this is a tricky game planned by Rachid Ghannouchi and the leadership cadre of Al-Nahda, with a true understanding of the developments in Egypt to maintain the Islamist current of  the Muslim Brotherhood through marginalizing it, so that it can survive this period.

Following extensive protests of the Tunisian youth to current situation and lack of hope for real reform, the question is whether the experience of the rule of secular parties has failed the same way did Ennahda party. In the meantime, Mohsen Marzouk the former secretary-general of Call of Tunisia has been trying to establish a new party with a democratic nature, he enjoys the intelligence and a good charisma among the political process and he is likely to be a serious rival for the Call of Tunisia. Meanwhile, what is remarkable is the fact that al-Nahda party of Rachid Ghannouchi won the majority in the Tunisian parliament which confirms the continued presence of Islamists in the Parliament.

Al-Nahda seems to have kept distance from secular trends and internal disputes and has been constructively engaged with all of them so that it can create a better political atmosphere in the future to make way for the return of the Islamists to power. However, the key point in Tunisia’s political structure is to give more attention to demands of the youth who quickly become tired and desperate of the situation and political conflicts, and find no peaceful way but violence to maintain their own dignity. In the meantime, the misuse of some Salafist extremist political movements from the security and political chaos can cause a lot of risks. Consensus of the groups and political trends in Tunisia and to keep up with the rightful demands of the young people of Tunisia can prevent the political collapse. In this case, Tunisia can make a good example to other Arabic countries.