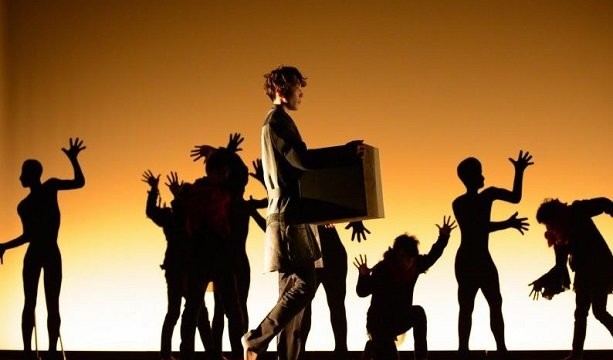 You purchase a ticket for a play, but you get so much more. The Shadow Game, written by Koichiro Iizuka and directed by Tatsuya Hasegawa, is not any typical stage performance. In fact, you should probably leave all your previous understanding of traditional theater performance at the door when you go watch this Japanese production. It is a magnificent combination of dance, music and theater. There are elements of video games and anime plot with Japanese commentary all wrapped up in street and contemporary dance styles choreographed by Hasegawa himself. The Shadow Game is as much a balance between dance and performance as its plot is between light and shadow.

The Shadow Game is a perfect example of visual theater and as such, movement is its central organizing principle. The decision to delve into performance art and bring the elements of street dance onto the stage – where most people believe to be a place of sophistication and high culture – is a risky one, aesthetically and physically, but it is a risk worth taking when the end result is a super performance that exceeds every expectation and manages to communicate ideas and feelings so powerfully and openly that it leaves you breathless even long after the actors have left the stage.

The Shadow Game is at once very ‘Japanese’ and yet far from the traditional Japanese theater. Its plot is a nod to the manga culture featuring a romantic protagonist in search of his missing beloved, a victim of circumstances who rises to the status of a somewhat anti-hero, and an actual hero seeking to save the world from the dominance of shadows. All these characters are set against the overpowering antagonist – the infection, the black rain, the shadow disease – embodied in a corrupt pharmaceutical company ‘Hikari’ which is set to bring Tokyo down to its knees by turning the people into shadows and feasting on the ‘reflective energy’ these shadowy entities generate.

The plot also infuses elements of role-playing video games as it allows the protagonist to choose between two available options that appear on the screen behind them. Tatsuya Hasegawa, the director of the Shadow Game, expressed his love for video games and said the decision to bring this aspect into his performance was a deliberate move in the direction of presenting a more real-life experience to the audience; “we as human beings constantly arrive at various crossroads where we must choose one way over the other, with each way having its own different consequences. I wanted to bring that aspect of life onto the stage,” he said.

But the performance, while maintaining several Japanese elements, is still not considered a typical Japanese play. The focus on dialogue has been shifted entirely to dance (the performers do not utter a single word), and the harmony maintained between the electronic music and the swift, precise body movements and the creative use of stage props such as chairs, umbrellas and for adding more variety to the dance, all set Hasegawa’s production apart from any traditional play.

“Since we are from a dance company, naturally we put more focus on the dance parts and the narrative was developed to bring the work closer to a play. We also tried to create a balance between these two elements so that the audience would not get bored,” he said.

The power of the Shadow Game lies in the way it questions the traditional aesthetics, and attempts to push beyond long-held expectations to make room for discussion of such complex issues like light/shadow dichotomy and how the plot moves beyond the appearance of these two apparently opposing elements to get to their essence; that if light has energy, so does the shadow, a kind of ‘reflective energy’ that can be generated and used in the absence of light.

This dialectical interpretation of light and shadow and the harmonious body movements in the form of hip hop and street dance that in Engelsian terms, depicts the “continual conflict of the opposites and their final passage into one another, or into higher forms” and is in fact a creative reading of the 2011 Great East Japan Earthquake and tsunami which caused the nuclear crisis at Fukushima Daiichi Nuclear Power Plant.

The shutting down of almost all nuclear plants in Japan and the subsequent electricity shortage created huge uncertainty for Japan future growth. As a result of this tragic event, around 16,000 people were killed, 2500 went missing and thousands were forced to evacuate in nuclear plant emergency.

In the Shadow Game, the shadow infection forces people to evacuate their homes, or they will be turned into a black mass and lose their humanity. It is dark times, people are losing hope, but not all is lost. At least, the aesthetics of the dance and the harmony in the actors’ movements with the flowing music promises a way out of the crisis. The search for the missing beloved bears fruition and the shadow king is removed from the game. Tokyo is on the path to recovery now that the shadows have taken their leave.

The Dazzle Company was actually enjoying a second time participation in Fajr International Theater Festival, although ‘The Shadow Game’ participation in the FITF was its first international exposure. Dazzle’s first performance in Iran was during the 30th edition of the FITF in 2012 when Hasegawa staged “Hana to Otori” (“Misty Mansion”) with its very complex stage structure comprised of movable paper doors and the combination of hip-hop, contemporary dance and an ancient Japanese form of dance called nihon buyō. The play was highly praised by audience and critics alike and managed to win the Special Award of the International Section of Fajr festival and the Best Stage Designer Award at the gala.

The 34th Fajr theater festival will come to an end on February 1, and The Shadow Games stands a very good chance of bringing more awards for the talented director.