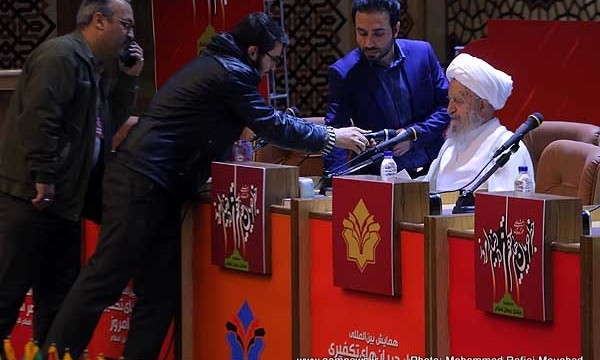 Intl’ conference on fight against takfiri terrorists winds up in Qom

Qom, Jan 28, IRNA – The international conference on ‘Fight against Takfirism’ wound up on Thursday in Qom in the presence of a group of Shia and Sunni ulema from 25 foreign countries along with some domestic scientific and cultural figures.

In the final day, the Ulema issued a final statement to conclude the international conference.

A number of senior Ulema such as Ayatollah Makarem Shirazi and Jafar Sobhani and Supreme Leader’s bureau chief Ayatollah Mohammad Mohammadi Golpaygani, Head of the Strategic Center at the Expediency Council Ali Akbar Velayati along with some other clerics attended the meeting.

The final statement read that Muslim world is now experiencing a very tough time and extremist and Takfiri groups are the root cause of carnage, violence, vandalism and it is among grave responsibilities of Ulema to condemn and deal with such phenomena.

The international conference was held on Thursday, January 18.

Different understandings of Muslims from Islamic teachings is the root cause of such differences of opinions, pointed some scholars in the gathering.