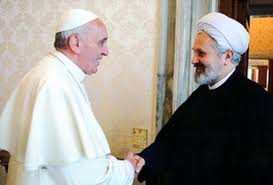 Tehran, January 27, The Iran Project – On the occasion of Iran’s President Hassan Rouhani’s visit to the Vatican, Iranian ambassador to the Holy See explained Iran-Vatican relation, the need to expand it, and the policies and programs which President followed in Vatican visit.

Iran and the Vatican, as the symbols of two religious systems of Islam and Christianity in the world, can collaborate effectively to resolve ethnic and religious disputes and challenges by promoting spiritual and moral values, said Hojatoleslam Mohammad Taher Rabbani, Iran’s ambassador to the Holy See in an interview on Tuesday.

Rabbani stated that in recent years, Iran-Vatican relations have formed on the basis of common principles and mutual understanding of religious and moral teachings of the great prophets.

Expressing concern over the spread of Islamophobia in the West, Iran’s ambassador to the Vatican said that having dialogue with the Vatican and Catholic scholars, Iran can introduce true Islam to the followers of the Catholic Christianity, that include one billion two hundred million people.

Answering the question of what is the Vatican’s political stance toward Iran’s nuclear program, he said that based on the religious teachings, the Vatican is opposed to the proliferation of nuclear weapons in the world so Iran and the Vatican have the same position on the creation of a universal movement for nuclear disarmament.

Elsewhere in his remarks, Rabbani referred to the role of religious leaders in establishing peace and security in the world, saying that Pope Francis’ constructive call for praying for the peace, his role in the prevention of the attack on Syria and strengthening peace coalition in the world, President Rouhani’s call for the world peace, and the letters of Iran’s Supreme Leader to western youth can be a new chapter of effective integration of the world religious leaders to help solve common challenges.

In his visit with the Italian Prime Minister Matteo Renzi and Pope Francis, President Rouhani talked about using bilateral common interests in moral and religious aspects, fighting against the manifestations of secularism and atheism, and strengthening spiritual and divine values, he added.

He went on to say that President Rouhani’s visit with Pope Francis, head of the Roman Catholic Church, will open a new chapter of bilateral and multilateral cooperation.

It is worth noting that the visit was the first meeting of an Iranian president with the leader of the Catholic Christians after 16 years.