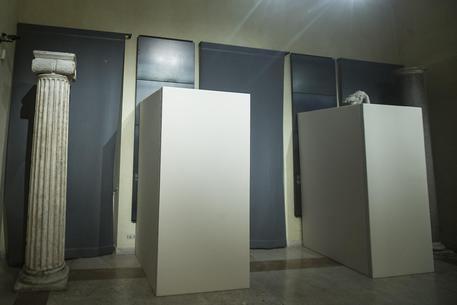 But Rouhani could not admire some of the other masterpieces at Rome’s world-famous Capitoline Museums, which hosted the meeting.

The museum’s naked statues, including a centuries-old Venus, had been covered up in white panels — a decision that provoked some strong criticism in the country.

Italian media reported that the statues had been covered to show respect to the Iranian culture and sensitivity.

A spokesperson for the city of Rome, which manages the museum, said that plans for the meeting had been made by the Office of the Prime Minister. The Italian government has not commented on the matter.

The statues that were covered were in rooms adjacent to the room where Renzi and Rouhani made their joint statement Monday.

The decision infuriated many Italians, who took to social media to express their views. They accuse the government of betraying Italian history and culture for the sake of economic interests and to please the international guest.

Following a diplomatic custom for visiting Muslim dignitaries, no alcohol was served at official receptions.

This is the first time an Iranian president has officially visited Europe in 16 years. Rouhani planned to visit France in November but canceled at the last minute, following the attacks in Paris. The trip comes a few days after the economic sanctions against Tehran were lifted following the implementation of the nuclear deal.