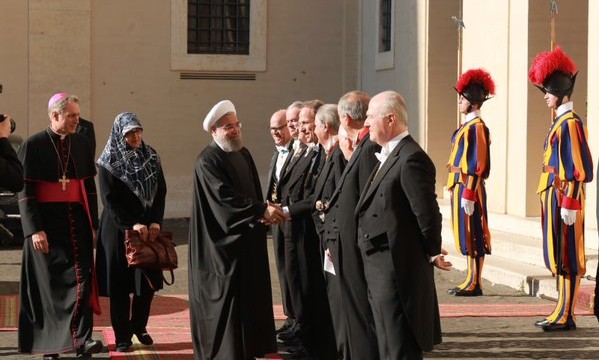 Tehran, Jan 26, IRNA – President Hassan Rouhani and Francis Pope, leader of the Catholic Christians said on Tuesday that divine religions advocate peace and restraint on violence and extremism, calling on the nations to make concerted efforts to establish peace across the world.

During a meeting in Vatican, the two leaders called for further cooperation among the countries and international organizations to alleviate human sufferings and put an immediate end to conflicts and wars.

Nuclear deal and the significance of both sides’ commitments to implementation of the deal, Middle East developments and diplomatic settlement of regional crises were also discussed in the meeting.

It is the first meeting of an Iranian president with leader of the Catholic Christians after 16 years.
Meanwhile, Rouhani reviewed bilateral ties and regional and global developments with Vatican prime minister.
President Rouhani has arrived in Italy on the first leg of his trip to three European destinations following the implementation of a nuclear agreement between Iran and the six world powers.
Rouhani left Tehran early on Monday at the head of a high-ranking delegation.