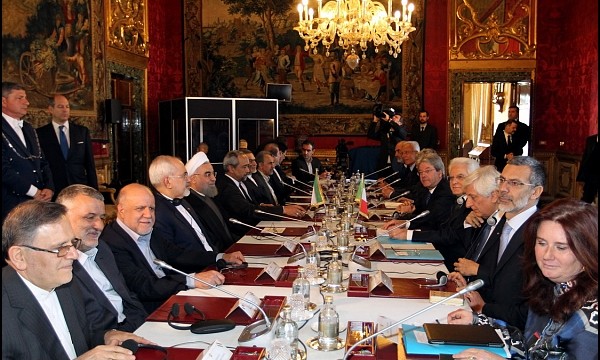 Tehran, Jan 26, IRNA – President Hassan Rouhani said Tuesday in Rome, Italy, that Iran follows a win-win policy in economy as it did so in politics.

The grandson of Ayatollah Ruhollah Khomeini, founder of the Islamic Republic on Iran, has been excluded from contesting elections next month, his son said Tuesday.

Tehran, Jan 26, IRNA – All should know that promoting Namaz is the most effective way to reduce social sufferings, Supreme Leader of the Islamic Revolution said.

The Russian Foreign Ministry said that Russia’s agreement with Iran simplifying visa requirements for tourists, businesspersons and other categories of travellers will take effect in two weeks.

Final stage of Velayat 94 naval drill to be hold Wed.

DUBAI (Reuters) – Italian Prime Minister Matteo Renzi will visit Iran in the coming months to boost economic ties, Iranian President Hassan Rouhani tweeted on Tuesday, during a visit to Rome that has yielded billions of dollars of business deals.

Syria opposition to meet in Riyadh, casts doubt on talks

The Syrian opposition cast doubt on whether it would go to peace talks planned for Friday, throwing U.N. diplomatic efforts into question and accusing the United States of adopting Iranian and Russian ideas for solving the conflict.

Iran to set up trade center in Astrakhan, Russia in 2016

Tehran, January 26, The Iran Project – Iran will set up a trade center in Russian city of Astrakhan in 2016, an official at consulate of the Islamic Republic in the city announced.