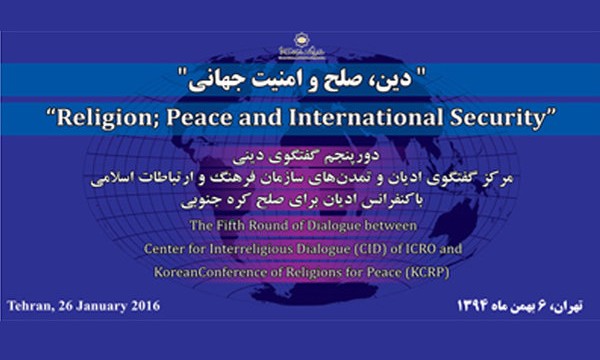 TEHRAN, Jan. 25 (MNA) – The fifth round of religious dialogue between Iran and South Korea dubbed as “Religion, Peace and International Security” will convene in Iran’s capital on Jan.26.

The fifths round of dialogue between Center for Interreligious Dialogue (CID) of the Islamic Culture and Relations Organization (ICRO) and Korean Conference of Religions for Peace (KCRP) will kick off in Tehran on Tuesday to last for two days.

The new course of dialogue will enjoy the presence of numerous Iranian and South Korean keynote speakers, scholars and religious figures.

Muslim and Christian thinkers will present articles on various topics including religions’ recommendations for peace and tranquility, religious dialogue; venues for peace and international security, the role of families and the youth in creating peace and security as well as religions’ attention to protection of the environment.

Previously, the fourth edition of the dialogue between CID and KCRP had taken place South Korea’s capital Seoul last year in January.