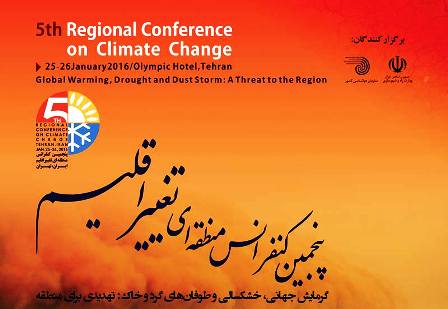 Tehran, January 25, The Iran Project – Fifth Regional Conference on Climate Change kicked off with the attendance of Iranian senior officials and other Iranian and foreign meteorological and environmental scholars and experts in Tehran Olympic Hotel on Monday.

Speaking to the reporters, Sahar Tajbakhsh the executive manager of the conference told that due to the increase in greenhouse gases and following the debates discussed during the 2015 Paris Climate Conference, the Regional Conference on Climate Change was scheduled to be held in Tehran with attendance of Iranian minister of Energy, and Urban Development ministry deputies, Iranian and foreign meteorological and environmental scholars.

“Global warming and reducing its damaging effects on the region is the slogan of this two-day conference” Tajbakhsh said, underlining the drought and dust as two main challenges ahead of the region.

Referring to the participation of heads of environmental science and dust departments of World Meteorological Organization, UNESCO resident representative in Iran and the head of Iran’s National Center for Climatology in this conference, she stated that the event’s debates mainly revolve around monitoring and climate prediction, effects of climate change and the ways to adopting them.

Noting some 250 academic articles submitted to the conference, she highlighted organizing six scientific workshops with the contribution of national and international organizations as the programs scheduled to be held during the two-day conference.

On Monday, the conference hosts Iran’s Energy Minister, Hamid Chitchian and the closing ceremony of the conference is to be held on Tuesday with the Iran Urban Development ministry deputies’ speech at Olympic Hotel in Tehran.