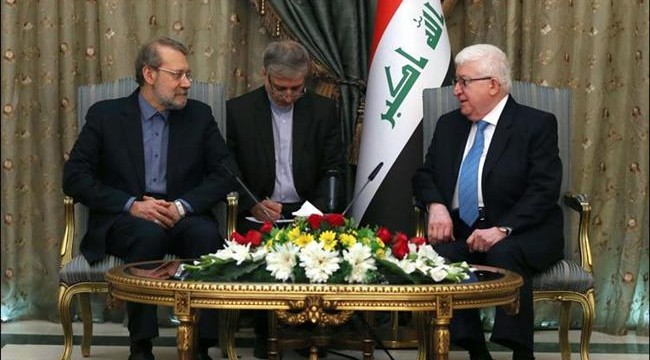 A united and advanced Iraq is important for Iran, Larijani said in a meeting with Iraqi President Fouad Massoum in Baghdad on Monday on the sidelines of the 11th session of Parliamentary Union of the Organization of Islamic Cooperation (PUIC).

Despite growing insecurity in the region, Iraq has managed to improve its national security and is taking steps in this regard, he added.

The Iranian Majlis speaker expressed hope for the resolution of all of Iraq’s security issues as soon as possible.

Massoum, for his part, slammed certain countries for supporting the spread of terrorism in Iraq and said Daesh terrorist group does not confine its ambitions to Iraq and Syria and seeks to establish a global state.

The Iraqi president, however, emphasized that his country requires international support for its campaign against Daesh terrorists but needs no foreign ground forces.

He also hailed Iran’s perennial role in the fight against terrorism in Iraq and across the region.

Massoum said Iraqi forces are fully prepared to stand up against Daesh terrorists and defeat them.

Gruesome violence has plagued the northern and western parts of Iraq ever since Daesh Takfiris launched an offensive in June 2014, and took control of portions of Iraqi territory.

The militants have been committing vicious crimes against all ethnic and religious communities in Iraq, including Shias, Sunnis, Kurds and Christians.

The Iraqi army and fighters from Popular Mobilization Units are engaged in joint military operations to win back militant-held regions.

Larijani arrived in Baghdad at the head of a delegation Saturday night to participate in the 11th session of the PUIC. The Iranian Majlis Speaker held meetings with Iraqi Prime Minister Haider al-Abadi on Sunday and Parliament Speaker Salim al-Jabouri on Monday.