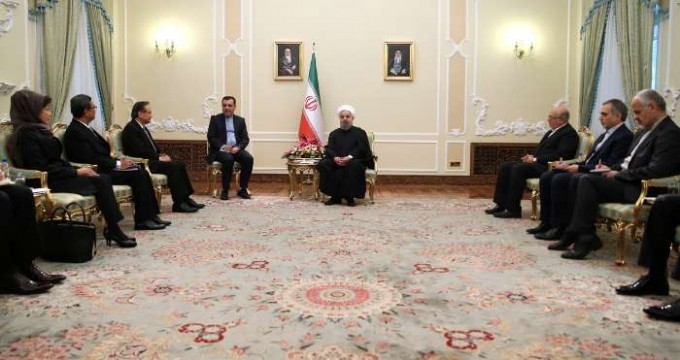 Tehran, Jan 24, IRNA – President Hassan Rouhani said on Sunday that expansion of cooperation between the Association of Southeast Asian Nations (ASEAN) and the Economic Cooperation Organization (ECO) will lead to development of the region.

President Rouhani made the remarks in a meeting with visiting Thai Minister of Foreign Affairs Don Pramudwinai in Tehran on Sunday.
In the meeting, Rouhani welcomed expansion of political, economic and cultural relations between the two countries and said the Islamic Republic of Iran is determined to broaden relations with the Southeastern Asian states such as Thailand.
Ties between the two nations are deeply rooted and the two sides’ investors and traders have maintained cooperation despite problems resulting from economic sanctions, he said, adding that after removal of economic sanctions grounds for expansion of such cooperation have increased dramatically, he said.
Iran and Thailand are to broaden cooperation in cultural, academic and tourism fields, said President Rouhani.
The Association of Southeast Asian Nations (ASEAN) and the Economic Cooperation Organization (ECO) should broaden economic, commercial, scientific, financial and technological cooperation, he said.
Existing problems such as violence, extremism and terrorism which are now threatening the entire region are now spilling over to other parts of the world and so all should join hands to deal with such menaces, he said.
It is very regrettable that certain countries are now backing terrorists financially and logistically, he said.
The Thai foreign minister, for his part congratulated the Islamic Republic of Iran on its success in the nuclear related fields as well as sound implementation of the Joint Comprehensive Plan of Action (JCPOA) and said Iran by relying on skilled manpower can turn into a big economic power in the near future.