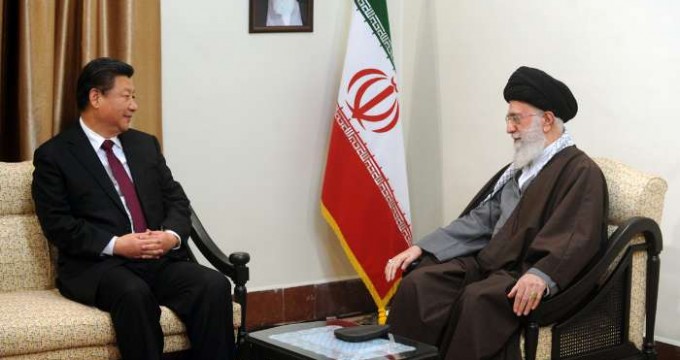 US never sincere in approach: Leader

Leader of the Islamic Revolution Ayatollah Seyyed Ali Khamenei slams the US-led coalition formed with the alleged aim of targeting terrorists in the Middle East, saying Washington has never been honest about its motives.

In a meeting with visiting Chinese President Xi Jinping in Tehran on Saturday, Ayatollah Khamenei said that the US claim of the formation of an “anti-terror coalition” was an act of deception.

“Such is the Americans’ approach to all issues and they are never honest in their conduct,” Ayatollah Khamenei said.

The Leader stated that the Middle East is grappling with insecurity due to the “wrong” policies of Western countries and “a deviant and erroneous” perception of Islam, urging Muslim countries to exercise “prudent cooperation” to stop the escalation of such insecure conditions.

Ayatollah Khamenei added that some regional states are the root cause of the deviant dogma and said Western countries have exerted pressure on Muslims in Europe and the US instead of fighting terrorist groups.

“These terrorist movements are completely different from the actual Islamic ideology,” the Leader said.

Ayatollah Khamenei pointed to the insistence of Western media and governments, particularly in the US, on using the term “Islamic State” to refer to certain terrorist groups, saying, “This approach is an insult to Muslims and instead of remedying the problem indirectly brings about the grounds for the reinforcement of these groups.”

The Leader stated that the “hostile policies” by the US have pushed the Iranian people and officials to “pursue the expansion of relations with independent countries.”

Pointing to the hegemonic policies of certain states, particularly the US, and their dishonest cooperation with other countries, Ayatollah Khamenei stated that independent countries seek to promote their cooperation under such circumstances.

Ayatollah Khamenei further pointed to the deep-rooted trade and cultural relations between the Iranian and Chinese nations and said, “The Iranian government and nation have always sought and still seek to expand ties with independent and reliable countries such as China.”

The Leader described as “entirely correct and judicious” the bid by the Iranian and Chinese presidents to draft an agreement that envisages the establishment of 25-year strategic relations, adding that Tehran and Beijing should firmly follow up on the deal to secure its implementation.

Ayatollah Khamenei also welcomed the position of the Chinese president about the necessity of the revival of the “Silk Road” and the expansion of cooperation among countries on its path.

The Leader added that the Islamic Republic of Iran will never forget China’s cooperation during the era of Western sanctions imposed on Tehran over its nuclear program.

Elsewhere, Ayatollah Khamenei cited “energy” as one of the most pressing issues in the world and stated that Iran is the “only independent country in the region which can be trusted in the field of energy because unlike some regional countries, Iran’s policy on energy will never be affected by any non-Iranian factor.”

The Chinese president on Saturday held talks with his Iranian counterpart Hassan Rouhani, during which the two sides discussed the latest mutual and regional developments.

Iran and China signed 17 documents for cooperation in economic, industrial, cultural and judicial fields in the presence of the two countries’ presidents.

Xi arrived in Tehran on Friday at the head of a politico-economic delegation. His visit is the first by a Chinese president to Iran in 14 years.