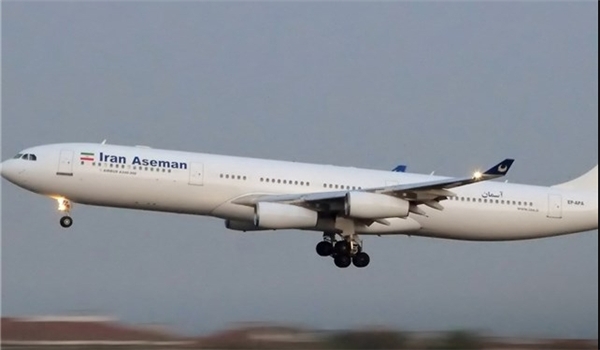 10 new planes to be added to Iran’s air fleet in weeks: Official

TEHRAN (Tasnim) – An Iranian aviation official said the country plans to import 10 new passenger planes to add them to its air fleet by the end of the current Iranian year (March 19, 2016).

Speaking to reporters on Saturday, Mohammad Khodakarami, deputy head of Iran’s Civil Aviation Organization (CAO), highlighted the increasing demand for flights during Nowruz (the Iranian New Year) holidays and said 10 new airplanes will be imported to the country by year-end to meet the demand.

He further touched upon the CAO’s plans to renovate the country’s air fleet in the near future, saying that out of the 250 airplanes in the fleet, 95 have been out of service.

The aviation official added that given the atmosphere created after the implementation of the nuclear deal between Tehran and six world powers, known as the Joint Comprehensive Plan of Action (JCPOA), and termination of anti-Iran sanctions, the CAO is seeking to put the 95 aircraft into operation.

The remarks came as US President Barack Obama on January 15 empowered the Secretary of State to allow the export of civilian passenger aircraft to Iran.

Back in April 2015, the head of the CAO had said that Iran needs to buy up to 500 passenger planes in the next 10 years to renovate its aging fleet.