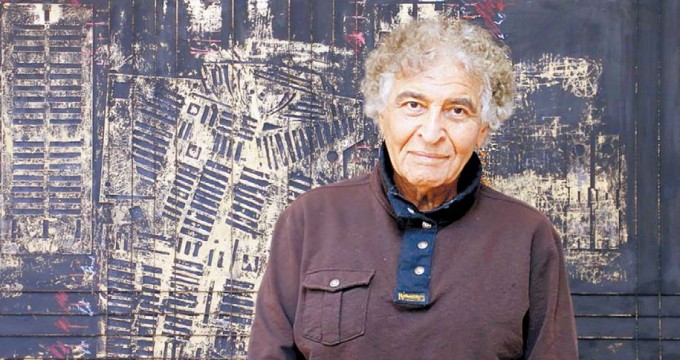 A painting collection on “a review of experiences and performed works” by Iranian veteran artist Massoud Arabshahi, is on display at Shahrivar Art Gallery in Tehran.

After a 10 year hiatus from his last exhibition, the current exhibit aims to provide the opportunity for researchers and students of art to further investigate and scrutinize works of the artist, ISNA reported.

The paintings clearly indicate the influence of his research in the fields of ancient history and culture, specifically that of Iran.

“Signs and symbols played an important role in the process of his artistic development and the sources of inspiration can be easily identified through the symbols in his collection,” said well-known artist and art historian, Ruyin Paakbaz in his comments on Arabshahi’s paintings.

However, most of the motifs used in his works are of abstract form and “only rarely can one see images of ancient elements in his drawings,” Paakbaz noted.

Iranian mythologist Abolqasem Esmailpour also described Arabshahi’s paintings as amazing and said his works stupefies every spectator at first glance, because “he has found the secrets of eternity and his paintings have a steely and frightening firmness.”

Described as one of the most imaginative Iranian painters, who employs a wide range of media from gold leaf to oil, symbols from ancient Mesopotamia to the most universal ones, brushstrokes ranging from heavy impasto to the very lightest, Arabshahi’s magnificent production is, nevertheless, construed around one simple idea: the search for purity and glamour.

Coherence in form, mathematical signs mixed with the artist’s special frenzy for warm colors, and chiefly decorated with golden hues, are the characteristics of his artworks, which, in Esmailpour’s view, “are responsible for the survival of the works.”

Arabshahi’s works are the result of his research in art history covering several eras, including the Achaemenid (550–330 BC) and Parthian (247 BC-224 AD).

The exhibition will continue through February 12 at the venue located at No.9, Hormoz Alley, North Khazar St., Elahieh Avenue.

Massoud Arabshahi, 81, is a celebrated Iranian painter, who took Achaemenid and Assyrian art as well as Babylonian carvings and inscriptions as his sources of inspiration. A combination of tradition and modernity, his work has been featured in a number of solo and group exhibitions in Iran, Europe and the United States including ‘Two Modernist Iranian Pioneers’, at the Tehran Museum of Contemporary Art, 2001, and ‘Iranian Contemporary Art,’ Barbican Center, London, 2001.

Arabshahi held his first solo exhibition at the Iran-India Center, Tehran, in 1964, four years before graduating from the College of Decorative Arts, Tehran. His work includes oils on canvas, sculptures and architectural reliefs.

He has also been conferred several awards including the Ministry of Arts and Culture prize at the 4th Tehran Biennial (1964), the first prize at the public contest for sculpture ornament at the Farahabad Park, held in Tehran in 1972, and the first prize in the Monaco International Exhibition (1973).