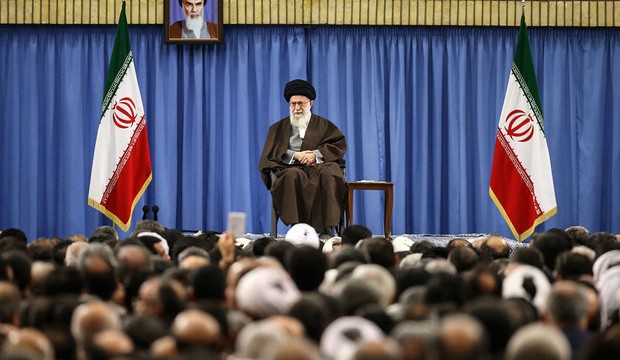 The Leader of the Islamic Revolution Ayatollah Seyyed Ali Khamenei says the nuclear deal reached between Iran and world powers was result of endeavors of Iranian nation and scientists, not a US favor.

Referring to Iran’s nuclear agreement with world powers, also known as Joint Comprehensive Plan of Action (JCPOA), the Leader said, “Some people want to make it look as if the achievements made [were made because] the US did us some kind of favor. But this is not the case.”

“The JCPOA was an important and great event,” the Leader said, noting, “It is not as if all our demands were met, but the scale of the demands that were met, [it was because of the efforts made by] the [nuclear] negotiating team and [Foreign] Minister [Mohammad Javad Zarif] and President [Hassan Rouhani].”

“This [nuclear achievement] was the result of endeavors of Iranian nation and scientists,” the Leader emphasized, adding, “I personally believe that we could have done better than this, of course, the ability and opportunity and potential necessitated this [much]; [and of course,] even this degree [of success] is an important work.”

Ayatollah Khamenei advised state officials and the national committee set to monitor the implementation of JCPOA to be careful and do not allow the opposite side to cheat in implementing the nuclear deal.

“[Officials] must be watchful against deceit and be careful that what they [the opposite sides] are doing complies with their real commitments. If they see any cheating from the other side, they must respond in kind. If the opposite side breaches its promise, this side must also breach its promise,” the Leader added.

“[Now] sanctions have been lifted, [but] will people’s livelihood problem be solved? No; I have said both in this government and in the past government that 20-40 percent of economic problems may be related to sanctions; the rest is related to us; we must act correctly. [To overcome economic problems] planning and [good] management are needed,” Ayatollah Khamenei said.

The Leader also praised the recent move by the Islamic Revolution Guards Corps (IRGC) to seize two US Navy vessels that had intruded into Iranian waters in the Persian Gulf and to take into temporary custody the 10 sailors aboard them, adding, “Politicians should act similarly: see where they (enemies) cross the lines, and stop them in their tracks.”

Iran and the P5+1 group of countries – the United States, Britain, France, China, and Russia plus Germany – reached the JCPOA in July 2015. The deal came into force on Saturday, January 16, known as the “Implementation Day.”