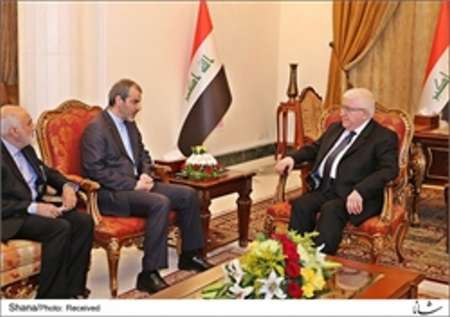 Iran reaffirms support for Iraq in fight against terrorism

Baghdad, Jan 18, IRNA – Iranian ambassador to Baghdad Hassan Danaeifar on Monday voiced Tehran’s readiness to continue with its support for Iraq in the campaign against terrorism.

Danaeifar made the remarks during a meeting in Baghdad with Iraqi President Fuad Masum.
During the meeting, Danaeifar and the Iraqi president explored ways for further promotion of bilateral relations.
Danaeifar expressed hope that cooperation between the two neighboring countries would promote pace and stability in the region.
The Iraqi president, too, for his part welcomed the official implementation of Iran nuclear deal and the subsequent termination of the nuclear sanctions against Tehran.
President Masum said that he hoped this success would help promote peace and friendship in the region.
Meanwhile, the Iraqi ambassador to Iran had issued a statement earlier in the day congratulating the Iranian nation on implementation of the nuclear deal.