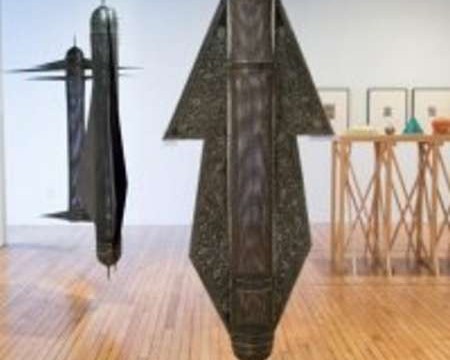 Organized by the gallery director, Lynn Gumpert, “the show looks great” and the switch was possible as some of the art was already in hand, reports the NY Times.
In the 1960s, the gallery’s founding patron, Abby Weed Grey (1902-1978), traveled to Iran, loved the new art she found there, bought it up and gave it to NYU. As a result, the Grey has the largest holdings anywhere of work by one of the show’s six artists, Parviz Tanavoli, widely considered Iran’s leading modern sculptor and outstanding examples of paintings by his brilliant colleague Faramarz Pilaram.

To these two modernists Gumpert has added a fascinating figure of a more recent generation, the late Chohreh Feyzdjou, who died at age 40 in 1995. Finally, bringing the show into the present are three young artists — Shiva Ahmadi, Barbad Golshiri and Shahpour Pouyan.

When Tanavoli began making sculpture, he had few local models to follow. His 1962 “Figure and Hand” suggests a stack of bazaar-bought pots and pans with a Surrealist overlay. A decade later, in his well-known bronze “Heech,” (literally nothing) he seamlessly united three calligraphic characters spelling the Persian word for nothing into a single, Brancusi-sleek curve.

Feyzdjou in 1975 moved to Paris, where she concentrated on painting until she encountered the archive-based installation art of Christian Boltanski.
One such installation has been reconstructed at the Grey. Boltanski’s influence in the insistent gloom can be seen, which would look blankly generic were it not for Feyzdjou’s personal touches: drawings in notebooks, identifying labels attached to objects like baggage tags and a purple neon sign reading “Product of Chohreh Feyzdjou.”

Interestingly, the art made by the show’s younger artists, Ahamadi and Pouyan, spin variations on a specifically Persian style of miniature painting with references to the royal epic the “Shahnama,” or “Book of Kings.”

As a genre, miniature painting, common to Asian cultures, has been adopted by many artists. Ahmadi’s riffs on it grow more effective the further they expand in scale, as in the mural-size “Safe Haven” from 2012. And Pouyan is at his best in another medium, sculpture. His “Projectiles” series of suspended steel forms suggest both antique weapons and drones poised to launch.

Golshiri, who was born in Tehran in 1982, focuses attention on a madly huge subject, one with equal local and global presence: death. He takes a near-universal emblem of it, the tombstone, as an art medium. Given his interest in art as memory, and memory as history – he considers cemeteries and museums to have comparable functions. (Financial Tribune)