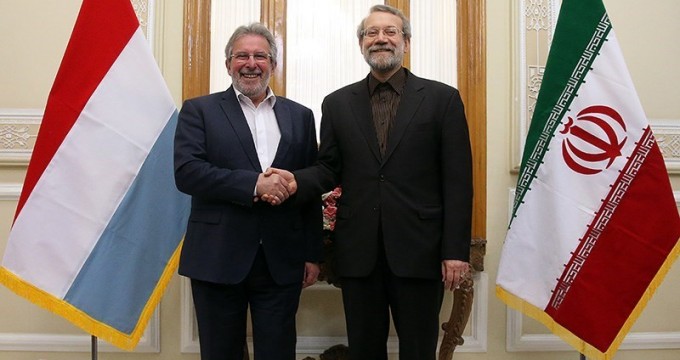 TEHRAN (Tasnim) – The President of Luxembourg’s Chamber of Deputies highlighted Iran’s constructive role in the region and in the battle against terrorism, stressing that confronting the phenomenon requires all-out international cooperation.

Luxembourg is ready to cooperate with the Islamic Republic on fighting terrorism, Mars Di Bartolomeo said Saturday during a joint press conference with his Iranian counterpart Ali Larijani in Tehran.

Stressing that terrorism is a global issue and that Iran cannot uproot it single-handedly, he called for all-out cooperation against it at the international level.

He also hailed last year’s nuclear deal between Iran and six world powers, saying “this opportunity ought to be seized” and efforts should be made in line with restoring peace and security across the globe.

His visit to Iran came a couple of months after the European country’s Foreign Minister Jean Asselborn made a trip to Tran in late November 2015, during which he met senior Iranian officials including his counterpart Mohammad Javad Zarif and President Hassan Rouhani.

Luxembourg, officially the Grand Duchy of Luxembourg, is a landlocked country in Western Europe. It is bordered by Belgium to the west and north, Germany to the east, and France to the south.

The European state was one of the countries that played host to the nuclear talks between Iran and the Group 5+1 (Russia, China, the US, Britain, France, and Germany), which ended in a comprehensive nuclear deal back in July 2015.

Iran and the Group 5+1 (also known as E3+3 and P5+1) on July 14 reached a conclusion on a 159-page nuclear agreement that would terminate all sanctions imposed on Tehran over its nuclear energy program after coming into force.

According to the UNSC Resolution 2231, all previous UNSC sanctions imposed on Iran over its nuclear program will be terminated when the JCPOA takes effect.