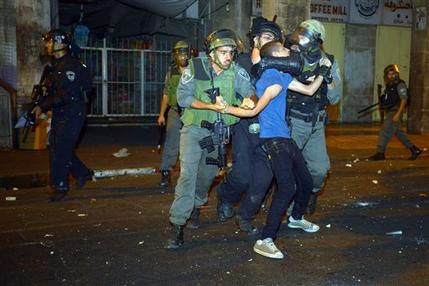 Tehran, January 12, The Iran Project – A Palestinian prisoners’ rights group says majority of the detainees from East al-Quds in 2015 have been minors. The released figures by the group show that some 1900 Palestinians were detained in the city two third of whom were children.

Releasing a statement on Sunday, the Palestinian Prisoners’ Center announced that nearly two-thirds of the arrested people in East al-Quds were children, 65 of whom were put under the house arrest.

The statement also slammed Israeli policy to use house arrest against the Palestinians under the age of 14, explaining it a way to “turns the child’s house itself to a prison and family members to wardens.”

It also further stated that “this is a belligerent military attack on the university and our right to education and all the principles involved in the freedom of education.”

Meanwhile, Israeli forces arrested at least 60 Palestinian workers under the pretext of entering the north of Israeli without work permit. Israeli police spokesperson alleged that the measure was a “general operations” against Palestinians working illegally in Israel.

Elsewhere in Jenin, Israeli forces opened fire wounding an 18-year-old Palestinian on Monday in south of the city. Israeli military spokesperson alleged that he attempted to stab and Israeli soldier.