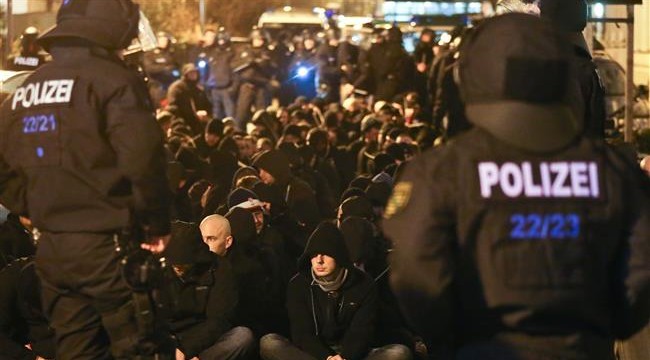 Hundreds of masked hooligans have wreaked havoc in the German city of Leipzig to mark the birth anniversary of a far-right anti-Islam PEGIDA offshoot.

They also attacked with stones a producer with the Russian news agency Ruptly who was filming the violence from an apartment window.

Elsewhere in Leipzig, several thousand anti-refugee protesters rallied, chanting, “We are the people,” “Resistance!” and “Deport them!”

The protests were met by rival rallies attended by thousands of people.

The counter-demonstrations triggered a heavy presence by the police, who had water cannons but did not deploy them.

PEGIDA, a German acronym that stands for the “Patriotic Europeans against the Islamization of the West,” is represented in Leipzig by LEGIDA.

Since last year, LEGIDA has mobilized thousands of xenophobes across the city against Chancellor Angela Merkel’s decision to open the country’s doors to refugees.

More than one million refugees reached Germany in 2015, mostly fleeing the conflict in Syria.

PEGIDA began to launch rallies in Germany in October 2014 and managed to attract supporters across the country.

The group was caught in a series of scandals, prompting mass resignation among its leaders and the movement’s disappearance from the German political scene last year.

However, PEGIDA has made a comeback in the wake of the refugee influx which has caught Europe off guard.