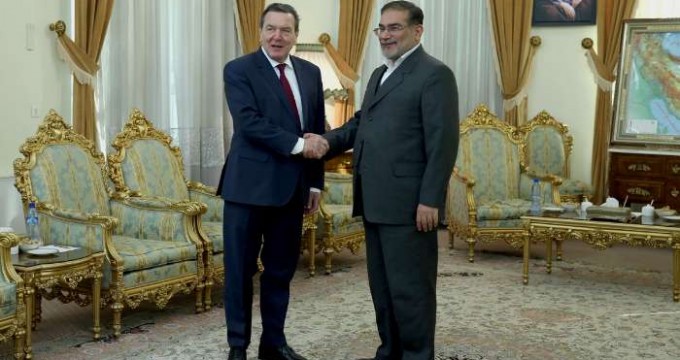 Tehran, Jan 11, IRNA – Secretary of the Supreme National Security Council (SNSC) on Monday urged international and regional fight against those countries which help create a breeding ground for terrorist groups like Daesh.

Ali Shamkhani made the remarks in a meeting with visiting ex-German Chancellor Gerhard Schroder.

Saudi Arabia should select either to support Takfiri groups in order to destabilize the region or step onto the path towards the real cooperation and constructive interaction in line with ensuring security and stability, said Shamkhani.

Appreciating Germany’s role in intensive nuclear talks before reaching the landmark July 14 agreement, Shamkhani said today is a proper opportunity for accelerating the process of economic cooperation regarding the time of implementation of nuclear agreement which is so close.

Iran’s stable policies in the region as well as its efforts to create a safe atmosphere for investment have attracted foreign companies to invest in the country, he said.

He further stressed importance of preventing the endeavors, made by Saudi Arabia, the Zionist regime and extremists in the US, from putting hindrances to the implementation of the nuclear agreement, better known as the Joint Comprehensive Plan of Action (JCPOA).

On the contrary to all those efforts, Iran is willing to widen its (international) relations in line with solving the existing crises, he added.

Referring to the recent damage to the Saudi Embassy in Tehran caused by ‘illegal’ gathering in front of that compound, Shamkhani said Iran will take serious action towards such elements.

He added Tehran is faithful to its commitments according to the international conventions.

After execution of Sheikh Nimr al-Nimr, a prominent Shia cleric, a group of youth gathered ‘illegally’ in front of Saudi Embassy in Tehran and damaged the embassy’s building on January 2.

The Police forces arrested a number of demonstrators.

Anti-Iran propaganda that spread out by Saudi Arabia on the pretext of the issue of its embassy in Tehran is not welcomed, said Shamkhani adding such Saudi move is definitely not a constructive measure.

A day after the event, Saudi foreign minister announced on January 3 that Riyadh severed its diplomatic relations with Tehran.

Iran’s First Vice-President Eshaq Jahangiri commented on the Saudi announcement saying cutting ties with Iran is detrimental to Riyadh not to Tehran.

On Tehran-Berlin relations, Shamkhani said Iran is ready to cooperate with Germany in exchanging nano, technological, nuclear and energy fields.

For his part, the German politician said his country and the European states are against fanning the flames of religious conflicts.

He further stressed expansion of cultural and economic cooperation between the two nations during the post-sanctions era.

Condemning the Saudi measure to execute Sheikh al-Nimr, Schroder called such actions against the efforts to decrease tension and ensure stability.

On the issue of Syria, he stressed importance of avoiding policies on calling for the precondition for start of the related talks.

Referring to Iran’s constructive role in solving the Syrian crisis, he said Berlin in ready to have further cooperation with Iran regarding that issue.