THE world will soon celebrate the implementation of the landmark agreement that resolves the unnecessary, albeit dangerous, crisis over Iran’s nuclear program. All parties hoped, and continue to believe, that the resolution of the nuclear issue would enable us to focus on the serious challenge of extremism that is ravaging our region — and the world.

President Rouhani has repeatedly declared that Iran’s top foreign policy priority is friendship with our neighbors, peace and stability in the region and global cooperation, especially in the fight against extremism. In September 2013, a month after taking office, he introduced an initiative called World Against Violence and Extremism (WAVE). It was approved by consensus by the United Nations General Assembly, giving hope for a farsighted global campaign against terrorism.

Unfortunately, some countries stand in the way of constructive engagement.

President Hassan Rouhani in Tehran, Iran.Editorial: Iran’s Other Scary Weapons ProgramJAN. 11, 2016
Following the signing of the interim nuclear deal in November 2013, Saudi Arabia began devoting its resources to defeating the deal, driven by fear that its contrived Iranophobia was crumbling. Today, some in Riyadh not only continue to impede normalization but are determined to drag the entire region into confrontation. 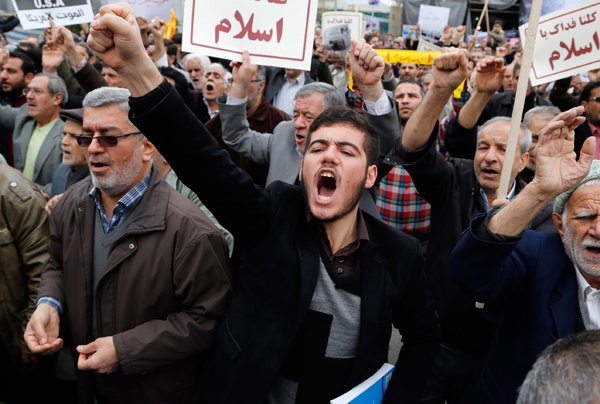 Saudi Arabia seems to fear that the removal of the smoke screen of the nuclear issue will expose the real global threat: its active sponsorship of violent extremism. The barbarism is clear. At home, state executioners sever heads with swords, as in the recent execution of 47 prisoners in one day, including Sheikh Nimr al-Nimr, a respected religious scholar who devoted his life to promoting nonviolence and civil rights. Abroad, masked men sever heads with knives.

Let us not forget that the perpetrators of many acts of terror, from the horrors of Sept. 11 to the shooting in San Bernardino and other episodes of extremist carnage in between, as well as nearly all members of extremist groups like Al Qaeda and the Nusra Front, have been either Saudi nationals or brainwashed by petrodollar-financed demagogues who have promoted anti-Islamic messages of hatred and sectarianism for decades.

The Saudi strategy to derail the nuclear agreement and perpetuate — and even exacerbate — tension in the region has three components: pressuring the West; promoting regional instability through waging war in Yemen and sponsoring extremism; and directly provoking Iran. Riyadh’s military campaign in Yemen and its support for extremists are well known. Provocations against Iran have not grabbed international headlines, primarily thanks to our prudent restraint.

The Iranian government at the highest level unequivocally condemned the assault against the Saudi embassy and consulate in Tehran on Jan. 2, and ensured the safety of Saudi diplomats. We took immediate measures to help restore order to the Saudi diplomatic compound and declared our determination to bring perpetrators to justice. We also took disciplinary action against those who failed to protect the embassy and have initiated an internal investigation to prevent any similar event.

By contrast, the Saudi government or its surrogates have over the past three years directly targeted Iranian diplomatic facilities in Yemen, Lebanon and Pakistan — killing Iranian diplomats and locals. There have been other provocations, too. Iranian pilgrims in Saudi Arabia have endured systematic harassment — in one case, Saudi airport officers molested two Iranian boys in Jeddah, fueling public outrage. Also, Saudi negligence was to blame for the stampede during the recent hajj, which left 464 Iranian pilgrims dead. Moreover, for days, Saudi authorities refused to respond to requests from grieving families and the Iranian government to access and repatriate the bodies.

This is not to mention the routine practice of hate speech not only against Iran but against all Shiite Muslims by Saudi Arabia’s government-appointed preachers. The outrageous beheading recently of Sheikh Nimr was immediately preceded by a sermon of hatred toward Shiites by a Grand Mosque preacher in Mecca, who last year said that “our disagreement with Shiites will not be removed, nor our suicide to fight them” as long as Shiites remained on the earth.

Throughout these episodes, Iran, confident of its strength, has refused to retaliate or break — or even downgrade — diplomatic relations with Saudi Arabia. We have until now responded with restraint; but unilateral prudence is not sustainable.

Iran has no desire to escalate tension in the region. We need unity to confront the threats posed by extremists. Ever since the first days after his election, the president and I have indicated publicly and privately our readiness to engage in dialogue, promote stability and combat destabilizing extremism. This has fallen on deaf ears in Saudi Arabia.

The Saudi leadership must now make a choice: They can continue supporting extremists and promoting sectarian hatred; or they can opt to play a constructive role in promoting regional stability. We hope that reason will prevail.