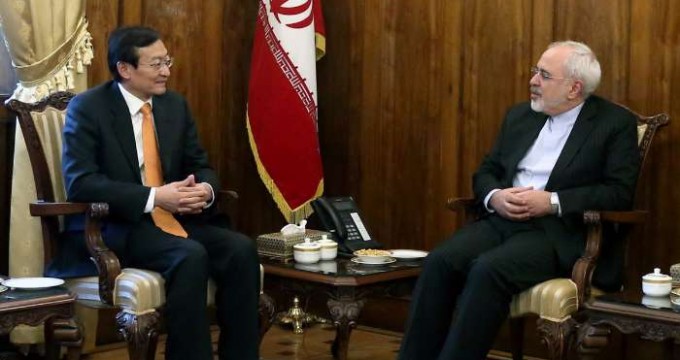 Zarif made the comment in a meeting with the visiting Chinese Deputy Foreign Minister Jang Ming.
Zarif and the Chinese senior diplomat surveyed bilateral ties, as well as regional and international developments.
‘Iran-China relations are by nature different from our country’s ties with the other countries, as Tehran and Beijing have common stand and therefore in the post-sanctions era relations and cooperation with China will be firm and expanding,’ he said.
Jang Ming, said in the meeting that the two countries’ relations are growing and China is very pleased with the Joint Comprehensive Plan of Action bearing fruit.
‘The Chinese president’s near future state visit of Iran after 14 years will mark the beginning of a new chapter in the two counties’ relations and this will be his first foreign visit in the year 2016,’ he added.
The Chinese deputy FM meanwhile praised Tehran’s détente policy in the region and the world saying that Beijing is pursuing the same policy in the Far East and the international scene.