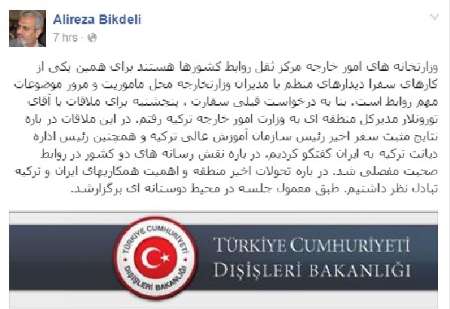 Iran’s ambassador to Turkey denies rumor on being summoned

Tehran, Jan 8, IRNA – Iran’s Ambassador to Turkey Ali-Reza Bigdeli in a note in his Facebook page on Friday rejected as totally baseless some yellow media reports on his being summoned to the Turkish Foreign Ministry on Thursday.

He wrote that the other topics addressed in the meeting with the Turkish diplomat included the positive effect of the two Turkish officials’ upcoming visit of Iran and the role played by the two countries’ media in bilateral ties.
‘We also discussed the major regional developments and were agreed on the great importance of cooperation between Iran and Turkey in dealing with them,’ he wrote.
The Saudi Al Arabiyya news network had earlier claimed that Turkey had summoned the Iranian ambassador to question him Tehran-Riyadh ongoing dispute.

An informed source in Iranian Foreign Ministry had earlier said that the objective behind such false news’ broadcasting by Saudi and Zionist media is conveying the idea in world public opinion that the Saudi efforts in establishment of an anti-Iranian coalition is gaining momentum, despite the sheer fact on the ground that the Saudis are burning in the various fires they have lit in the region.