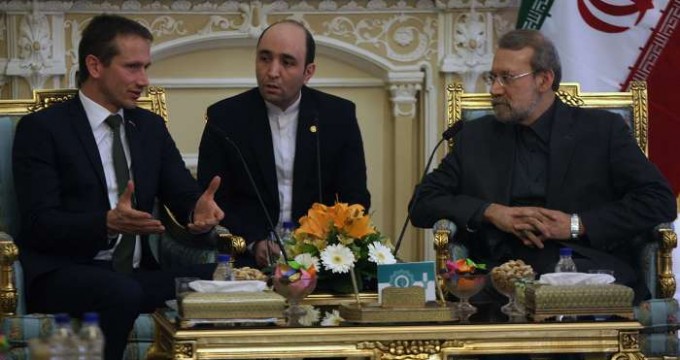 Larijani: All countries should reach common understanding in fight with terrorism

Tehran, Jan 4, IRNA – Majlis speaker Ali Larijani said on Monday that all countries should reach a common understanding in fight against terrorism and adopt a unified stand.

Larijani made the remarks in a meeting with visiting Danish Foreign Minister Kristian Jensen in Tehran on Monday.
Iran is to broaden economic cooperation with Denmark in generation of energy, producing pharmaceuticals and agriculture, he said.
Iran has adopted some new laws to ease investment in the country and the grounds are now well prepared for expansion of economic and commercial cooperation between the two countries, he said.
Danish foreign minister, for his part called for expansion of economic cooperation between Iran and Denmark and said the current visit of a Danish delegation indicates the country’s willingness to broaden relations with Iran.
Denmark has invaluable experiences in generation of energy, renewable energies and wind turbines and is ready to transfer the 25 years of experience to Iran, he said.
The final deal between Iran and G5+1 and the Joint Comprehensive Plan of Action (JCPOA) is of prime importance for the entire world, he underlined.
Since Iran has proven its good faith implementing the JCPOA, it is expected to witness lifting sanctions immediately at the earliest along with expansion of all-out economic relations between Iran and European countries.
Denmark is determined to fight with terrorism and spares no efforts to help restore peace and security in the world, said the Danish foreign minister.
Terrorism has destabilized the world and it is among duties of all countries to fight and eradicate it, he said.
Relation between Iran and Denmark is deeply rooted and it is expected to witness further expansion of relations and cooperation between the two countries, he said.
Danish foreign minister, leading a delegation arrived in Tehran on Sunday evening and conferred with the country’s high ranking officials on issues of mutual interests and regional and global developments.