A look at Iranian newspaper front pages on Jan. 5

The comments of the Supreme Leader about the upcoming elections and the decision by Saudi Arabia and a couple of other Arab countries to cut ties with Iran dominated the front pages of Iranian newspapers on Tuesday.

Ettela’at: The establishment relies on the votes of the public, said the Supreme Leader at a meeting with Friday prayer leaders from across the country.

Ayatollah Khamenei further said that protecting the votes of the nation is a right people are entitled to.

Highlights of Ettela’at newspaper on Jan. 5 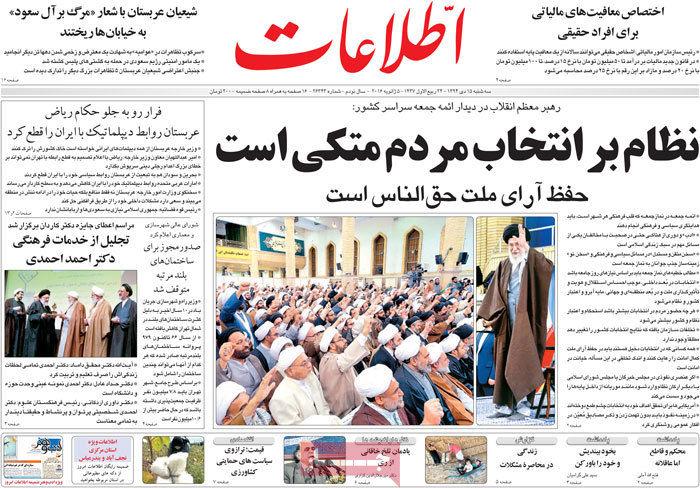 Abrar: The Afghan Chief Executive Officer has arrived in Tehran for a state visit. 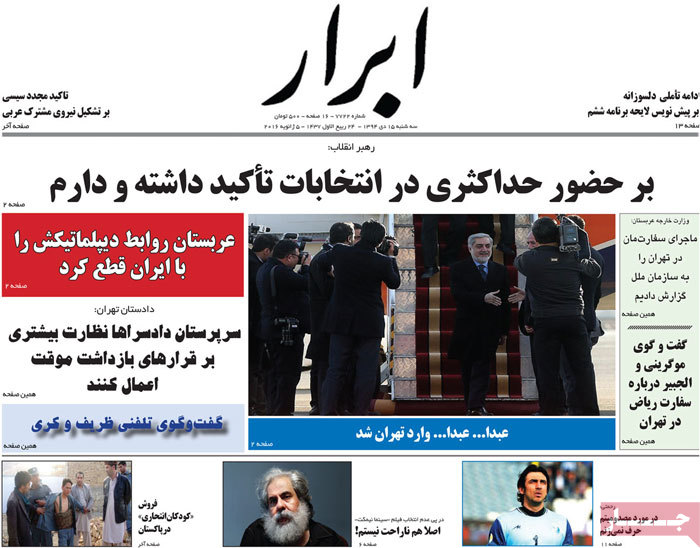 Afkar: The Supreme Leader has said that the US has designs on the upcoming elections in Iran.

Aftab-e Yazd: The young Khomeini [a reference to Seyyed Hassan Khomeini who has signed up to run for the Assembly of Experts] has not been asked to take a test on Ijtihad [independent reasoning].

The spokesman of the Guardian Council has said that those who have high levels of scholarly knowledge won’t have to take the test. 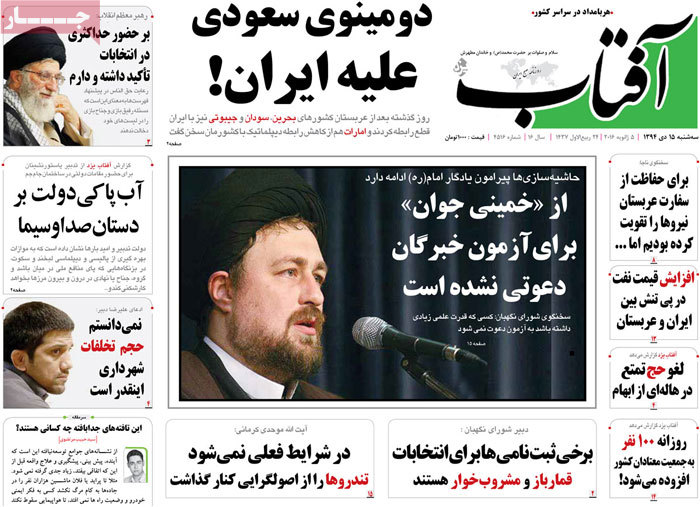 Arman-e Emrooz: The US acting as a mediator for peace?

Foreign Minister Zarif and Secretary Kerry have talked [over the phone] about ties between Tehran and Riyadh.

Arman-e Emrooz: Mohammad Reza Bahonar has said that he has received no money from former vice-president Mohammad Reza Rahimi [who is serving jail term for corruption].

The current vice-speaker of the Islamic Consultative Assembly, who is not seeking reelection, also said that the speaker is not happy with his decision not to run in the late February elections. 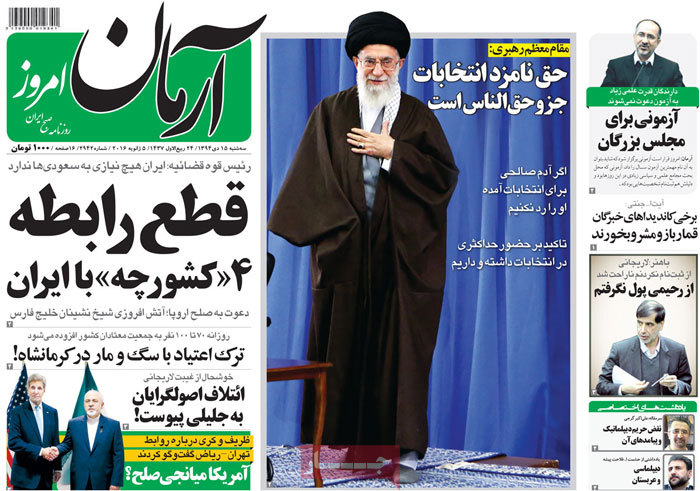 Asrar: A spokesman for the Interior Ministry has said that the performance of security forces in handling the attack on the Saudi Embassy will be reviewed.

Asrar: The fire terrorists have lit will sooner or later catch up with those who sponsor terror, said Chairman of the Expediency Council Ayatollah Akbar Hashemi Rafsanjani. 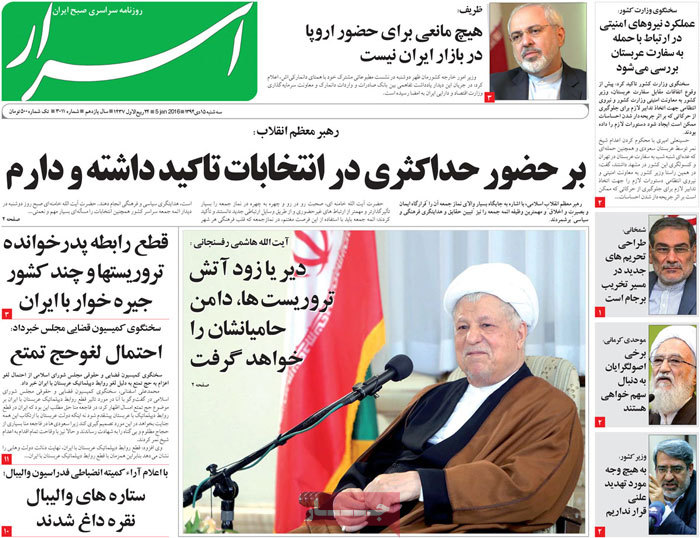 Etemad: Insanity on the Peninsula

The Saudi government has cut its economic and diplomatic ties with Iran under the pretext of an attack on its Tehran Embassy.

Bahrain and Sudan followed suit and the UAE downgraded its relations to the level of chargé d’affaires. 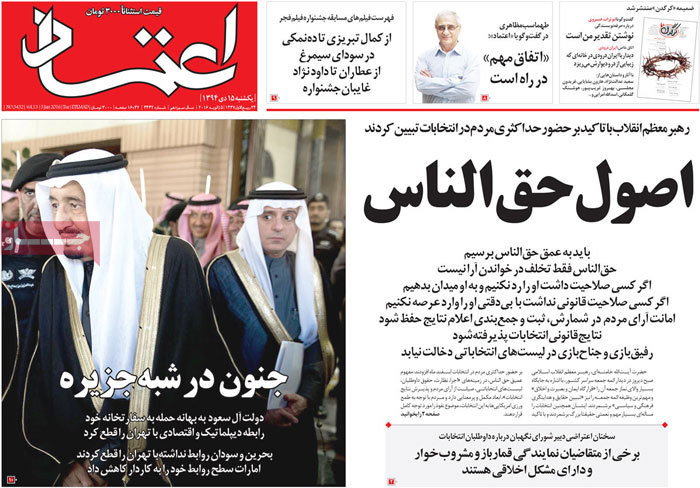 Ghanoon: Days of a diplomatic breakup

Russia has signaled readiness to act as a mediator between Iran and Saudi Arabia. 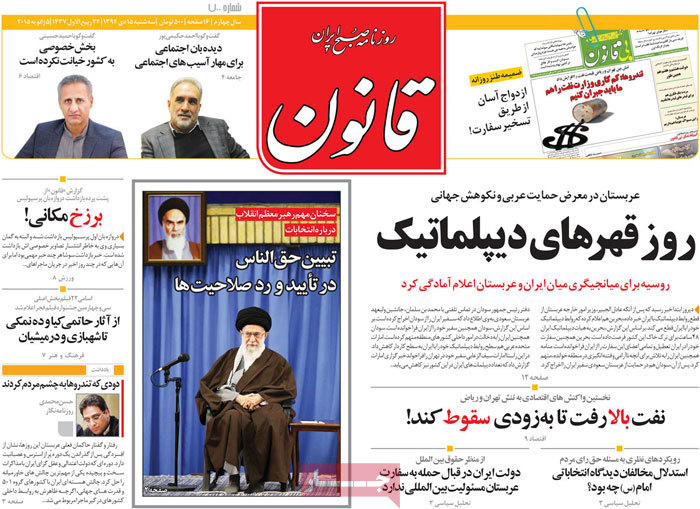 Hemayat: Iran does not need the Saudis or their masters, said the Judiciary chief.

Ayatollah Sadegh Amoli Larijani further said that Iran’s nuclear capability is not negotiable and all officials agree that measures need be taken to boost such capability. 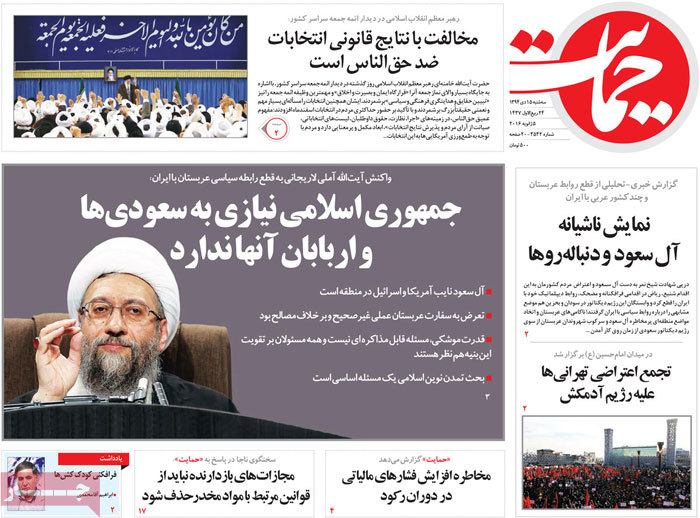 Iran: The Judiciary chief has said that the attack on the Saudi Embassy in Tehran was against the country’s national interests.

Iran: The first vice-president has said that easing the problem of unemployment is the top priority of the Rouhani administration. 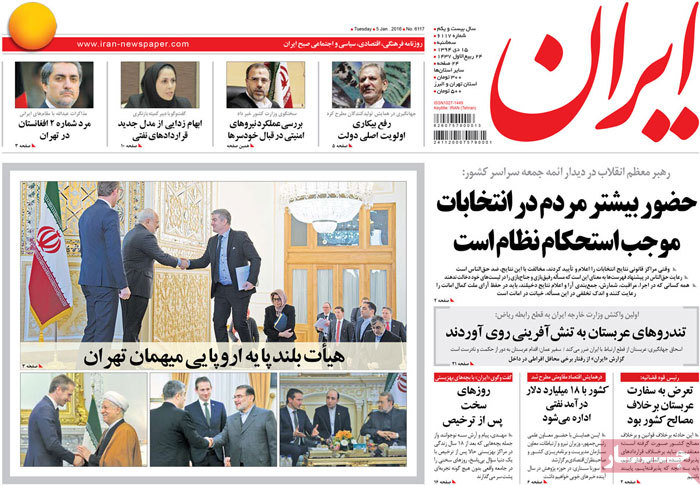 Javan: The first vice-president has labeled unemployment as the country’s biggest problem. 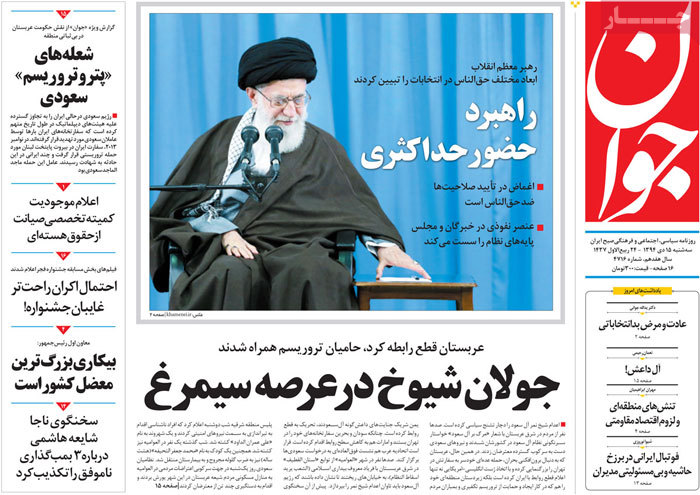 Jomhouri Islami: Iran at the heart of international diplomacy

The Danish foreign minister and the Afghan chief executive officer are in Tehran for talks with Iranian officials.

Iran and Denmark have signed a banking cooperation document.

Jomhouri Islami: The international community has urged Iran to practice restraint in the face of destructive measures by the Saudi government. 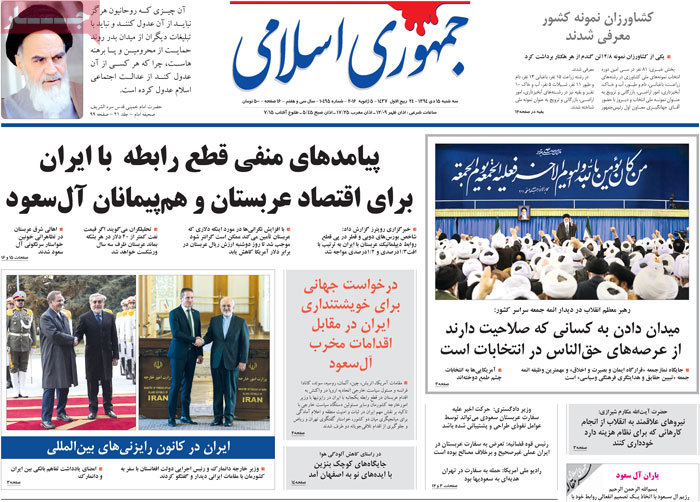 Kayhan: Fraud accounts for most cases of cybercrime in Iran, said a senior law enforcement official. 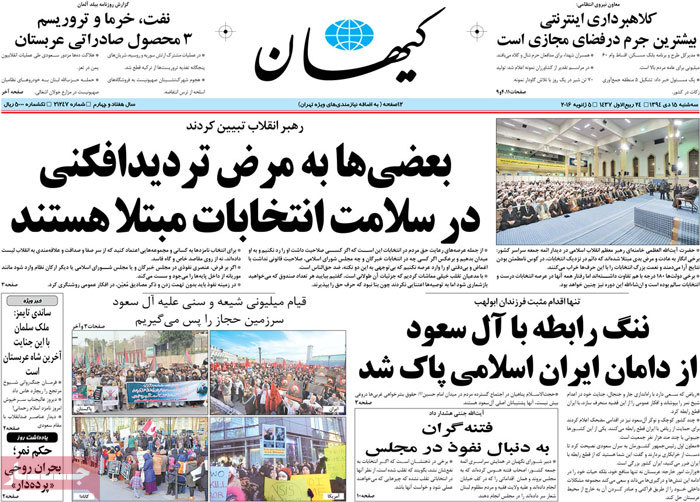 Mardomsalari: The attack against the Saudi Embassy is likely to have been designed by infiltrators, said the justice minister.

Qods: The final hurdles standing in the way of Iran-Europe cooperation will be removed in the coming days, said Foreign Minister Mohammad Javad Zarif.

Resalat: Those who led the attack on the Saudi Embassy in Tehran have been arrested, said a police spokesman.

Resalat: Tehran MP Ahmad Tavakoli has called for the public release of an air pollution report sent to the heads of the three branches of government.

Roozan: Ayatollah Hashemi Rafsanjani has called on Saudi Arabia and its coalition allies to return to the negotiating table. 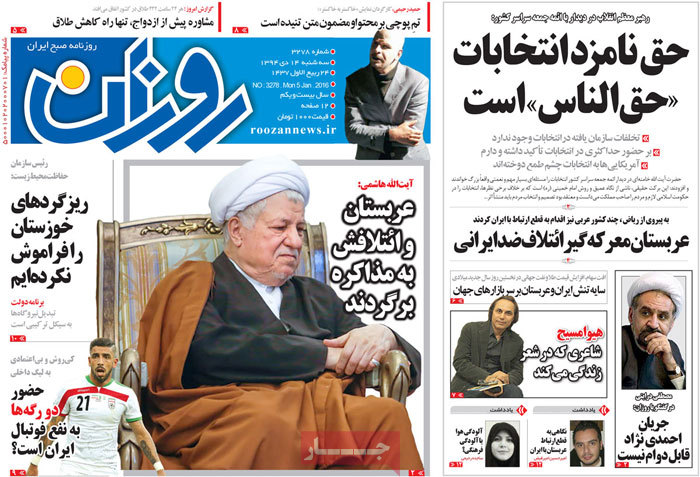 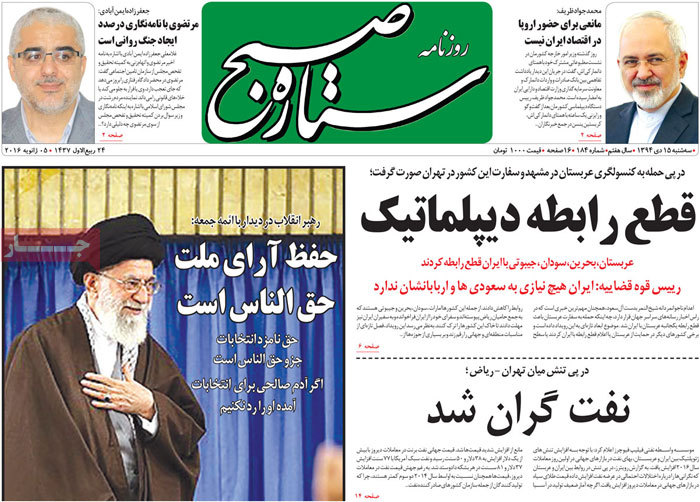 Shahrvand: The Supreme Leader has urged those in charge of vetting hopefuls to qualify those who meet the requirements to run for office.

Ayatollah Khamenei further said that he has always underlined and still underlines maximum turnout for elections. 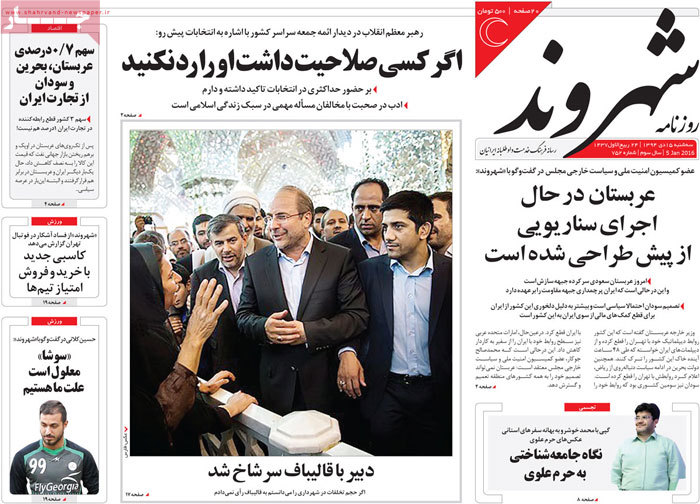 Taadol: The shaky future of OPEC after two heavyweight members cut their ties

A report by the daily takes a look at the future of oil markets after Saudi Arabia cut its ties with Iran.