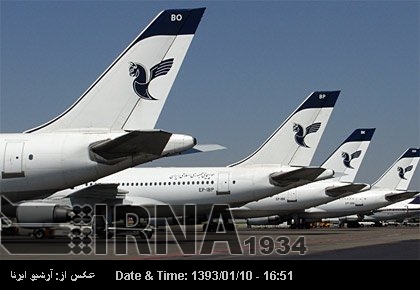 Tehran, Jan 3, IRNA – Iranian officials said on Sunday that the country needs about 600 planes within the next 10 years, raising earlier estimates by around 150.

“In order for the materialization of the targets set in 2026 Perspective Plan, Iran will need at least 581 planes,” said Maqsood Samani, the secretary of the Association of Iranian Airlines. This number of planes, Samani said, will be necessary to answer the passenger needs given that the demand for air travels as well as the transportation of cargoes by planes will surge in the near future.

The official further added that the share of air cargo transportation in Iran currently stands at below 0.2 percent, suggesting that a significant increase in the figure is necessary to boost the country’s economic activities.

Airways News website reported in December 2015 that Iran is expected to order 450 new airplanes over the next five years.
It added that 400 of the new planes will be for mainline services, adding that 150 of them will be used for widebody services. The remaining 50 will be used for regional purposes and will be mostly turboprops.

Airways News added that demand for international flights that would require wide body aircraft will specifically rise.
On a related front, aviation industrialists have been speculating lately that the removal of sanctions against Iran will put pressure on major Middle East carriers, creating new competition for those who have built a business on connecting regional and international traffic.

Leading regional airlines like Emirates, Etihad Airways and Qatar Airways will specifically find themselves in intense rivalry as a result of the opening that will be created in Iran’s aviation market, reported the Gulf News last week.

Analysts agree that Iran will be a growth market in 2016 but with thousands on backorder at the major manufacturers, the Iranian carriers will likely lease aircraft in the near term.

To counter this, the leading regional airlines will have to buy some aircraft and other carriers will have to refurb cabins to retain and attract new passengers, added the report by Gulf News.

Russian major airplane makers have already voiced readiness to satisfy Iran’s needs for planes. However, Mohammad Khodakarami, the deputy director of Iran’s Civil Aviation Organization (CAO) was quoted by the media as saying that domestic airlines are not interested in Russian brands. To the same effect, reports emerged in the media last year that the country has already taken steps to purchase planes from leading Western manufacturers such as Boeing and Airbus. (Press TV)