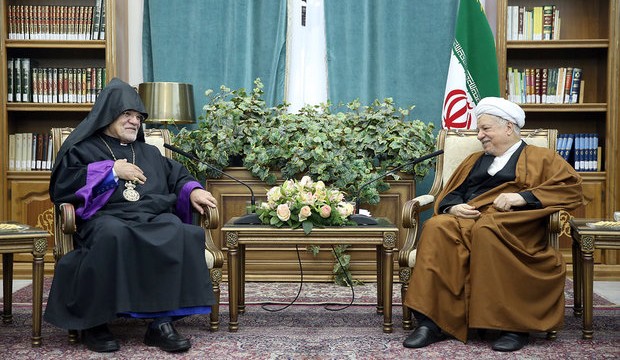 ‘In the years after the Islamic Revolution, Iran has not had any problem with religious minorities, specially the Iranian Christians,’ Rafsanjani said in a meeting with Archbishop of Tehran’s Armenians in Tehran on Thursday.

Rafsanjani voiced his satisfaction in the Iran’s Armenians, and said, ‘Being an Iranian is our commonality with the Christians and we hope our relations to be strengthened.’

In late November, Representative of the Iranian Assyrians at the Parliament Yonatan Betkolia underlined that the religious minorities in Iran enjoy complete freedom.

‘These freedoms are to such an extent that it is not comparable with any of the regional countries; they include freedom in all cultural, educational, social and religious aspects of the religious minorities residing in Iran,’ Betkolia told reporters.

He said the Assyrian community has been living peacefully in Iran for over 3,000 years which shows the peaceful nature of the Iranians.

The Iranian government attaches great importance to ethnic minorities and tribal citizens, Younesi said, addressing a gathering in the Central province of Isfahan.