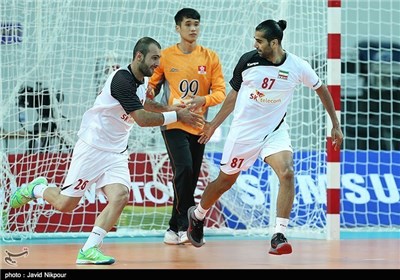 The Christmas Cup was staged in the Polish city of Wroclaw and the Iranian squad attended the event as a warm-up match for the 2016 Asian Men’s Volleyball Championship in Bahrain.

Iranian players had previously conceded a 32-38 defeat at Poland’s tournament against Czech Republic and managed to breeze past Ukraine 25-21.

The Iranian team is currently holding camping in Wroclaw, Poland, and is scheduled to play two other games against Poland and Ukraine.

The Iranian outfit will head to Germany after Poland’s tournament in order to hold a three-day sports training camp.

The 2016 Asian Men’s Handball Championship, which will be the 17th edition of the tournament, will be held in the Bahraini capital, Manama.

Earlier this year, Iran’s national handball team came second failing to win the ticket to the Rio 2016 Summer Olympics after a 28-19 loss against Qatar in the final showdown of the 2015 Asian Qualification Tournament for the Olympic Games which took place in Doha, Qatar on November 14-27.