A look at Iranian newspaper front pages on Dec. 31

IFP has taken a look at the front pages of newspapers on Thursday and picked headlines from 15 of them. IFP has simply translated the headlines and does not vouch for their accuracy.

Air pollution in megacities and the decision of the Cabinet to take urgent measures to ease it dominated the front pages of Iranian newspapers on Thursday. Principlist dailies gave front-page coverage to the comments of the principlist coalition spokesman Haddad Adel, while reformist papers put on their covers the comments Akbar Hashemi Rafsanjani has made on the losses the country incurred when the previous government was in office. 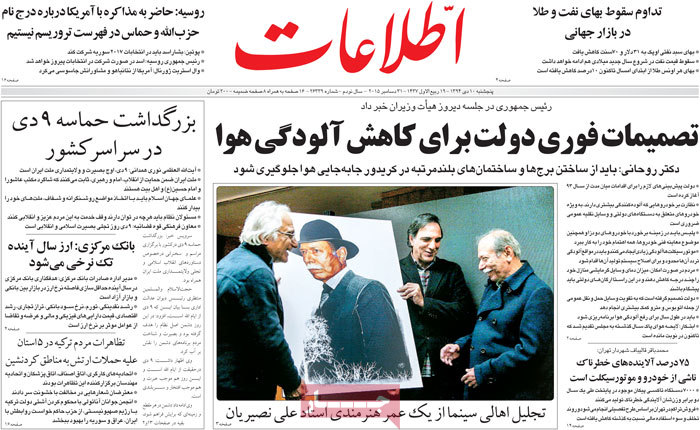 The president said construction of high-rise buildings in air corridors should stop.

Ettela’at: Tehran Mayor Mohammad Bagher Ghalibaf has blamed the gas emissions of cars and motorcycles for 75 percent of all toxic pollutants in the air.

Ettela’at: The lifetime achievements of prominent actor Ali Nasirian have been praised.

The plunge in oil prices is projected to continue in 2016.

Ettela’at: Russia has said it won’t hold talks with the US over the designation of Hezbollah and Hamas as terrorist entities.

The Russian president said Assad should be part of the 2017 elections in Syria.

Ettela’at: Ceremonies have been held to commemorate the epic of December 30, 2009 [when people took to the street across the country to throw their weight behind the Supreme Leader and the establishment; those rallies spelled an end to the unrest that began to rage in the wake of the presidential elections earlier in the year.]

Ettela’at: The Central Bank of Iran has said a single foreign currency rate will be introduced next year [starts March 2016].

Ettela’at: People in five Turkish provinces have staged rallies to protest attacks by the army on Kurdish areas.

Abrar: Some of the individuals seeking to run for the Islamic Consultative Assembly are ex-convicts, said the deputy attorney general for political and security affairs.

Abrar: A number of ministers who served under the previous government [Ahmadinejad’s] are likely to be on the principlist ticket, said Gholamali Haddad Adel, the spokesman of the Principlist Coalition Council. 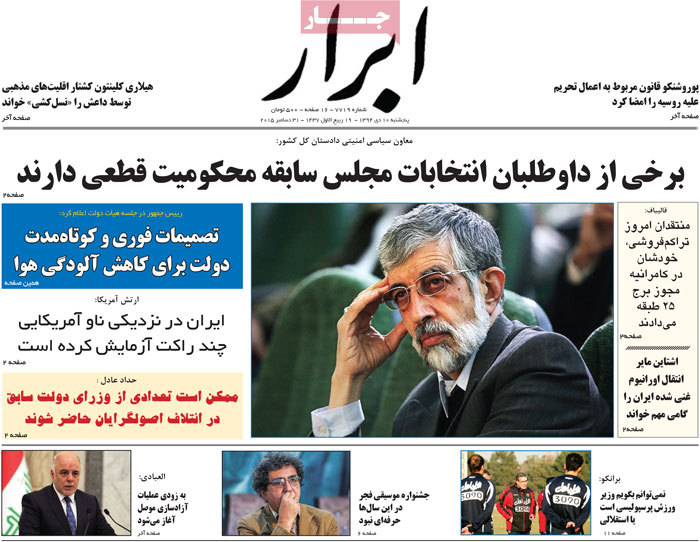 Afarinesh: Parliament Speaker Ali Larijani has said as a result of nuclear talks [which culminated in a deal between Iran and P5+1 in July] sanctions will be removed and economic growth will be expedited. 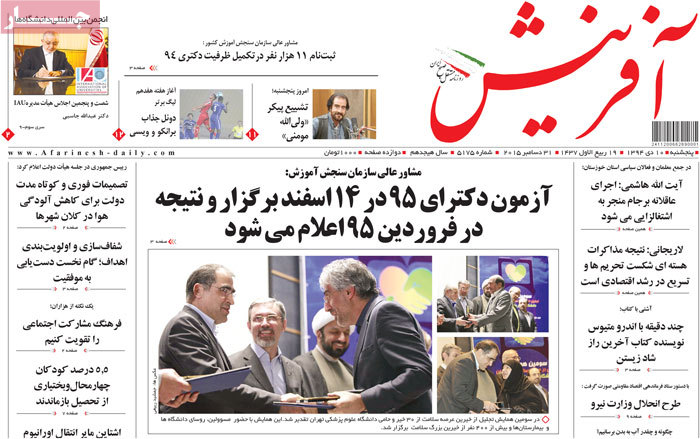 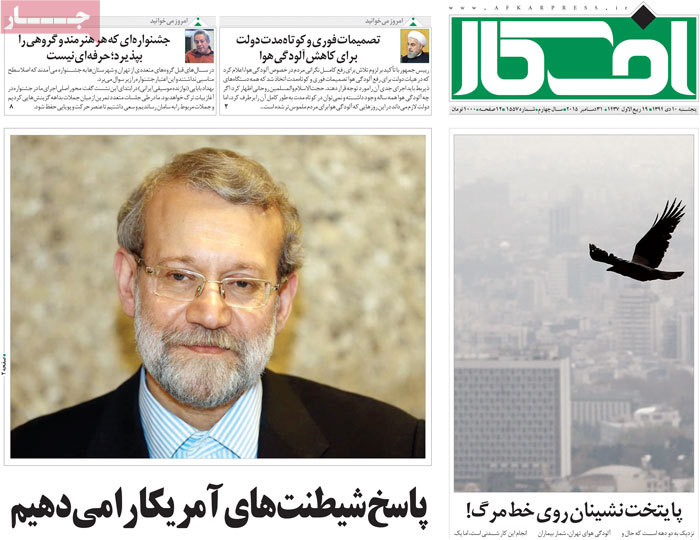 Aftab-e Yazd: Supporters of the sedition [a reference to widespread riots sparked when two presidential candidates doubted the results of the 2009 elections] won’t garner votes even if they are not disqualified, said Ayatollah Ahmad Khatami, a member of the Assembly of Experts.

That is how the spokesman of the Guardian Council has reacted to rumors that Ayatollah Hashemi Rafsanjani is likely to be barred from running for the Assembly of Experts.

Asrar: We won’t welcome the disqualification of candidates,said Haddad Adel, the spokesman of the Principlist Coalition Council.

He further said the damage the country suffered under the previous government was worse than the losses inflicted during the war.

Ebtekar: A spokesman for the Guardian Council has said all candidates [for the Assembly of Experts] except the incumbents will have to take a test on Ijtihad [independent reasoning]. 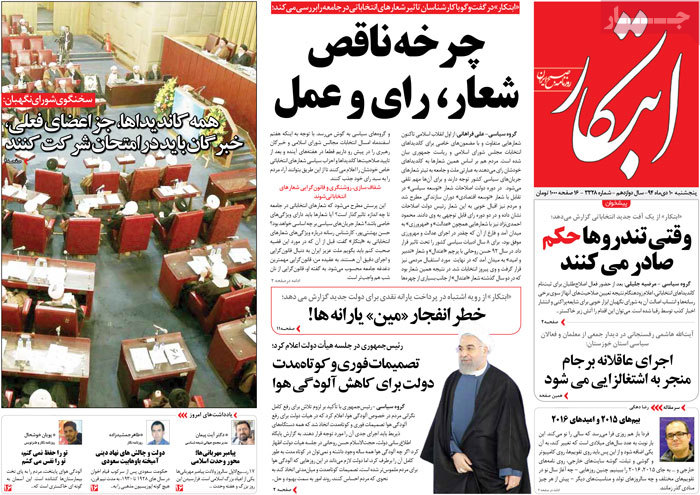 Iran: Minister of Culture and Islamic Guidance Ali Jannati has said upholding the freedom of thought is the main goal of the government. 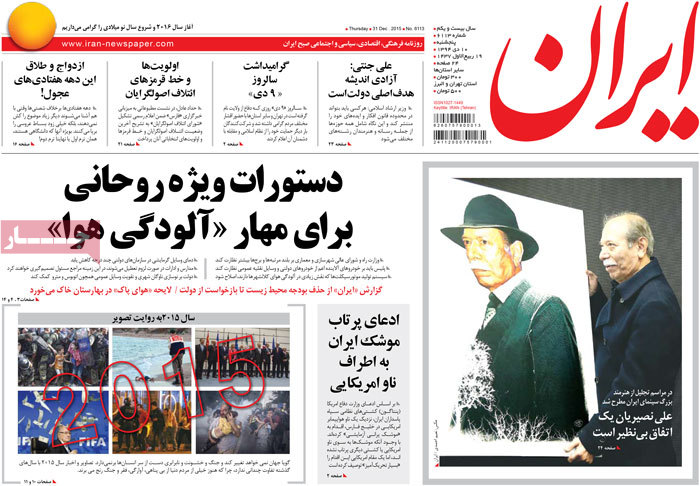 Javan: A parliament whose makeup is influenced by the executive won’t serve the country’s interests, said the spokesman of the principlist coalition.

Haddad Adel further said economy and pocketbook issues will be the top priorities of the 10th parliament. 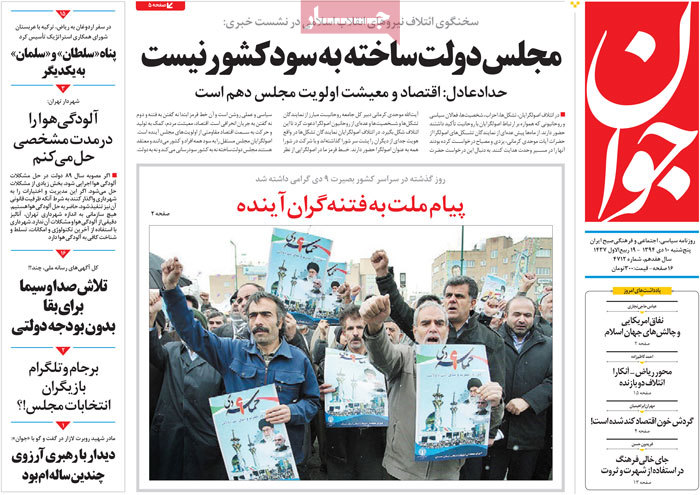 Jomhouri Islami: The country’s trade balance in the first nine months of the year was positive.

Jomhouri Islami: Ayatollah Rafsanjani has said participation of members of the public in the upcoming elections will promote the country’s international credibility as it creates social dynamism. 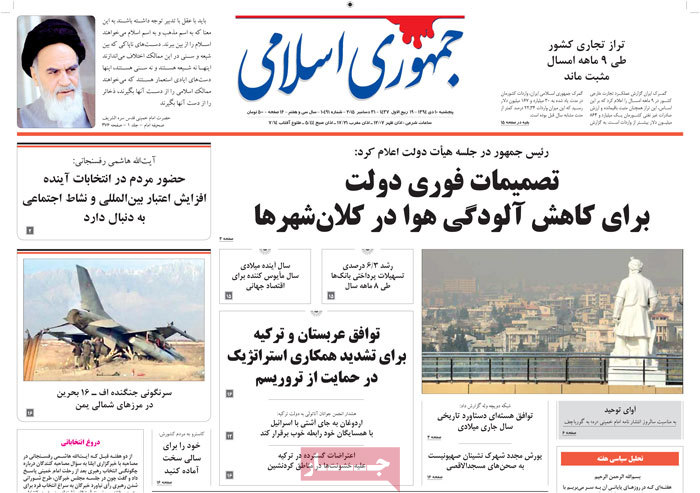 Kayhan: The Syrian army has made advances on three fronts; Riyadh is shedding tears for terrorists.

Resalat: At a time when storage facilities are full of steel, some 2.7 million tons of steel products has been imported from overseas, said Deputy Trade Minister Mehdi Karbasian. 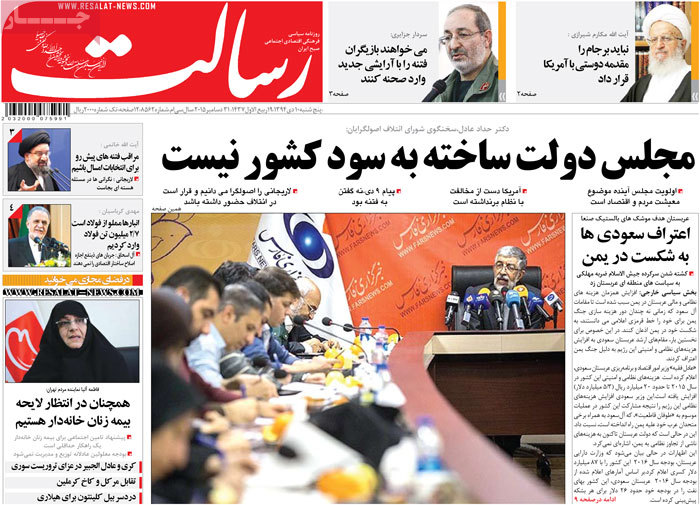 Setareh Sobh: Tehran Mayor Mohammad Bagher Ghalibaf has signaled his readiness to settle the problem of air pollution in the capital.

It came as the president said a clean air bill was presented to parliament [last year].

Setareh Sobh: At a ceremony attended by Foreign Minister Zarif, an electronic passport for Iranian expats has been unveiled.