A look at Iranian newspaper front pages on Dec. 30

IFP has taken a look at the front pages of newspapers on Wednesday and picked headlines from 20 of them. IFP has simply translated the headlines and does not vouch for their accuracy.

The comments of the Supreme Leader at a meeting with officials and foreign guests attending an Islamic Unity Conference dominated the front pages of Iranian newspapers on Wednesday. 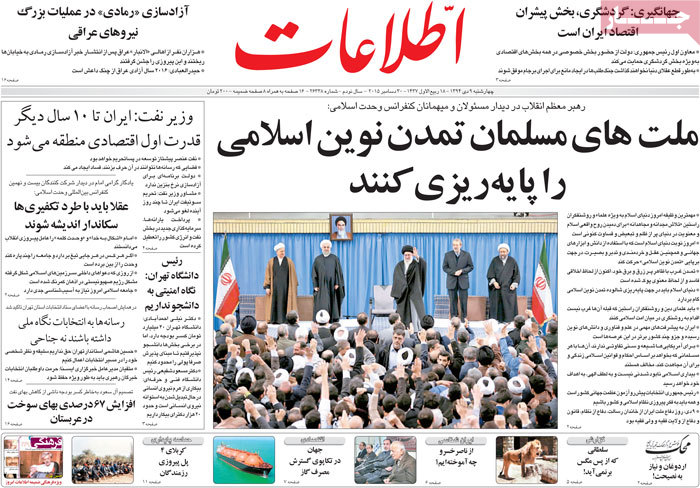 Ettela’at: In a meeting with officials and foreign guests who were in Tehran to take part in an Islamic Unity Conference, the Supreme Leader urged Muslim nations to lay the foundation of a modern Islamic civilization.

Ettela’at: The first vice-president has hailed tourism as a pioneer of Iran’s economy.

Ettela’at: Ramadi has been liberated in a major operation by Iraqi forces.

Prime Minister Haider al-Abadi has said that 2016 will be the year Iraq rids itself of the scourge of Daesh.

Ettela’at: The oil minister has said that Iran will be the regional economic heavyweight in a decade.

Ettela’at: Sagacious individuals should push aside Takfiris to take the helm of schools of thought.

Ettela’at: The president of the University of Tehran has said that there is no security-centered attitude toward students in his university.

Ettela’at: Media should have a national, rather than factional, attitude toward elections.

The comment was made at a meeting between media and Tehran electoral commission officials.

Ettela’at: Fuel prices have risen by 67 percent in Saudi Arabia.

The decision by Saudi authorities to raise fuel prices was meant to offset a budget crunch sparked by the fall in oil prices.

Abrar: The deputy foreign minister has signaled Iran’s readiness to waive visa for citizens of the countries which do the same thing for Iranian nationals. 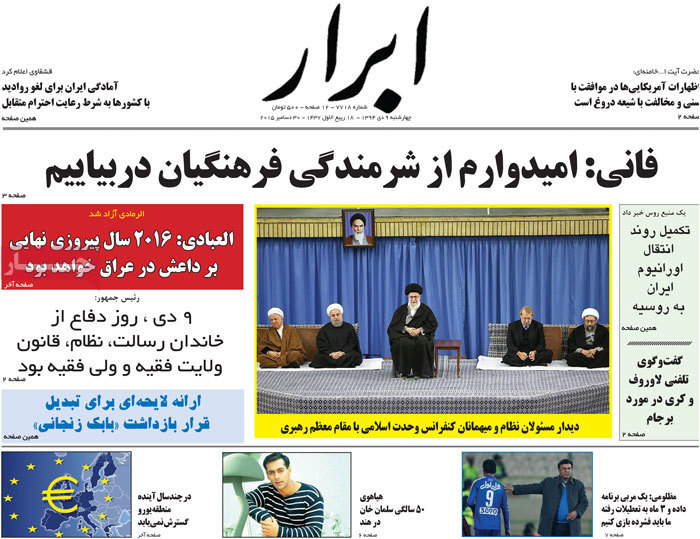 Abrar-e Eghtesadi: The country’s oil revenues are down by $7 billion.

Government won’t be able to carry out with the payment of cash subsidies next year. 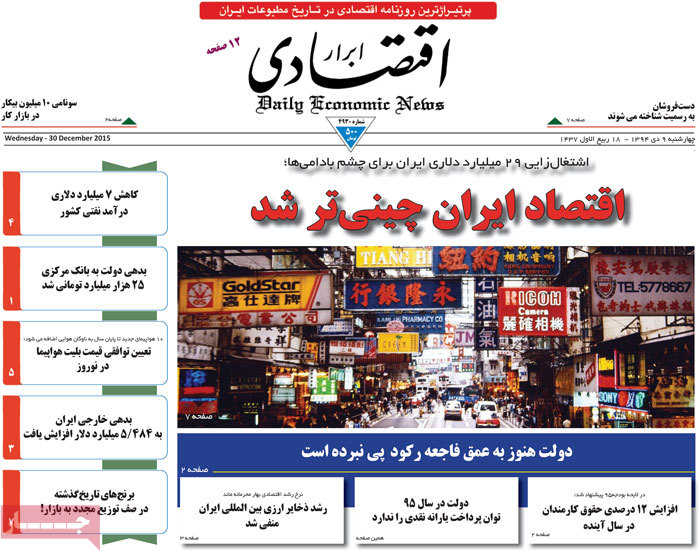 Afkar: Iran will become a member of the Shanghai Cooperation Organization after sanctions have been removed.

Aftab-e Yazd: Rasoul Montajabnia [a reformist leader] has said that reformists have reached out to the president in a bid to have interaction with the Guardian Council. 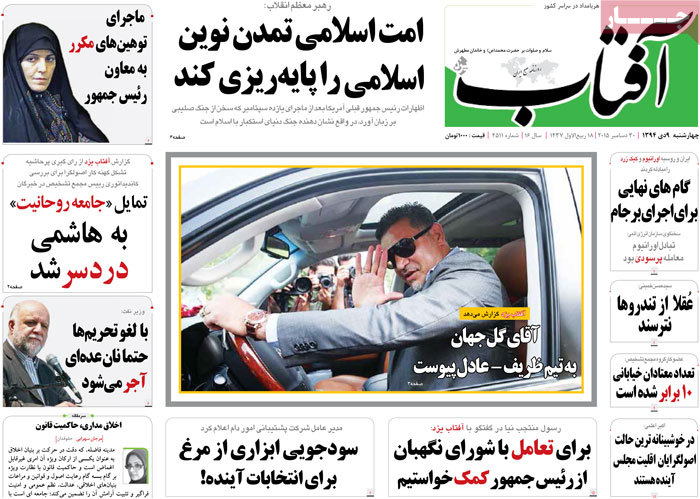 Arman-e Emrooz: In a motion, the lawyer representing Babak Zanjani [who is on trial for massive corruption] has called on the judge presiding over the trial to order his client freed!!

A major step in line with the implementation of the Joint Comprehensive Plan of Action was taken.

Asrar: In a culturally-closed environment growth would be elusive, said the minister of culture and Islamic guidance.

Asrar: Insinuations that there are rifts within the establishment pave the way for infiltration, said Foreign Minister Mohammad Javad Zarif. 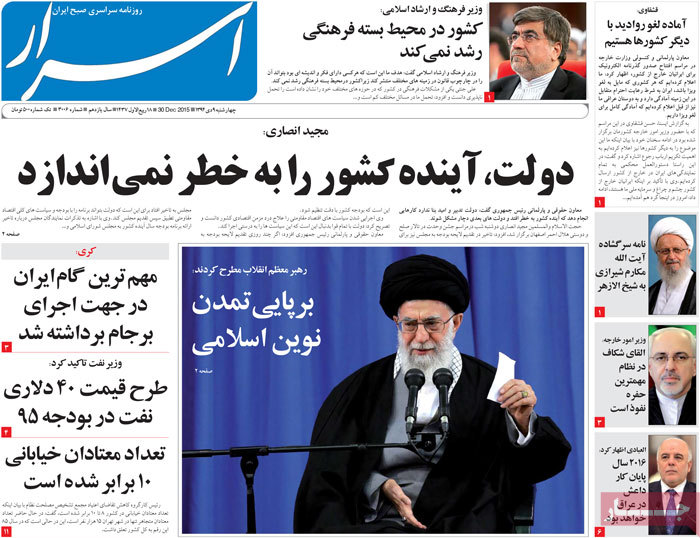 Ebtekar: Options on the table for the Iranian parliament

The daily takes a look at the decisions of Iranians MPs vis-à-vis the anti-Iranian attitude of the American politicians. 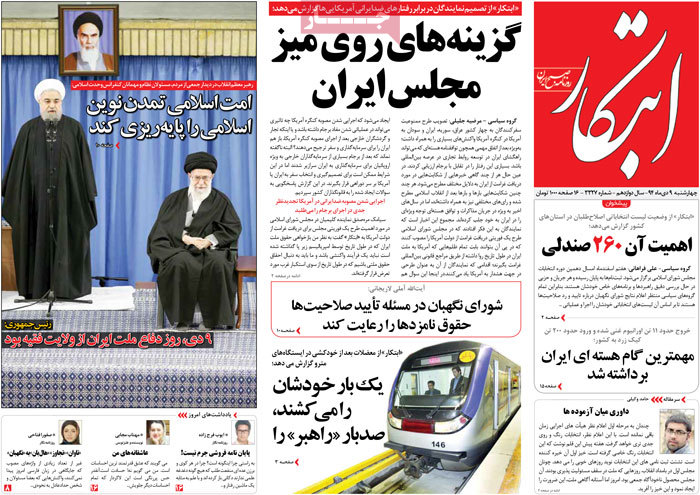 Eghtesad-e Pooya: An Iranian MP has said that 400 individuals owe some $17 billion in arrears to banks. 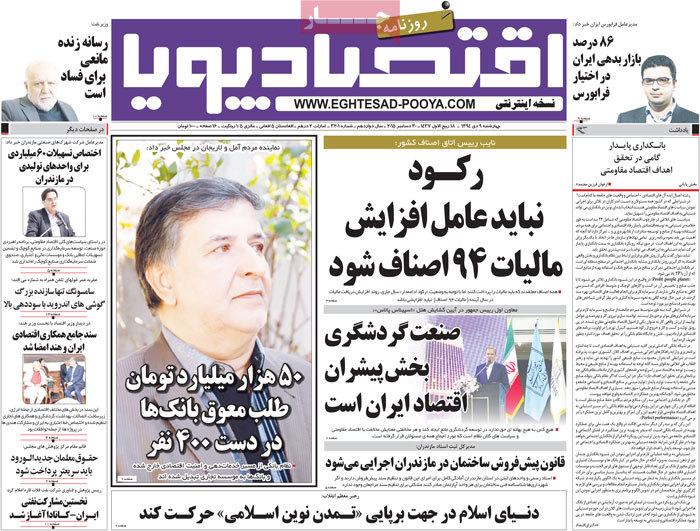 Etemad: In implementing the Joint Comprehensive Plan of Action, we won’t follow the US lead.

A former French prime minister talks about the war on terror and the Iran nuclear deal in an exclusive interview with the daily.

Hemayat: The enemies sought to topple the establishment; what happened on December 30, 2009 [the massive outpouring of support for the leader in nationwide rallies] finished off the sedition, said the Judiciary chief.

Although the Americans say they are not opposed to the nuclear deal, their hostile measures are a violation of the agreement, Ayatollah Sadegh Amoli Larijani said. 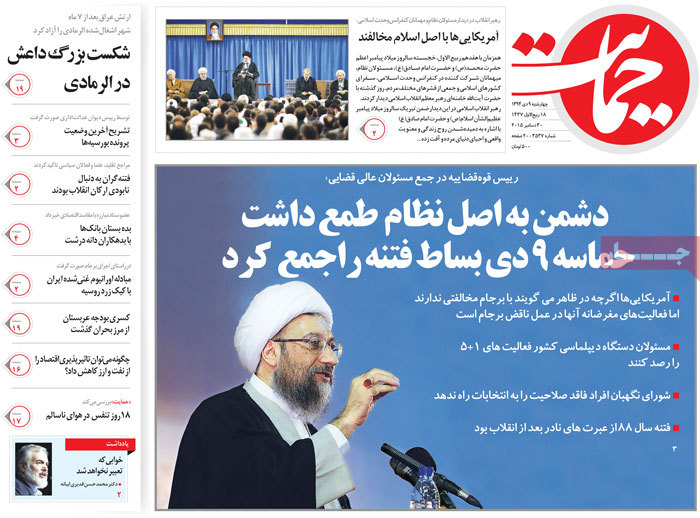 Iran: A hundred-twenty-five modern hotels will be built in Iran.

Iran: The vice-president for parliamentary affairs has said that the competitive electoral atmosphere should not be sullied by mudslinging. 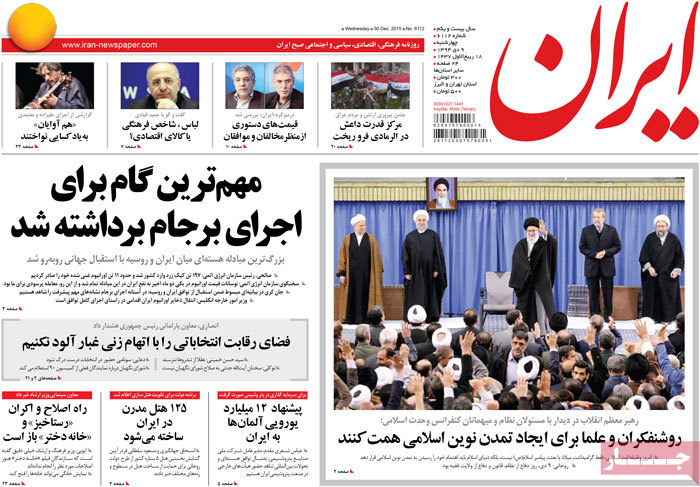 Javan: The secretary of the Supreme National Security Council has said that the recent measure the US has taken [a reference to changes to the Visa Waiver Program] amounts to breach of the nuclear deal. 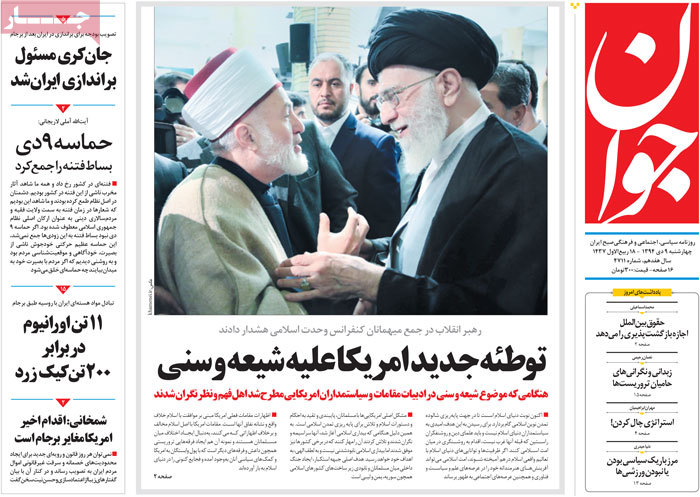 Jomhouri Islami: The director of the Atomic Energy Organization of Iran has said that the fuel swap between Iran and Russia has been completed.

Jomhouri Islami: Ten of the aircraft Iran has purchased will arrive in Iran by the end of the year [March 21, 2016]. 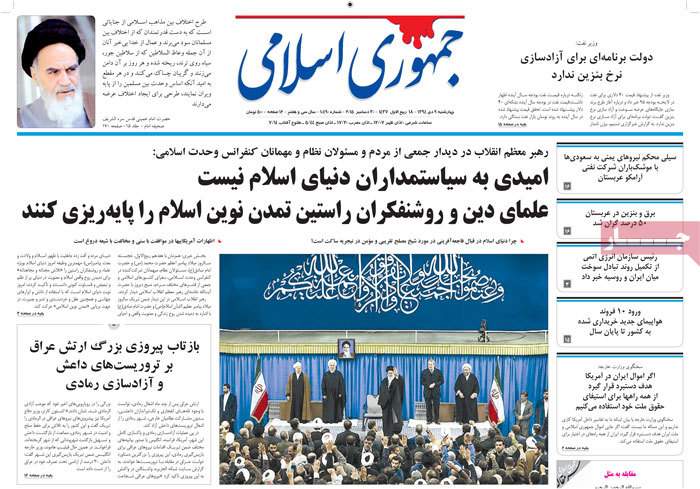 Kayhan: Despite US failure to keep its end of the bargain under the nuclear deal, 11 tons of enriched uranium was shipped out of the country. 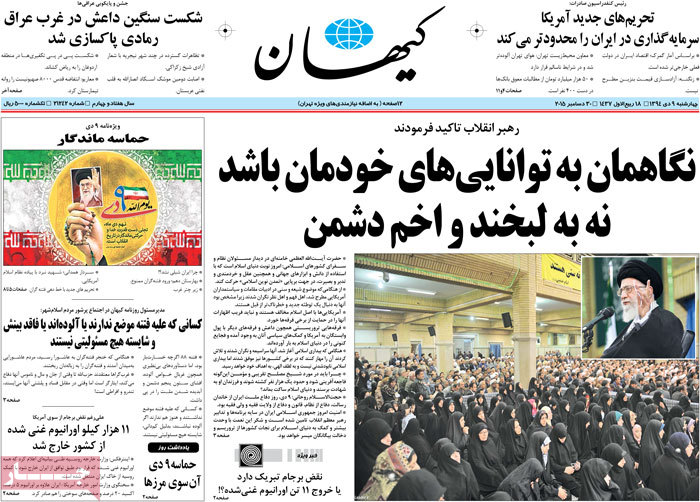 Resalat: December 30, 2009 was the day Iranians threw their weight behind the rule of law and rule of religious jurisprudent, said President Rouhani. 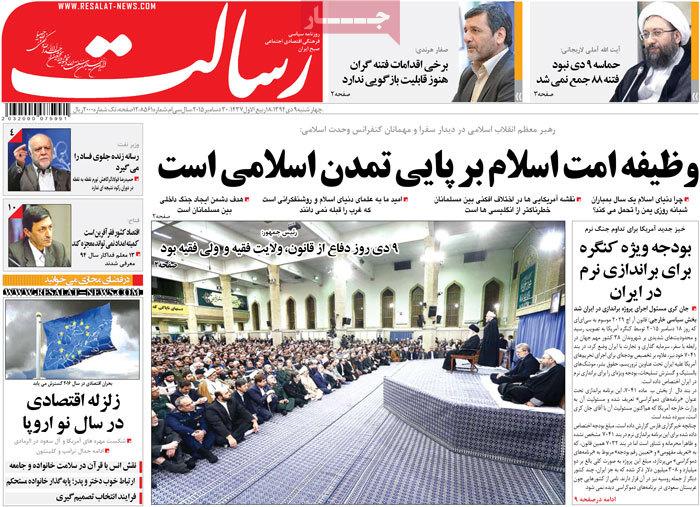 Roozan: The ministers of the Ahmadinejad administration are trying to enter parliament to tarnish the image of President Rouhani. 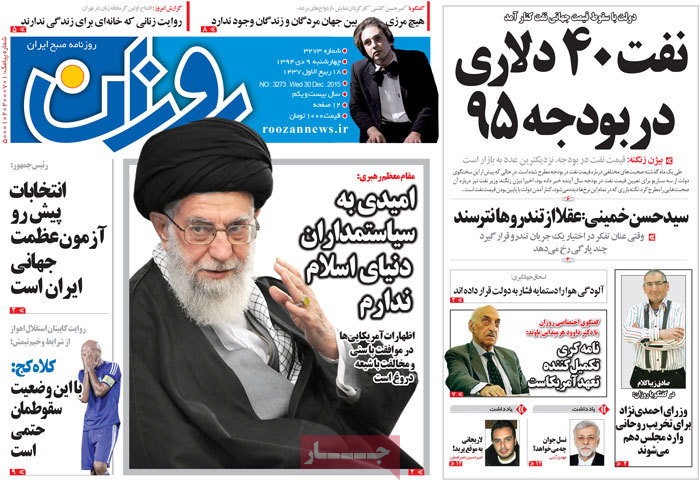 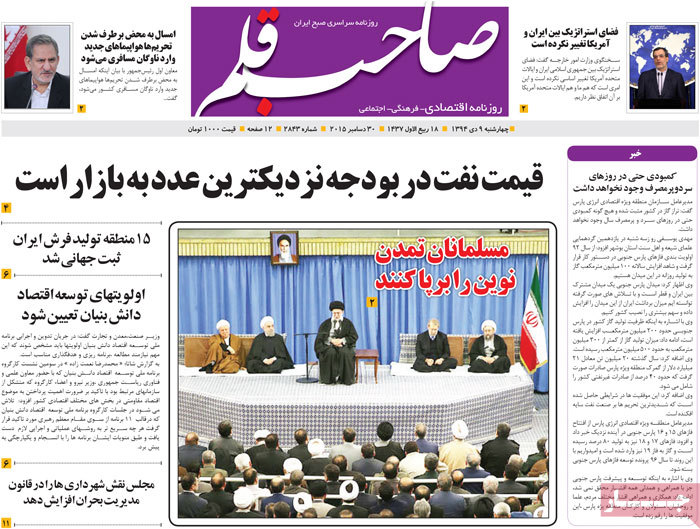 Tejarat: The government-proposed spending package calls for a 12 percent increase in the salary of civil servants next year.

Tejarat: With the termination of sanctions some will see their income shrink, said Oil Minister Bijan Namdar Zanganeh. 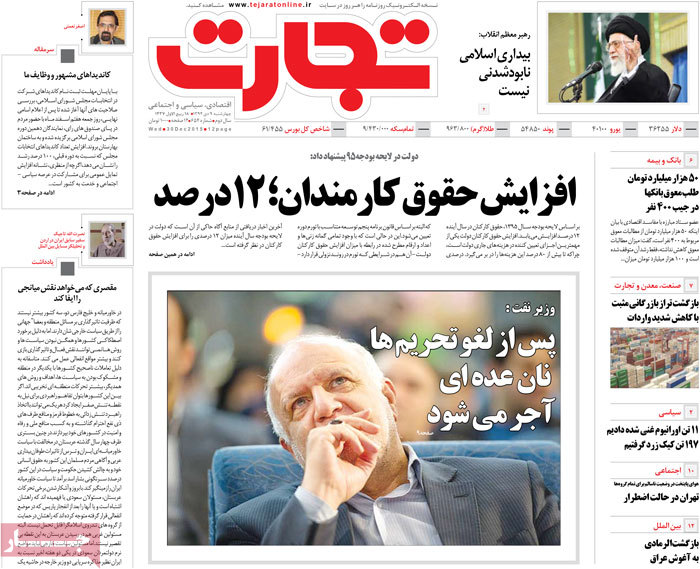 Vaghaye-e Etefaghiyeh: The editorial of the daily penned by the former Foreign Ministry Spokesman Hamid Reza Asefi hails the nuclear deal as a result of the country’s successful diplomacy. 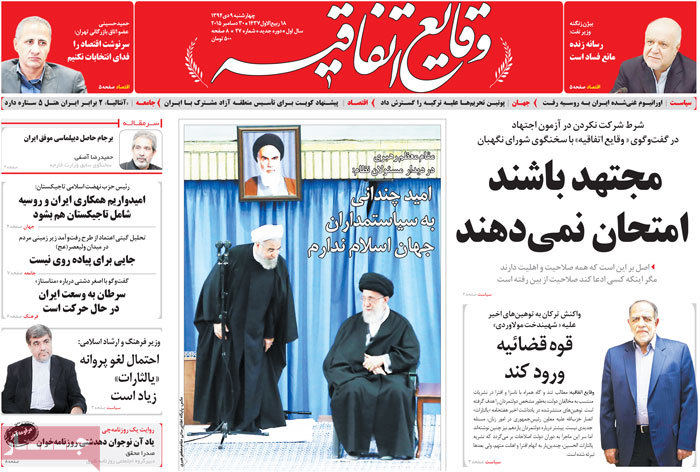