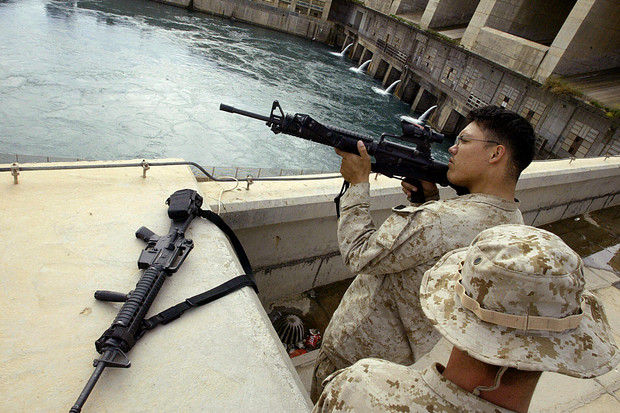 Alwaght- Colonel Steven Warren, the spokesman for the so-called international anti-terror coalition, has said last Monday that Baghdad agreed with the US to deploy 200 military forces to be stationed in Iraq to help fight against the ISIS terrorist group. These claims, which have not been yet confirmed or denied by the Iraqi government, are running counter to Iraq’s prevailing policy which insists that it disagrees with sending any foreign forces to the country. The Alwaght website has held a discussion with three political and military Iraqi experts to shed light on Warren’s comments.

Concerning the issue, Brigadier General Zia al-Wakil, an expert of Iraq’s national security, has said that “despite the fact that Steven Warren has announced Iraq’s agreement with deploying US troops, the Iraqi government has not made any comments on the case and no official statement has been released yet if the Iraqi government has agreed with the move or not. The Iraqi government’s position is clear. It has repeatedly asserted that Iraq did not need any foreign forces on the ground rather it needed only intelligence and logistic support to battle ISIS. There are American military advisers who are providing consultations to the Iraqi army and are training the tribal forces in Iraq’s west in Al Habbaniya air base as well as Al Baghdadi military base. Additionally, there are 6 warplanes stationed to protect these forces. What additional 200 troops can do while there are already 3,000 American military advisers in Iraq.”

And concerning the withdrawal of the Turkish forces from northern Iraq, al-Wakil asserted that “Turkey has not pulled out its forces form Iraq so far, and the last statement released from Ankara noted that Turkey would pull out only 10 military vehicles while about 35 armored vehicles have entered Zilkan military camp in Bashiga village [north of the country], and in case Turkey is forced to move its forces out of Iraq, it would not be a positive response to the US request but it is because of the outcry of the Iraqi people who rejected the Turkish aggression. The Turkish incursion has disrespected the good neighborhood relations and it was not at Iraq’s request, and following the event, the Baghdad’s government resorted to the United Nations Security Council (UNSC) to press Turkey to move its military forces out of Iraq. In addition, the Iraqi army, the resistant Public Mobilization Forces and the tribal forces are adequate to resist against and defeat the Takfiri and terrorist ideology brought along by ISIS.”

Also discussing the same case, Dr. Osama al-Saeedi, the professor of political science faculty in Iraq’s Bain Al Nahrain University, has noted that “in practice Iraq has signed in 2008 a security pact with the American side. Iraq has gone under UN Chapter VII of the United Nations’ decisions following the fall of Mosul [to ISIS terror organization], therefore such a chapter or international decision has entitled the US to enter Iraq to fight ISIS group. Such a condition makes the Iraqi political will limited and not free to reject or abstain from receiving foreign forces or equipment. This issue has embarrassed the Iraqi side and everybody knows that the Iraqi Prime Minister is under the pressure of public opinion that rejects any foreign troops on the Iraqi ground. And although the American forces which are set to arrive in Iraq are backup and advisement forces and not combat troops, agreeing with deployment of such forces would signify that Iraq does not own the full domination over its sovereignty.”

Touching on the reasons behind Washington’s refusal to help Iraq in its fight against ISIS at the onset of terrorist group’s incursion and its failure to fulfill its commitments made in the security agreement with Baghdad and the country’s insistence, at the time being, to deploy forces to Iraq under the excuse of the security agreement, al-Saeedi has said that “the US had its own calculations to protract ISIS’ stay in Iraq as long as possible to make further political and security gains not only in Iraq but also in the whole region. In terms of Iraq’s internal affairs, Washington has succeeded in changing the game after the Iraqi parliamentary elections, removing Nouri al-Maliki, the former Prime Minister, and even bypassing the State of Law Coalition.”

“On the regional and international levels, the US has managed to pass international resolutions, bringing not only Iraq but also Syria under UN Chapter VII terms”, added al-Saeedi.

“After ISIS’ emergence the American military corporations have begun to produce arms with their largest capacity and the arms contracts and deals started to be brokered with Saudi Arabia and Qatar after emergence of the ISIS group. Thereby, these interests push the US to preserve ISIS terrorist group for the longest possible time to arrange arms deals worth billions of dollars with the Arab states. But, on the opposite side, the surprise Russian military intervention in Syria against ISIS has reshuffled the US’ cards and plans to take advantage of ISIS’ stay in the region. Therefore, Washington is now convinced that following the Russian intervention, the ISIS’ life has been drawn close to an end. Consequently, we can observe the countries like Saudi Arabia, which had a hand in creation of ISIS group, have begun to call for the terror group to be terminated.”

And regarding the ploy of the incursion of the Turkish military forces into the Iraqi soil, al-Saeedi has noted that “because Ankara was under Russia’s pressures and threats as a result of shooting down the Russian bomber, it decided to deploy its forces into Iraq to divert the attention from the Russian warplane’s incident and to ease the Russian pressures building on it.”

Also commenting on what Seven Warren has said about US intention to dispatch 200 troops to Iraq, the Iraqi writer and political analyst Manaf Jalal has told Alwaght that “less than a week ago we met with Iraq’s prime minister and specifically discussed the case. The talk was that these American forces would perform special missions and there is US pressure, which are observable in the US leaders’ remarks and the demands made by the American officials, asking for return of the American forces to Iraq. And after Joe Biden’s silence about his plan which asked for partitioning Iraq, now we have begun to see a return of the same US pressures on Iraq, however, this time with a fresh scenario. The new US project suggests that providing security and liberating the Iraqi territories from ISIS forces’ hold cannot be performed without the US boots on the Iraqi ground. So, these matters obviously prove a genuine American desire for returning US forces to Iraq whether through the front door or the back door. Exploiting a set of different tricks including the so-called Islamic Coalition, the US is struggling to enter Iraq through Turkish forces to build pressures on the Iraqi government to make it yield to the deployment of the American ground forces to Iraq afresh.”

“The US wants to show that Iraq is unable to protect its internal security and its sovereignty unless through the presence of American ground forces on the Iraqi soil which are granted full legal impunity. But these American demands face public rejection as well as rejection from the Iraqi political components”, Jalal continued.

Manaf Jalal has noted that “deployment of the Russian forces to Syria has changed Washington’s equations, as it used to claim that it was impossible to destroy ISIS group in a short time and that the win over the ISIS would take a long time.” Meanwhile, we should not disregard the huge gains made by our armed forces along with the Public Mobilization Forces which managed to invalidate the international coalition and the US administration’s theory which deemed that the battle against the ISIS’ fighters may needed years of fighting. The international coalition has not presented anything mentionable to Iraq but, on the contrary, it has targeted the Iraqi forces several times instead of striking ISIS’ militants. It has cleared its actions by arguing that they were mistaken strikes or what they are called an unintentional friendly fire”, said Jalal, ending his discussion with Alwaght.