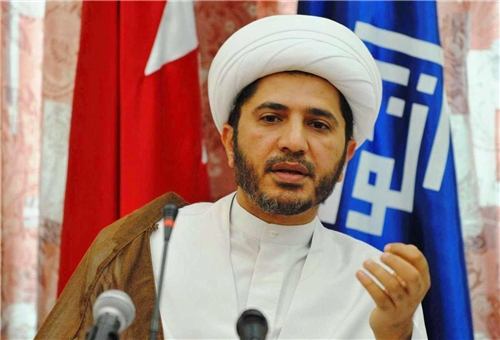 Sheikh Salman vows to continue struggle for democracy in Bahrain

The jailed secretary general of Bahrain’s main opposition bloc has pledged to press ahead with his peaceful campaign for the establishment of democracy in the Persian Gulf country.

“Political and economic developments have proven right and necessary the opposition’s demands for radical reforms in Bahrain,” Sheikh Ali Salman, the secretary general of al-Wefaq, said in a massage published on Twitter on Sunday, the first anniversary of his arrest.

“A year in prison has deepened my belief of an inclusive national rescue project to save Bahrain from this awful political and economic situation,” he added.
“A genuine political solution and response to public demands are inevitable, and any delay in this regard would harm Bahrain a lot,” the prominent Shia Bahraini cleric and opposition leader said.

Salman was detained on December 28, 2014 on charges of attempting to overthrow the ruling Al Khalifa dynasty and collaboration with foreign powers. On June 16, almost seven months after his arrest, he was sentenced to four years in prison. He has strongly denied the charges, emphasizing that he has been seeking reforms in Bahrain through peaceful means.

Anti-regime protesters have been holding demonstrations on the streets of Bahrain since mid-February 2011, calling for the Al Khalifa ruling family to relinquish power. Bahraini regime forces, backed by Saudi troops, have cracked down on the protesters, killing scores of them. A large number of Bahraini activists are also languishing behind bars.

Amnesty International and other rights groups have repeatedly censured the Bahraini regime for its human rights abuses against opposition activists and anti-government protesters.