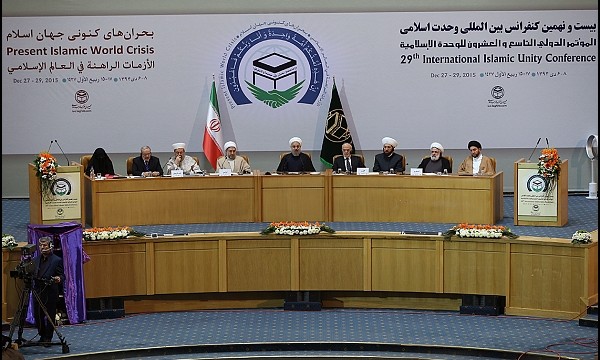 Tehran, December 27, The Iran Project – Continuing the registrations for both Iran’s Assembly of Experts and Parliament across Iran, the ceremony to award Mustafa (PUBH) Prize and holding the 29th International Conference on Islamic Unity in Tehran dominated Iran’s media outlets in the past week (Dec.21-Dec.27).

Rouhani denounces violence in name of Jihad
President Hassan Rouhani said violence, which takes its root from a mentality and is a way of thinking, will be translated into rhetoric and then gradually develop into a discourse soon.

US firms eyeing post-sanctions Iran jobs
More signs are growing that major US enterprises are preparing to set foot in the Iranian market as soon as the sanctions against the country are lifted.

Inflation rate falls to 12.6%
The Statistical Center of Iran has announced that the inflation rate for the 12-month period ended in the last day of the ninth Iranian calendar month of Azar (December 21) compared to the same period in the previous year hit 12.6 percent.

Iran, Russia ‘will benefit’ if Tehran joins Eurasian economic union
Tehran is almost sure to benefit if it joins the Eurasian Economic Union, which will, in particular, add to the development of Tehran’s ties with Moscow, according to prominent Iranian political expert Mahmoud Shoori.

US court mulls appropriation of Iran assets
The US Supreme Court is mulling a case on appropriating $2 billion of Iranian assets frozen in a bank in New York.

Iranian MPs seek defense budget hike
The national security and foreign policy commission of Iran’s parliament is going to hold a meeting with the ministers of defense and foreign affairs to push for an increase in the country’s defense budget, a lawmaker announced.

Iran, Oman kick off joint naval drills in Persian Gulf
The Iranian and Omani naval forces started joint exercises in the Eastern parts of the Strait of Hormuz and the Persian Gulf on Wednesday morning.

Iran to launch oceangoing ship soon
Iran plans to officially launch its oceangoing research ship in the near future, an official announced.

A sports-centered interview which stirred a national political controversy
A barrage of criticism has been unleashed against IRIB for not broadcasting FM Zarif’s interview, with people and officials unanimously calling for the national broadcaster’s impartiality.

Health minister: Iran future will astonish world
Unity and solidarity between the Iranian people will help build ‘an Iran’ that will make the world surprised, Minister of Health Hassan Hashemi said.

Renovating Azadi Stadium to encourage private sector
The fundamental renovation of the biggest national Azadi stadium in Iran will encourage the beneficial presence of the private sector in developing sports.

Yemeni forces kill Saudi prince in Ma’rib province: Report
Yemeni army forces, backed by allied Popular Committees loyal to the Houthi Ansarullah movement, have killed a Saudi prince during an attack in the oil-rich province of Ma’rib in central Yemen, a report says.

Erdogan refuses to cooperate with Anti-Daesh Intelligence HQ
Turkey’s government refused the invitation to join the center set up in Bhdad to exchange intelligence on terrorists that pose a threat to the region, the Turkish president said in an interview on Saturday.