A look at Iranian newspaper front pages on Dec. 27

IFP has taken a look at the front pages of newspapers on Sunday and picked headlines from 19 of them. IFP has simply translated the headlines and does not vouch for their accuracy.

News about high levels of air pollution in the capital dominated the front pages of Iranian newspapers on Sunday. News stories about who has fielded their candidacy and who has not for the upcoming elections also appeared on the cover of dailies.

Ettela’at: The Environment Protection Organization has said the fact that Tehran is home to more residents than it can accommodate is the main culprit in air pollution in the capital.

A deputy director of the organization said massive property development and growing urbanization of recent years to increase municipal revenues is among the biggest urban management blunders which need to be rectified.

Ettela’at: The Central Bank has said inflation in the 30 days to December 21 stood at 13.7 percent.

The governor of the Central Bank has rejected interest rates of more than 20 percent as unacceptable.

Ettela’at: Pakistan has said it supports the legitimate government of President Assad.

Ettela’at: The president has described education as key to sustainable development.

In a message to a conference held, among other things, to praise the services of Dr. Gholamhossein Shokouhi, President Rouhani said child education is among the most important factors in HR training.

Ettela’at: Some $17,000 in loans for renovation of old buildings.

Ettela’at: A new plan on gasoline sale at the pump will be implemented by yearend.

Abrar Eghtesadi: A senior official at the Russian aerospace and defense company Tupolev has put forth the idea of production – under license – in Iran of Tupolev aircraft! 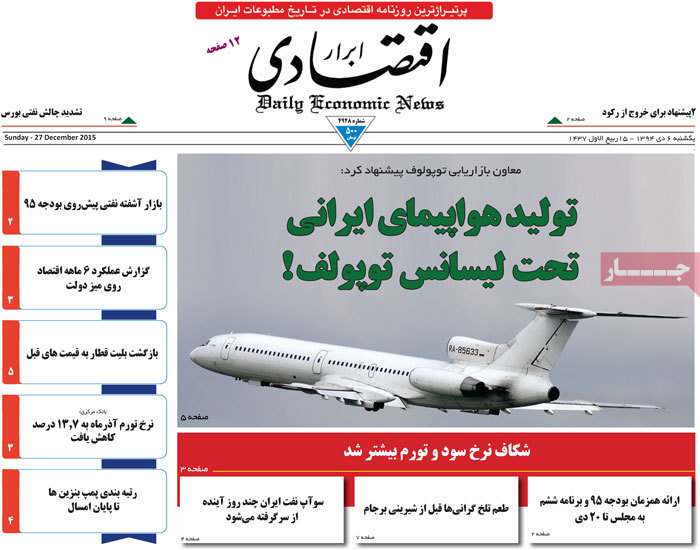 Afkar: Tensions between Russia and Turkey serve no one’s interests, said Ali Akbar Velayati, an advisor to the Supreme Leader. 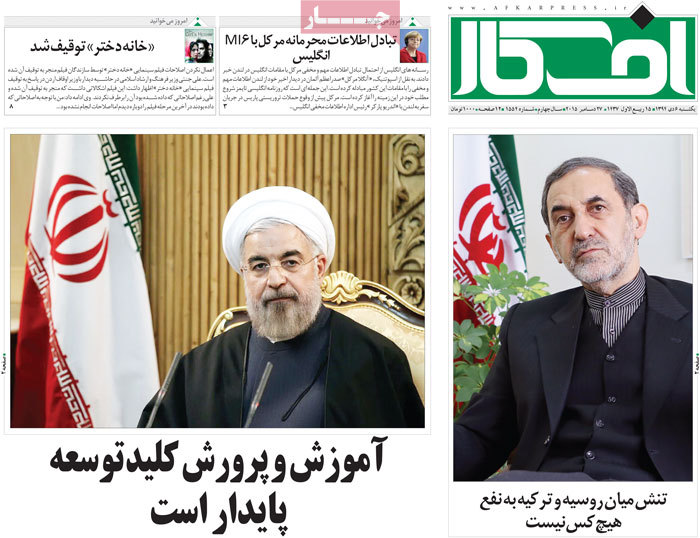 Aftab-e Yazd: Some are trying to set aside the religious jurisprudent through referendum, said Ayatollah Mesbah Yazdi. 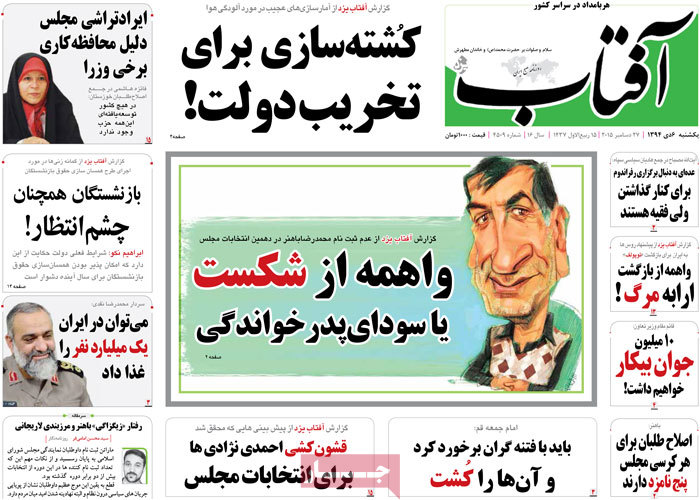 The daily takes a look at why Mohammad Reza Bahonar [a current vice-speaker of the Islamic Consultative Assembly] does not seek reelection in upcoming legislative elections. 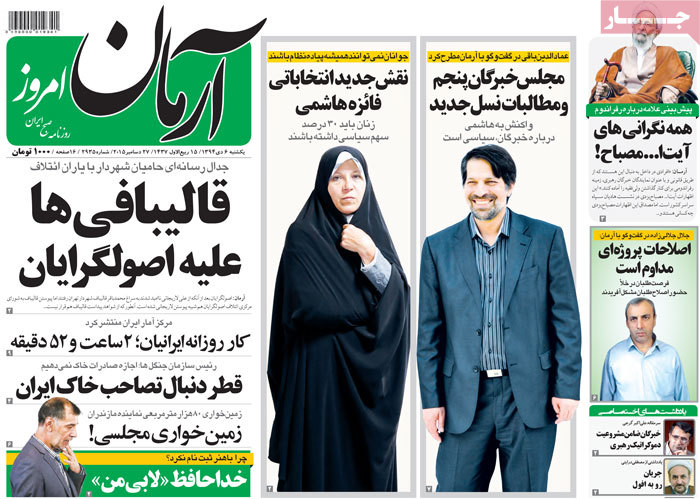 Asrar: The health minister has said that inflation in the healthcare sector is at least 1.5 times more than other areas.

Asrar: The passing of nine incumbents in the fourth assembly and the decision of six other representatives not to seek reelection mean there will be a minimum 17 percent change in the makeup of the Assembly of Experts [following the late February elections]. 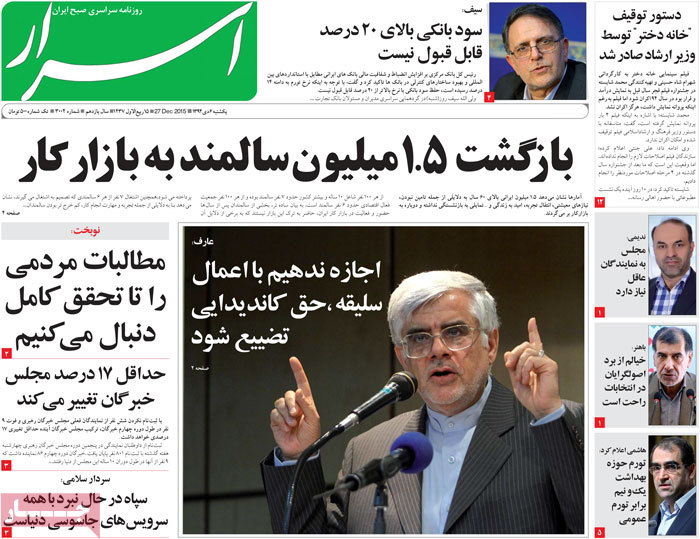 The daily has interviewed a number of experts on why the number of potential candidates for the 10 parliament has posted a dramatic increase.

Etemad: Of the 75 known figures running for the Assembly of Experts, 17 are close to reformists and moderates, 26 are members of the two main clerical societies in the country and 21 are independent. 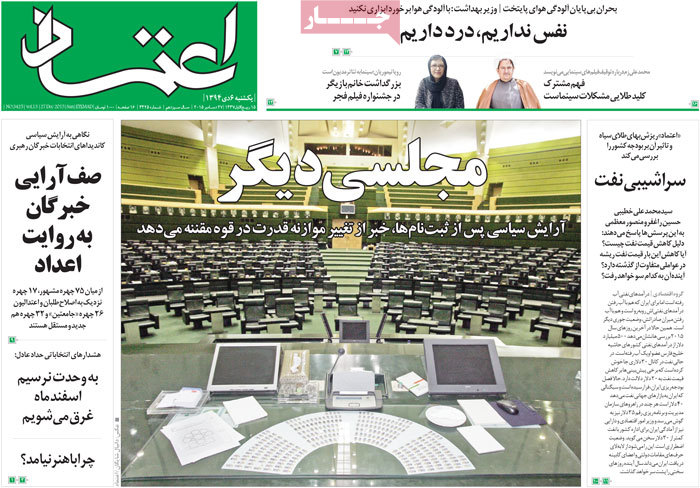 Hemayat: We have the strangleholds of the enemy at our disposal, said the deputy commander of the Islamic Revolution Guard Corps Brigadier General Salami in a gathering on IRGC and national authority and security. 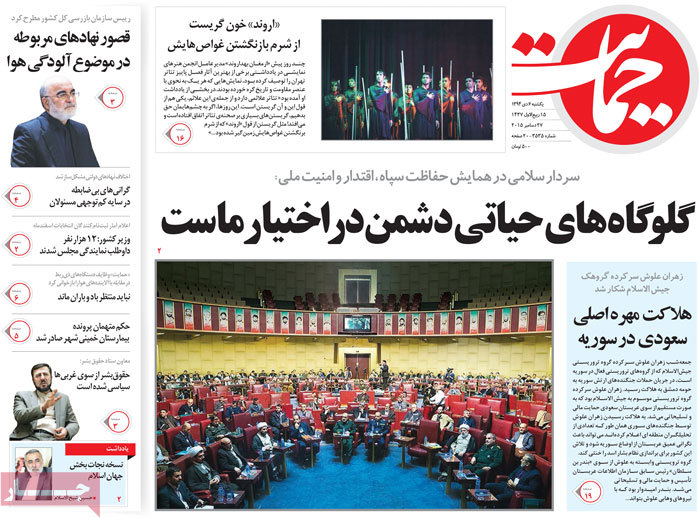 Iran: Four cultural centers in Tehran are playing host to a First International Music Festival of Muhammad, the Prophet of Kindness. 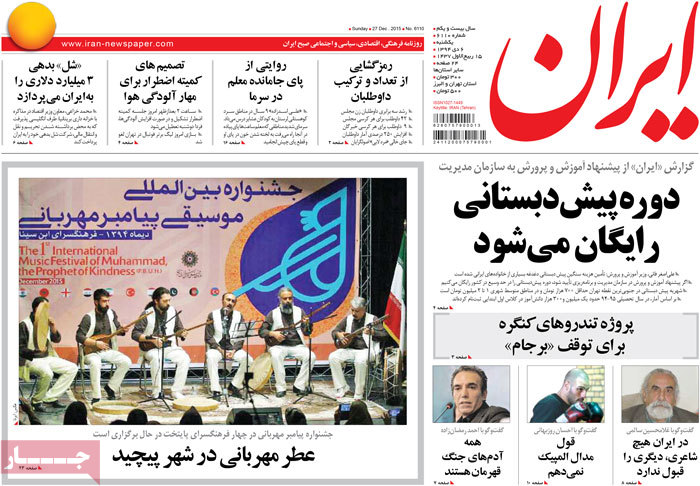 Javan: Mosques are torched in France and the US.

Western leaders react passively to the desecration of Muslims as the world celebrates the birth anniversaries of the Prophet Muhammad and Jesus Christ. 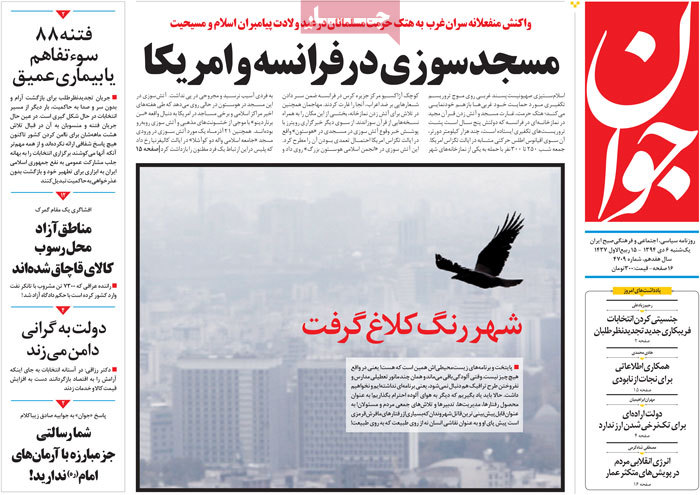 Jomhouri Islami: A 29th international conference on Islamic unity is held in Tehran on Sunday.

More than 600 scholars from across the Muslim world take part in the gathering; President Rouhani delivers a key-note speech. 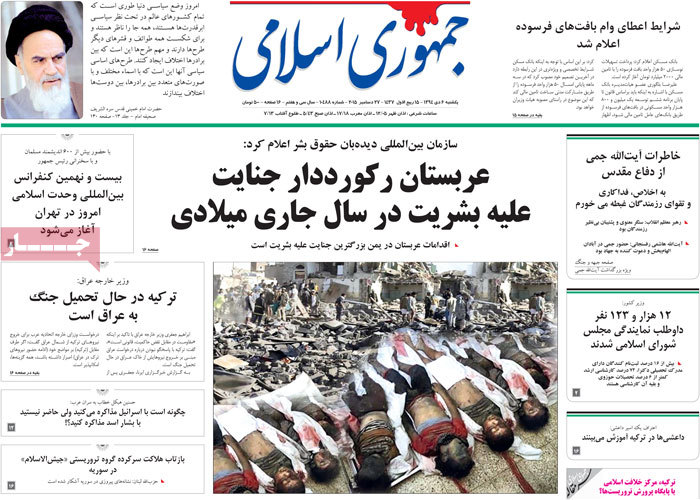 Kayhan: A deputy industry minister has said the president should not rush to signing a deal with Peugeot. 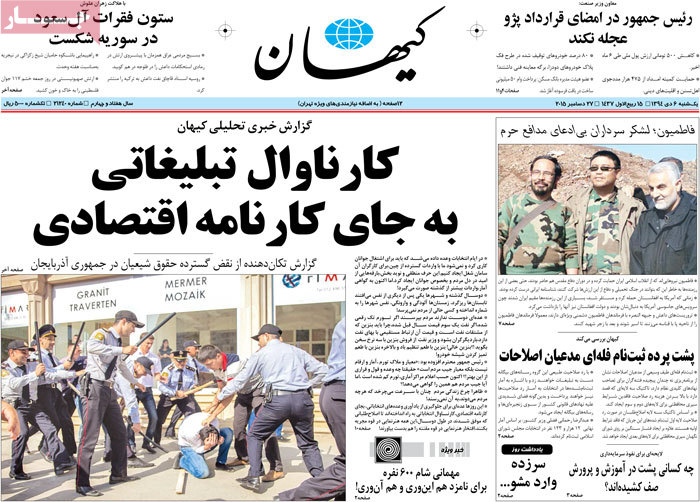 Khorasan: The Supreme Leader has paid visits to the houses of Christian martyrs in a move to mark Christmas. 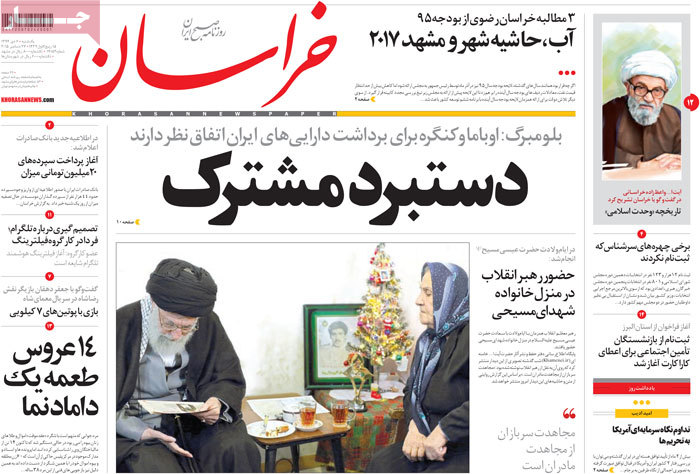 Resalat: Iran is a regional leader when it comes to nanotechnology, biotechnology and ICT, said the vice-president for science and technology. 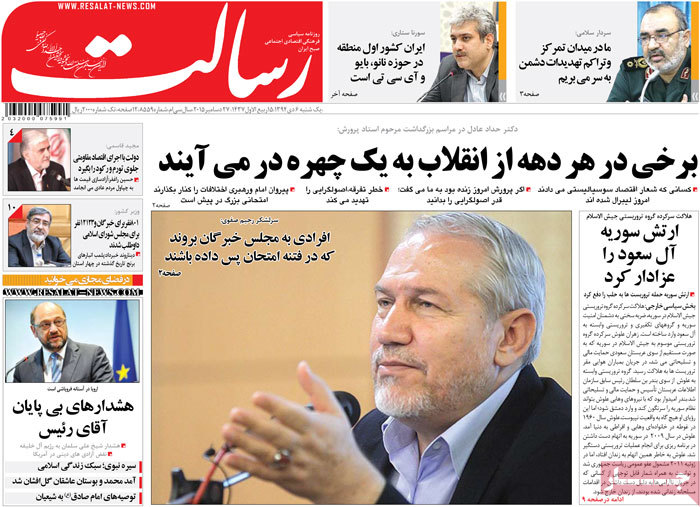 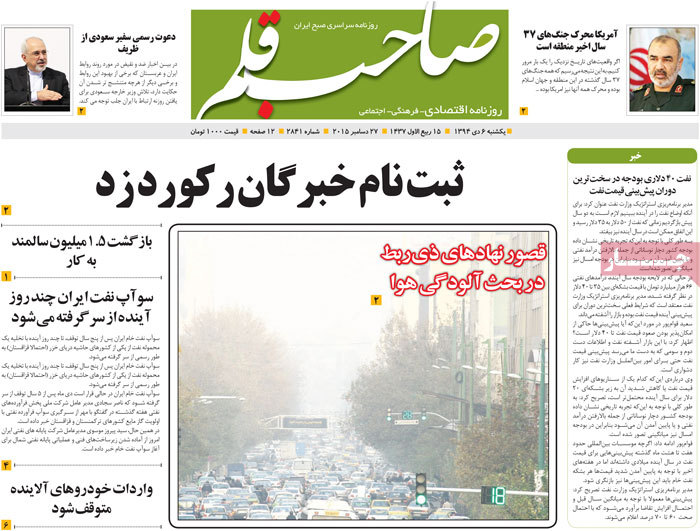 Setareh Sobh: The interior minister has said the number of potential candidates for the Assembly of Experts has registered a 62 percent increase over the previous elections. As for the Islamic Consultative Assembly the figure stands at 100 percent. 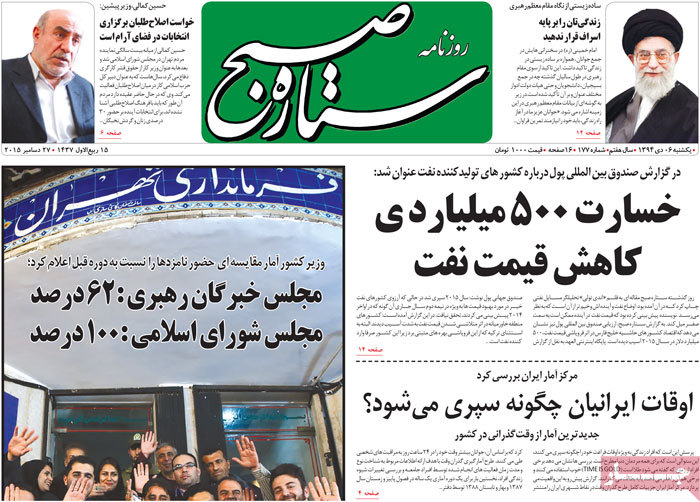 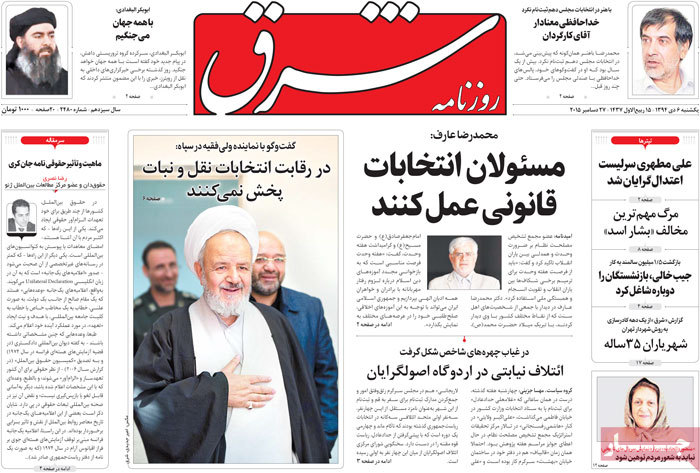 Vaghaye-e Etefaghiyeh: An MP representing the Christian community in Iranian parliament in an opinion piece has called for a world free of violence in 2016. 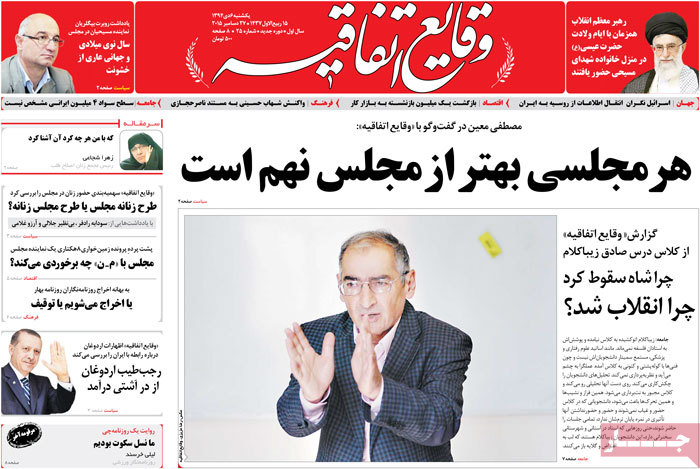