A look at Iranian newspaper front pages on Dec. 26

Registration of around 12,000 people for the late February elections dominated the front pages of Iranian newspapers on Saturday. Also in the news were comments by the interior minister that he is not worried about the growing number of registered candidates and those of the secretary of the Guardian Council who said the number is dubious. 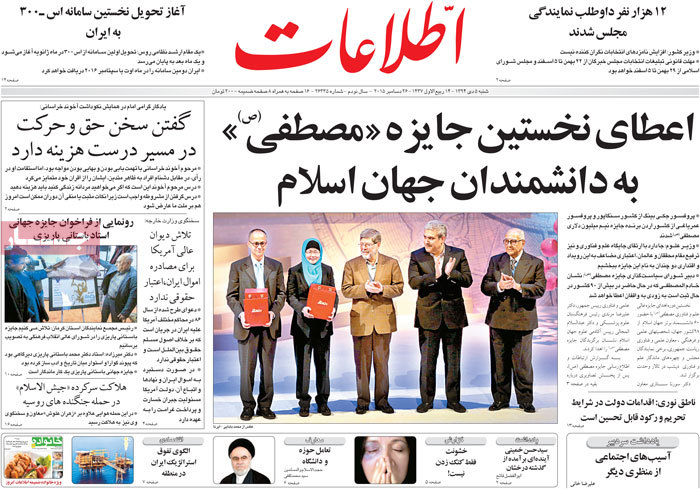 Ettela’at: Afirst Mustafa Prize has been granted to the scientists of the world of Islam.

[The $500,000 Mustafa Prize is a top science and technology award granted to the top researchers and scientists of the Organization of Islamic Cooperation (OIC) member states biennially.]

Jackie Y. Ying from Singapore and Professor Omar Yaghi from Jordan are the recipients of the prize in the “Life Sciences and Medicine” and “Nano-science and Nanotechnology” categories.

Ettela’at: As many as 12,000 people have fielded their candidacy for the Islamic Consultative Assembly. The interior minister has said that the growing number of candidates is not alarming.

Ettela’at: The first S300 missile defense system is to be delivered to Iran soon.

A top Russian military official has said that his country starts to deliver the first S300 system to Iran in January.

Ettela’at: To utter the truth and walk down the path of rightfulness involves a price to pay, said the grandson of the late Imam Khomeini in a congress to commemorate Akhund Khorasani.

Seyyed Hassan Khomeini further said that the lesson we can learn from the late Grand Ayatollah Mullah Mohammad Kazim Khorasani is that you need to pay the price if you want to lead an honorable life.

Ettela’at: The Foreign Ministry spokesman has said that attempts by the US Supreme Court to seize Iran’s assets lack legal substance.

“We are trying to make the Bastani Parizi Prize approved in the Supreme Cultural Revolution Council, said the head of the assembly of MPs representing Kerman Province.

Ettela’at: Zahran Alloush, the head of the Jaysh al-Islam [the Army of Islam], has been killed in a Russian airstrike.

Alloush’s deputy and the spokesman of the terrorist group in Syria were also killed in the air attack.

Abrar: “We will abide by the law,” said Mohsen Hashemi after registering for parliamentary elections. 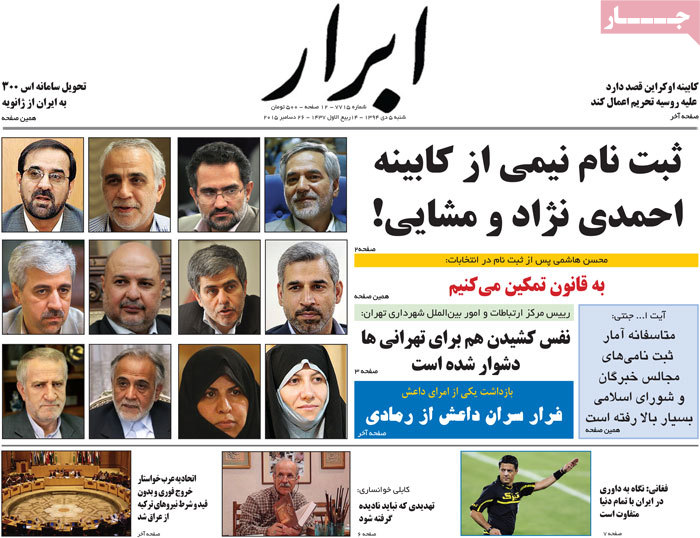 Abrar-e Eghtesadi: Registration of half of Ahmadinejad’s Cabinet and Rahim Mashaee, the former president’s chief of staff [for the upcoming elections]! 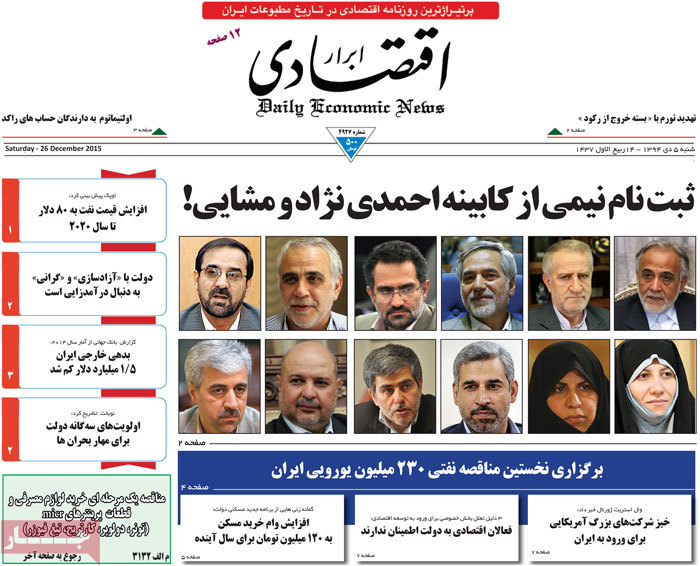 Afkar: The government spokesman has said that unity between the Shiites and Sunnis is praiseworthy in Iran. 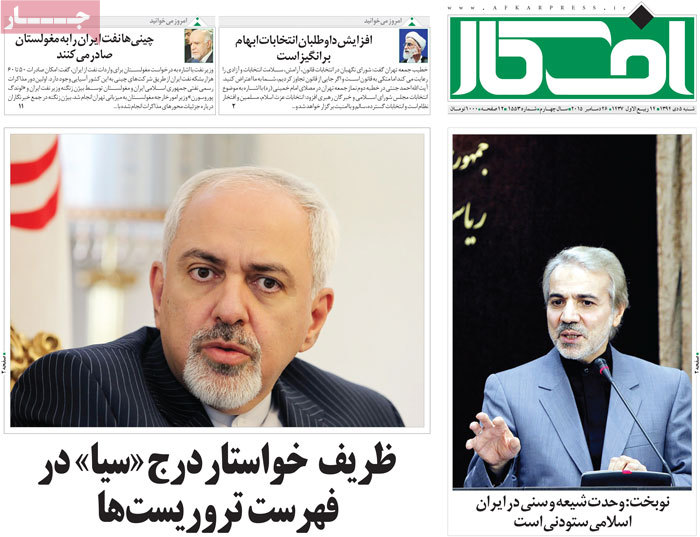 Aftab-e Yazd: To leave it to people’s opinion to decide on the qualifications [of candidates] means that laws make no sense, said Ayatollah Jannati, the secretary of the Guardian Council. 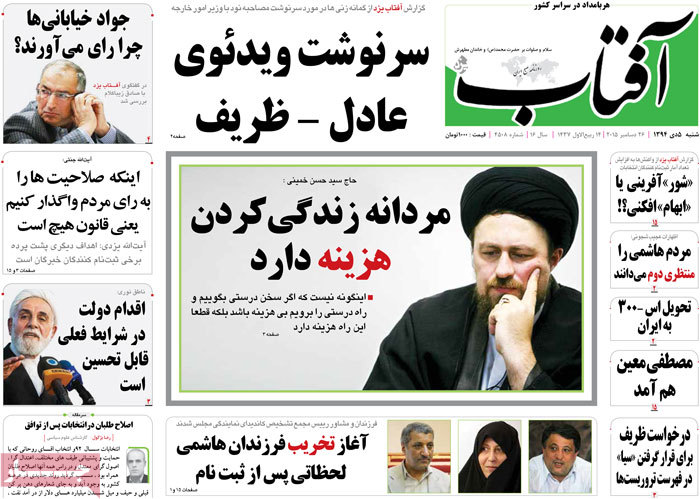 Arman-e Emrooz: Mohsen and Fatemeh Hashemi on their way to Baharestan [the Tehran street along which the Islamic Consultative Assembly is located]

The daily has a report on the children of Ayatollah Akbar Hashemi Rafsanjani who are running for parliament.

“I am not worried about the disqualification of my husband and children,” said Effat Hashemi, the wife of the chairman of the Expediency Council. 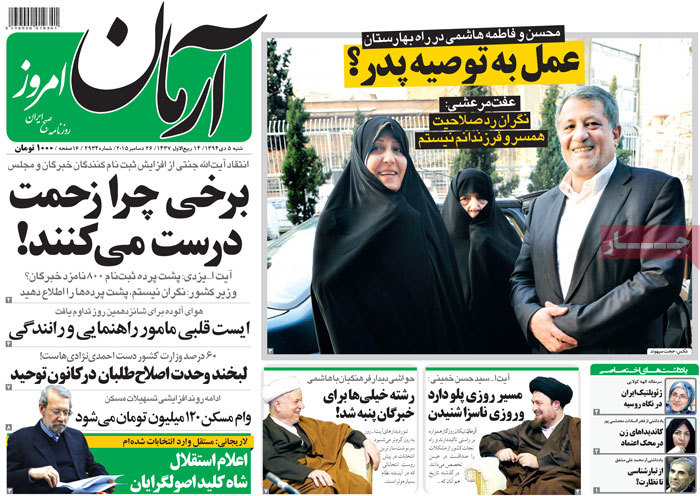 Asr-e Azadi: A national broadcaster or a factional one? 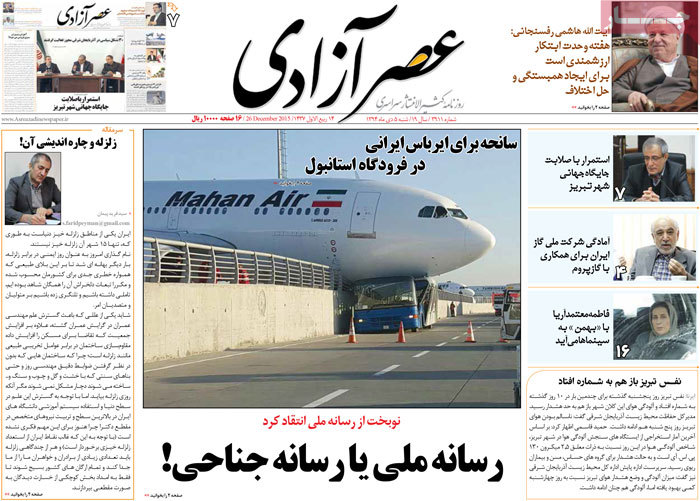 Asrar: Reformists will not come [forward to contest and] lose the elections, said Mohammad Reza Aref, a reformist leader. 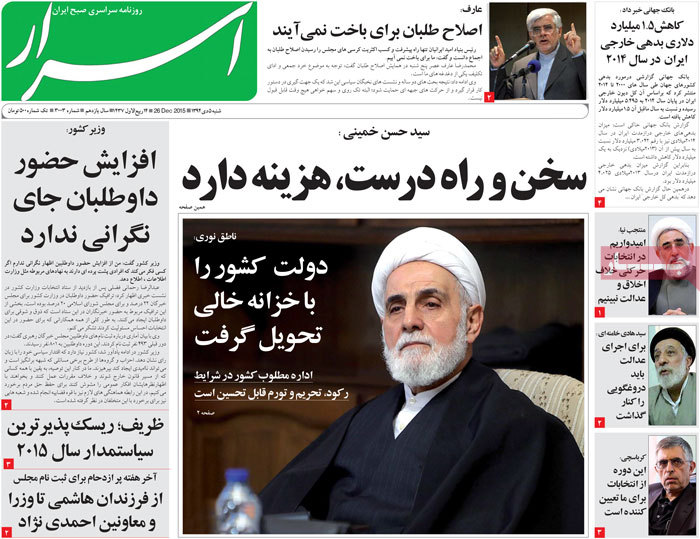 Ebtekar: Untold stories about a meeting between Iranian and Saudi foreign ministers in New York

Foreign Minister Zarif has asked for the CIA to be enlisted as a terror group. 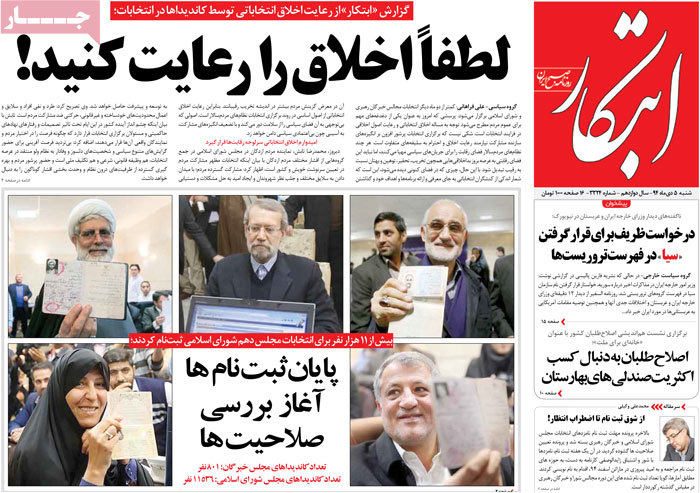 Etemad: “I run in parliamentary elections on an independent ticket,” said Parliament Speaker Ali Larijani who has fielded his candidacy from Qom Constituency. 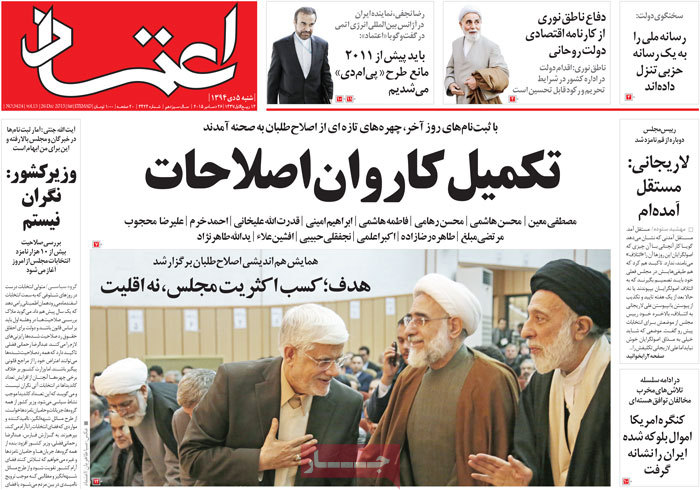 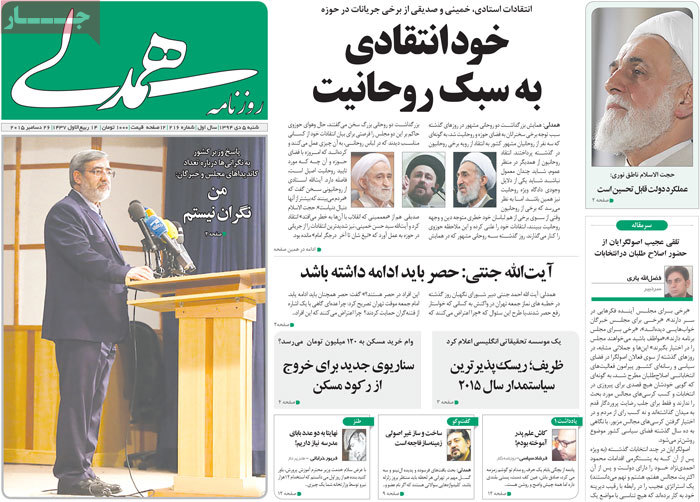 Hemayat: The Foreign Ministry spokesman has slammed efforts by the US Congress to withdraw some $1.75 billion from the account of the Central Bank of Iran, saying that the US has no right to steal Iran’s assets. 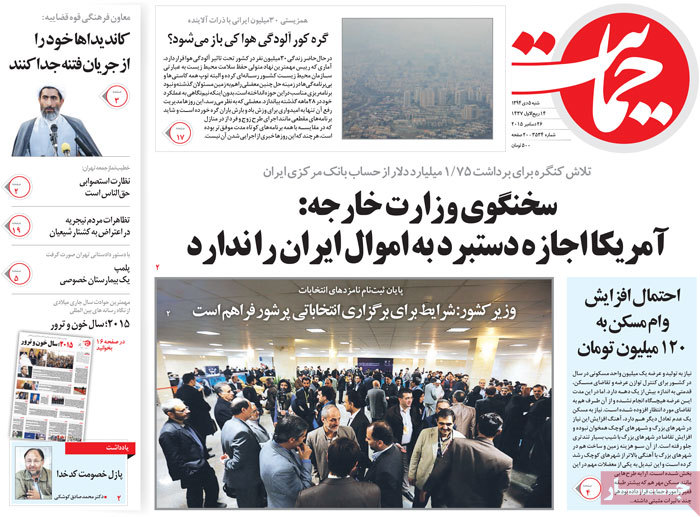 Javan: The secretary of the Guardian Council has said that active oversight is a right people are entitled to. 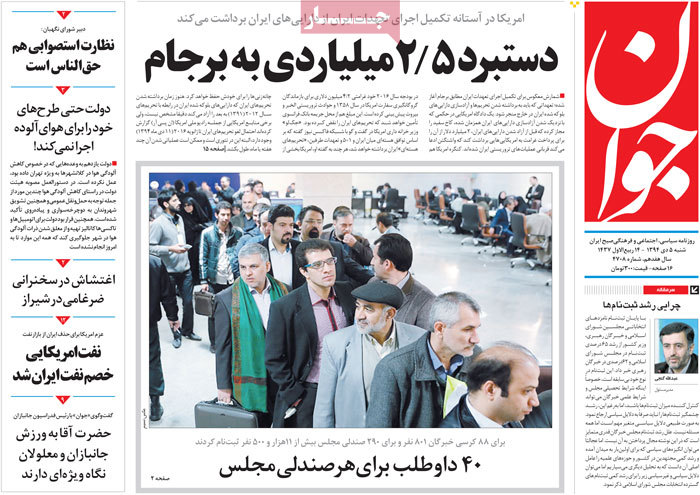 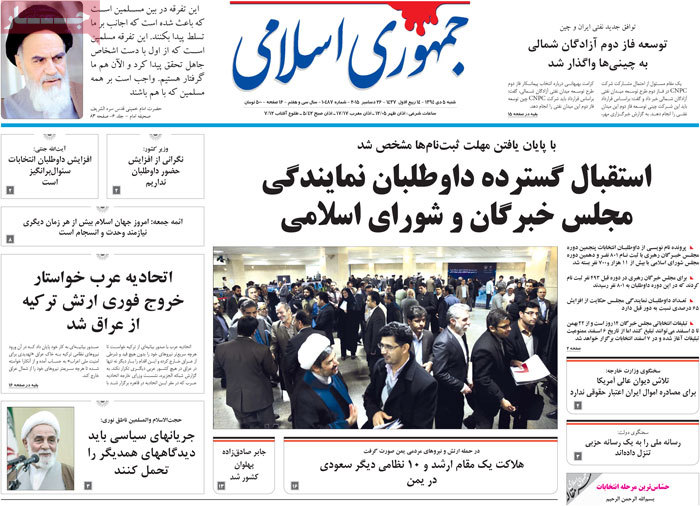 Kayhan: Ten field hospitals have been launched in Sistan and Baluchestan Province to mark Unity Week. 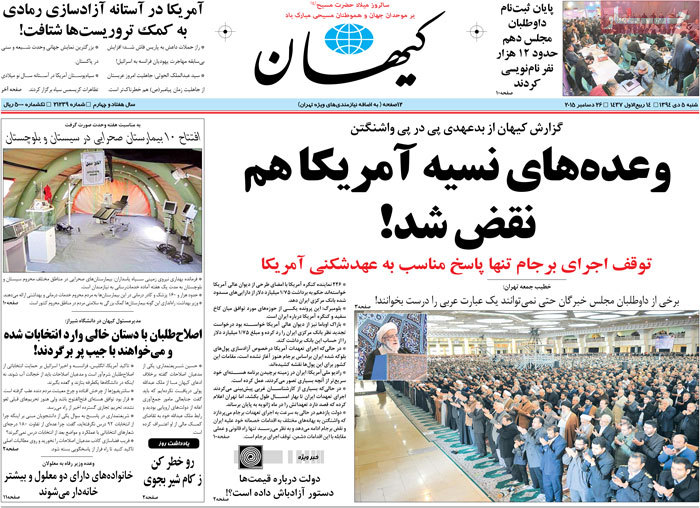 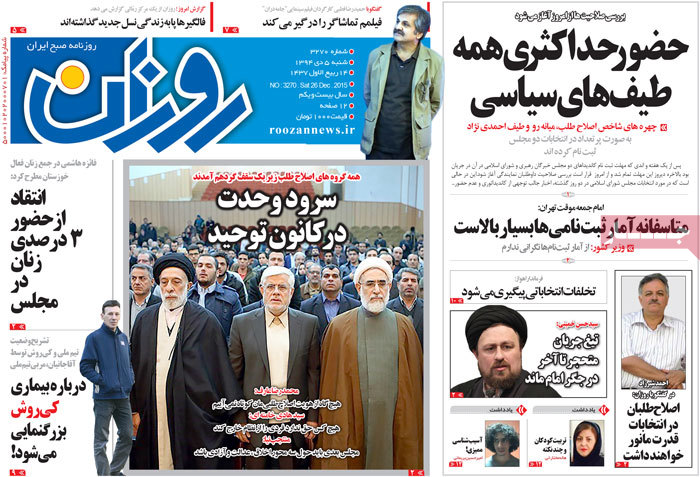 Setareh Sobh: The latest reports indicate that more than 11,000 people are seeking to enter parliament. 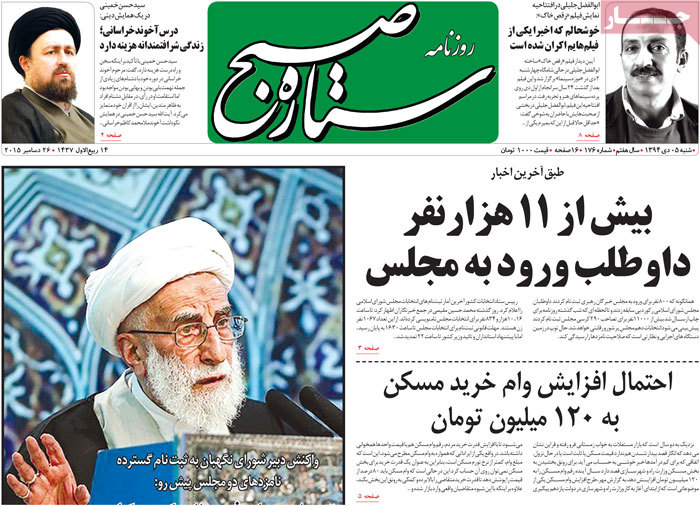 Sharq: Zarif has been recognized [by the Global Risk Insights] as the 2015 Person of the Year in Political Risk. 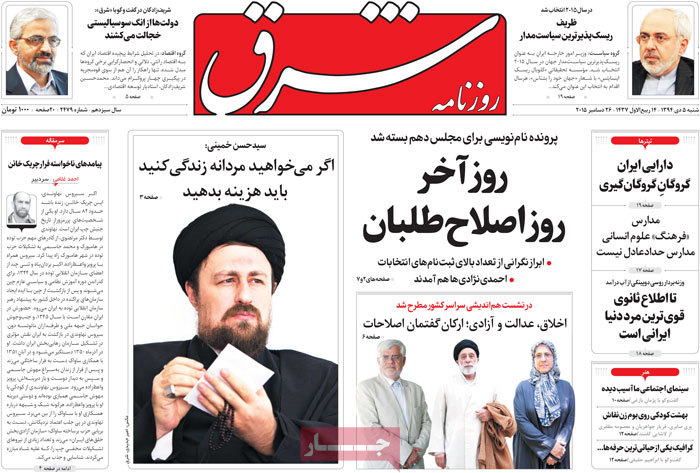 Vaghaye-e Etefaghiyeh: The [so-called] Worriers should be in parliament, said Mohsen Hashemi in an interview with the daily. 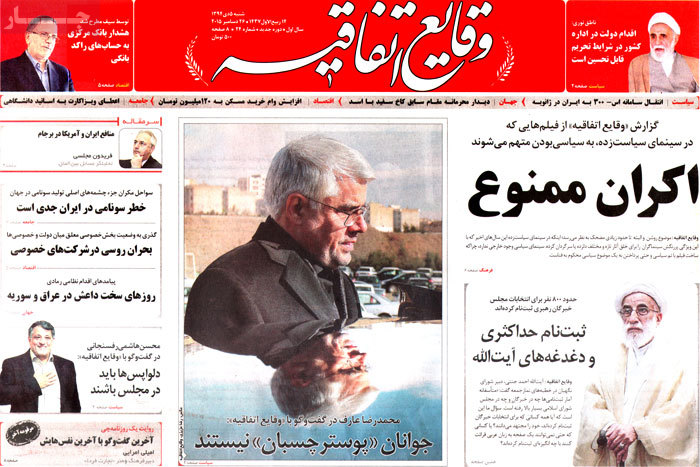