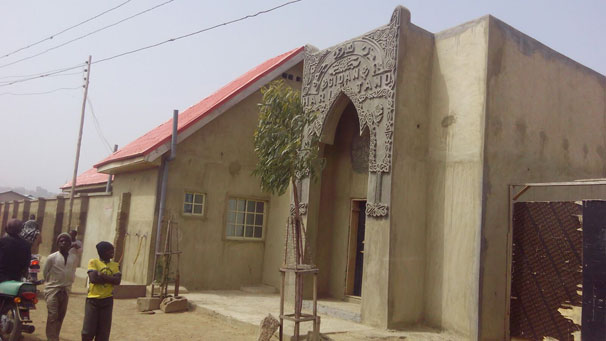 Ahlul Bayt News Agency – The Nigerian army which has in recent days killed and wounded hundreds of supporters of the country’s Islamic Movement has destroyed the home and burial place of its detained leader’s mother.

Umar Shuaibu, said Kaduna State Urban and Regional Planning Development Agency (KASUPDA) officials and the Nigerian army are seen selling the valuable properties of the demolished buildings to the public.

In continuation of the brutality started by Nigerian army, KASUPDA under instructions from government continue demolishing every place associated with Sheikh Zakzaky and Islamic movement. Earlier on, they completely destroyed the Husainiya Baqiyyatullah building (Shia Religious Center), Sheikh Zakzaky’s residence, Fudiyyah Islamic center, Darur-Rahmah; the site where Sheikh Zakzaky’s 3 sons and several others were buried, and now Hajia Hari Jamo (the mother of sheikh Zakzaky)’s house which is her own belonging and the place where her dead body is resting. Photos from the scene (attached) show crowds gathered outside the site as a bulldozer razes the building.

In a related development, Muhammad Mahdi Garba published the following: I just got this message from Mohammed Ibraheem Zakzaky [son of Sheikh El-Zakzaky]:

“I don’t know if you are aware of what has been going on for the past few days, but demolition teams backed by the army and looters have been going about destroying all properties associated with my father [Sheikh Zakzaky] and the Islamic movement. Including privately owned homes. “Yesterday they exhumed over sixty graves, including that of my three brothers who where killed last year. “Now they are on their way to demolish my aunt’s house, which is also where my grandmother and an aunt are buried.”

Sheikh Ibrahim El-Zakzaky was shot and detained last week when soldiers attacked the movement and its headquarters in Zaria. His condition or whereabouts are still unknown. A picture which emerged of the wounded sheikh showed him being forced to sit on the floor while he is being tortured by military personnel. His face shows signs of evident beating and there is a bullet hole to his torso.

The move against Zakzaky’s mother’s grave supports the view that the military is deliberately targeting the symbols and institutions of the Islamic Movement. Sheikh Zakzaky’s personal residence in Zaria has already been destroyed, as has the Hussainiyyah Baqiyatullah which served as the movement’s centre, in a bid to uproot the popular grassroots movement in its heartland.

The army has already destroyed dozens of graves belonging to victims of last year’s Al-Quds Day massacre when the army opened fire on a peaceful procession. A mosque which stood near the site of the graves has also been levelled. Three sons of the Sheikh were among the dead.

The army has already destroyed dozens of graves belonging to victims of last year’s Al-Quds Day massacre when the army opened fire on a peaceful procession. A mosque which stood near the site of the graves has also been levelled. Three sons of the Sheikh were among the dead.