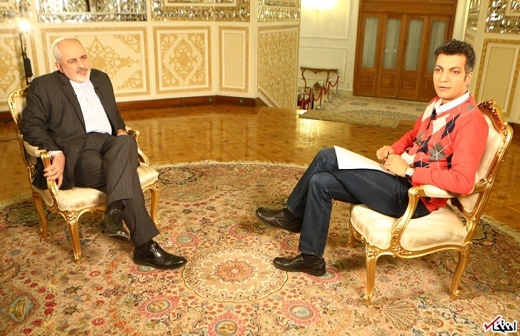 A sports-centered interview which stirred a national political controversy

A barrage of criticism has been unleashed against IRIB for not broadcasting FM Zarif’s interview, with people and officials unanimously calling for the national broadcaster’s impartiality.

Iranians huddled around their TV sets on Monday to watch an interview with Foreign Minister Mohammad Javad Zarif on “90”, a TV program focusing on football matches.

Last Thursday 90tv.ir posted a preview report on the interview and released an image of the foreign minister giving an interview which centered on sports diplomacy, vowing to air the full interview on Monday when Iranians were to celebrate Yalda: the longest night of the year.

That the top diplomat was to answer a series of questions on a sports program was good enough reason for the popular TV show and its famous host Adel Ferdowsipour to attract – this time around – all Iranians, whether or not they cared about soccer.

But to the disbelief of the viewers, the host appeared on the screen and said that the interview would not be broadcast, citing the disapproval of managers at Islamic Republic of Iran Broadcasting (IRIB) of the airing of the interview. “We owe you an apology. We offer our apology to Mr. Zarif. We hope the stage would be set soon and we can air the interview. The managers of the channel [IRIB’s Channel Three] did not deem it expedient to broadcast the interview with the foreign minister,” Ferdoesipour said.

IRIB’s refusal to air Zarif’s interview aroused yet another controversy in Iran with some arguing that the national broadcaster sides with one certain political faction and continues to oppose the Rouhani administration.

For their parts, Iranians turned to social networking sites to unleash their anger at IRIB, slamming it as biased. Reactions also came from political and cultural figures who critiqued IRIB’s workings and called for its impartiality.

Separate reports entekhab.ir released on December 22 focused on reactions by different figures to IRIB for denying the foreign minister airtime. The following is the translation of part of those reports:

The Foreign Ministry spokesman rejected as “irresponsible” an IRIB decision not to broadcast the foreign minister’s interview and called for the accountability of the national broadcaster’s managers vis-à-vis the public opinion in Iran.

He further said that the reason behind IRIB’s refusal to air the interview is not important, adding that for months those in charge of this TV program were insistently trying to prepare for the interview.

The spokesman further said that never does a TV producer or host try to conduct an interview on his or her own, adding that the logic says that they need to make coordination within their own organization and then ask for the interview. “These measures cannot be interpreted as personal.”

To us, it was IRIB which insisted on the interview over the past few months, Jaber Ansari said, adding that Dr. Zarif was not initially interested in the interview but he later agreed thanks to the insistence of the producers of the program.

He went on to say that IRIB should answer to the public opinion for its irresponsible behavior and shed light on the questions and ambiguities its decision has created.

On his Instagram page, Ali Motahari reacted to IRIB’s decision and wrote, “We need to shed tears for the grudges which are rooted in ignorance.”

He pointed to opposition by IRIB’s managers to the broadcast of the interview and said, “I was surprised to learn that the country’s foreign minister should not talk on a sports program on TV about sport diplomacy. I followed up the case and was told that news websites have reported the interview before its broadcast and certain people have voiced opposition to it. And Vatan-e Emrooz [a daily] has sent a letter to the IRIB president calling for the interview to be scuttled. I read the letter. The logic used by the writers of this letter was more regretful.”

Motahari further said, “The letter argued that since Mr. Zarif is the representative of a political current and “90” has many viewers, the broadcast of the interview will influence the upcoming elections, so it should not be aired. […]”

The Tehran MP then pointed to the appearance of Gholamali Haddad Adel – who is running for parliament – on TV and talking and reading poems on Yalda Night prior to “90” and said, “This is a double-standard policy. If there is nothing wrong with it [Haddad Adel’s TV appearance], which I think there is nothing wrong, why is it that the interview of Mr. Zarif – who is not running for office in the upcoming elections – was not allowed to be aired.

“Really we need to shed tears for the political atmosphere and ignorance-based grudges in the country. I urge IRIB President Mr. Sarafraz to pay attention to the principles of freedom of speech and impartiality. Now that we are in the build-up to December 30 [the day people turned out in force for rallies in support of the Leader in the wake of the 2009 unrest], we should not let the extremist acts of the previous years be repeated in these days.”

The head of the Iranian Hope Foundation has said that our main goal is to hold fervent elections with a high public turnout, adding that elections which are the most important political event in the country should boost solidarity and national unity and help meet public demands.

Mohammad Reza Aref also said that media have a mission to encourage people to take part in the elections, especially the national broadcaster which should let different groups with different viewpoints speak their mind and discuss their platforms.

He further said that one-sided approaches will produce no result because people are now more vigilant than before, adding that IRIB should place on its agenda efforts to talk people into going to the polls.

Zibakalam said that IRIB insists on the fact that it belongs to a certain group of hardline principlists and has no fear of revealing its leanings.

The political analyst went on to say that IRIB showed that it does not belong to 80 million Iranians; rather it belongs to four million people who voted in 2013 presidential elections for candidate Saeed Jalili.

Unlike his predecessor who tried to keep up appearances by broadcasting – off and on – interviews with non-principlist figures to show the national broadcaster is trans-factional, the current IRIB president does not seek to do so [rather, he seeks to push the principlist agenda].

He further said that IRIB is run on public budget and the taxes Iranians pay, but its performance is in fact an open defiance of taxpayers, adding that the national broadcaster openly ignores 92 percent of people.

“In IRIB, [people like] Seyyed Mohammad Khatami [former Iranian president], Mohammad Javad Zarif and other independent university professors are denied airtime. The very eight percent of people who voted for Saeed Jalili are entitled [to airtime at IRIB]. IRIB openly sacrifices the rights of 92 percent of Iranians for the remaining eight percent who support hardline principlists.”