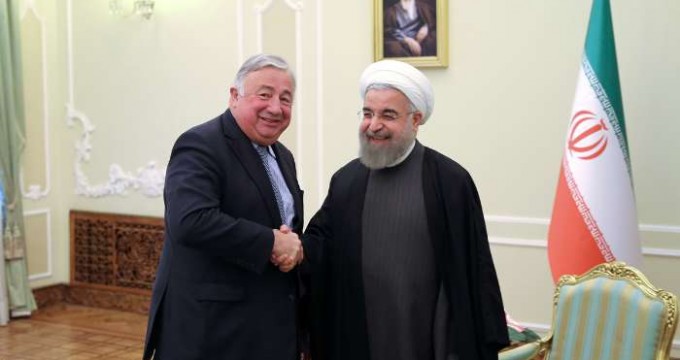 Tehran, Dec 20, IRNA – President Hassan Rouhani said on Sunday that grounds are well prepared for expansion of all out relations and cooperation between Tehran and Paris as both sides share many commonalities.

President Rouhani made the remarks in a meeting with visiting French Senate Speaker Gerard Larcher in Tehran on Sunday.
The two sides’ officials should seize the opportunities to help bolster relations between the two nations, he said.
The Islamic Republic of Iran and France should take advantage of the opportunity provided by termination of anti-Iran sanctions and implementation of the Joint Comprehensive Plan of Action (JCPOA) to broaden cooperation and increase volume of their trade exchanges.
The visit of French officials to Iran after clinching the deal between Iran and G5+1 indicates that the era of broadening relations and cooperation between Iran and France has begun, President Rouhani said.
The JCPOA proved that global issues could be resolved through logic and negotiations, he said.
Expressing condolence on the terrorist incidents in France claiming lives of many civilians, he said Iran hopes the red handed criminals would be identified and brought to justice as soon as possible.
Active role of terrorist groups in promoting insecurities in the region and the world must not be ignored, he said adding that Tehran and Paris should broaden mutual cooperation in resolving regional and global disputes.
Terrorist groups such as Al-Qaeda and Daesh seek to dominate the region and this should be regarded as a global threat, he said.
Unfortunately, some countries are now providing the terrorist groups with weapons and financial aid and identification of these countries is not a tough task, he said.
‘We should not let certain countries to make instrumental use of terrorists to attain their sinister goals,’ he said.
Elsehwere in his remarks, President Rouhani said Syrian political reforms should be conducted by its own people. Iran and France can closely cooperate in paving the way for return of Syrian displaced people to their homeland, he said.
The French Senate speaker, for his part thanked the Iranian president for his message of condolence to the victims of terrorist attacks in Paris and said the French government and parliament attach importance to the upcoming visit of the Iranian president to the country.
Expansion of economic cooperation between Tehran and Paris is of prime importance, he said, adding that during the upcoming visit of the Iranian president and other Iranian officials to Paris the two sides would clinch agreements on expansion of relations and cooperation between the two countries.