A look at Iranian newspaper front pages on Dec. 20

IFP has taken a look at the front pages of newspapers on Sunday and picked headlines from 18 of them. IFP has simply translated the headlines and does not vouch for their accuracy.

High levels of air pollution in the capital leading to the closure of schools dominated the front pages of Iranian newspapers on Sunday.

Ettela’at: Iran’s presence in Syria is legal and legitimate, said Foreign Minister Mohammad Javad Zarif in an interview with The New Yorker.

He further said, “Our purpose here is to facilitate a process of national unity and reconciliation between those Syrians who are interested in finding a peaceful resolution.”

Ettela’at: Millions of Tehran residents under the lead-tinged sky of the most polluted city in the world.

Ettela’at: The grandson of the late Imam Khomeini has said that egotism is the biggest problem humanity is faced with.

In the absence of sympathy and compassion, results will elude us, Seyyed Hassan Khomeini said.

Ettela’at: One-hundred-eighty members of the Saudi-led coalition were killed in a Yemeni response to violation of ceasefire by the Saudis.

Ettela’at: The minister of roads and urban development has said that the previous government owes some $127 billion to the national economy.

Abbas Akhoundi further said without development of the railroads, urbanization and urban transport would have a bleak future.

Ettela’at: Some 845 individuals fielded their candidacy on the first day of registration for parliamentary elections.

The head of the Electoral Commission has said that the executive panels simply sign up the potential candidates; the responsibility to vet them rests with the Guardian Council.

Ettela’at: Thirty-two products of knowledge-based companies have been unveiled.

The minister of science has said that formation of a fund to support researchers paves the way for the commercialization of research at knowledge-based firms. 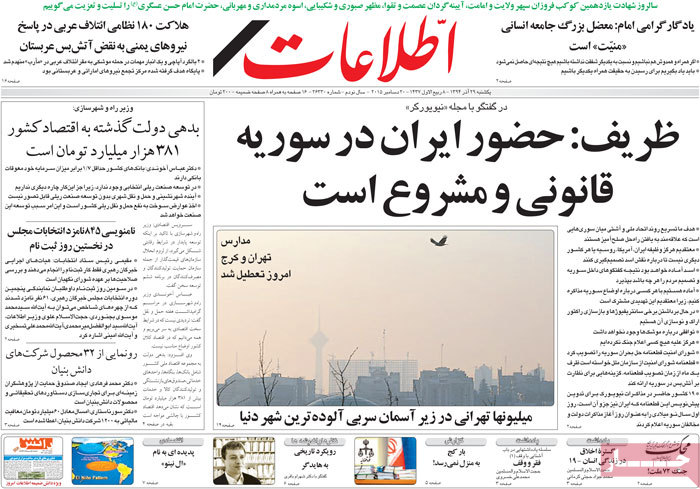 Abrar: A 24th hearing in the trial of the so-called oil defendants [a reference to Babak Zanjani and his co-defendants] will be held on Sunday. 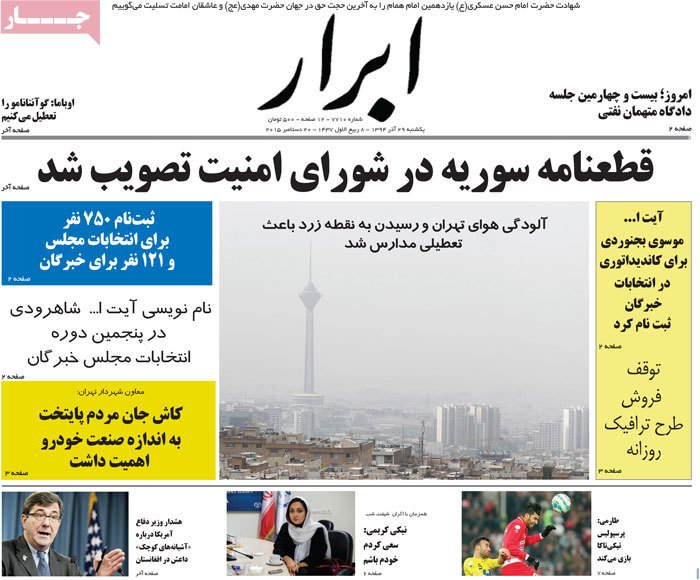 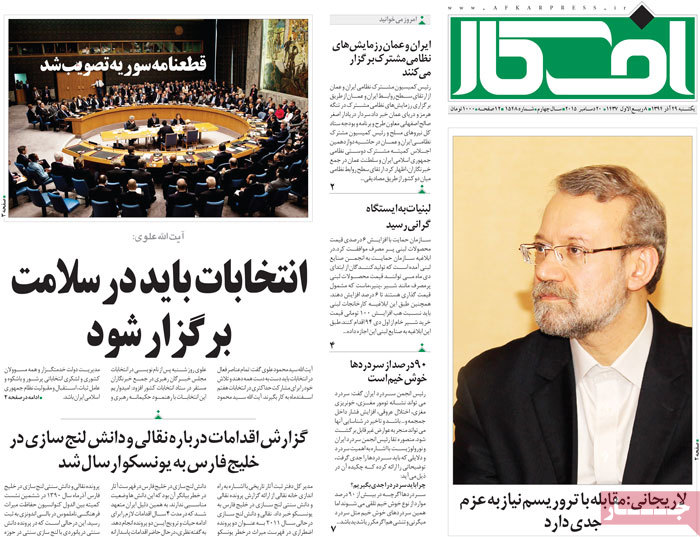 Aftab-e Yazd: Mohammad Reza Aref [a reformist leader] has said that he is optimistic about interaction with the Guardian Council [over the vetting of reformist candidates].

Aftab-e Yazd: A resolution that satisfied everyone [a reference to the UN resolution on Syria]. 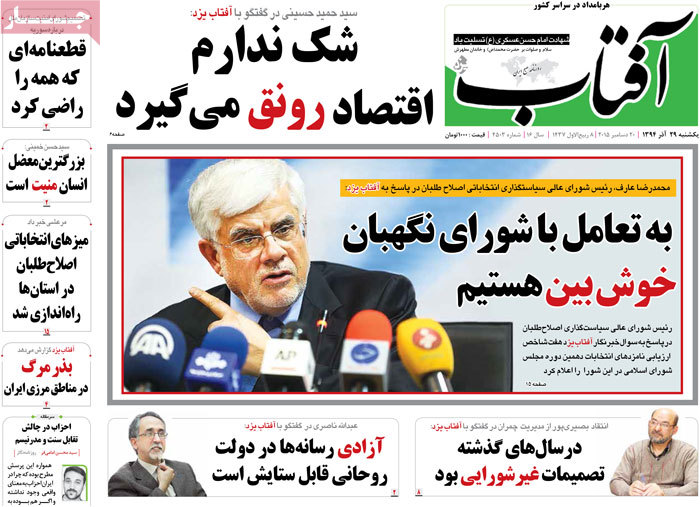 Arman-e Emrooz: In an interview with the daily, Chairman of the Expediency Council Ayatollah Akbar Hashemi Rafsanjani has said that he has talked his son Mehdi [who is in prison] out of going on hunger strike.

“I told [Seyyed] Hassan [Khomeini] that he cannot be indifferent…. I have not changed, I still insist on my principles…. I stand ready to act as a mediator in the vetting process…. My contacts with [President] Rouhani have increased…. I am still the interim Friday prayer leader of the capital… I am opposed to those who view the votes of the public as decorative,” the top councilor said. 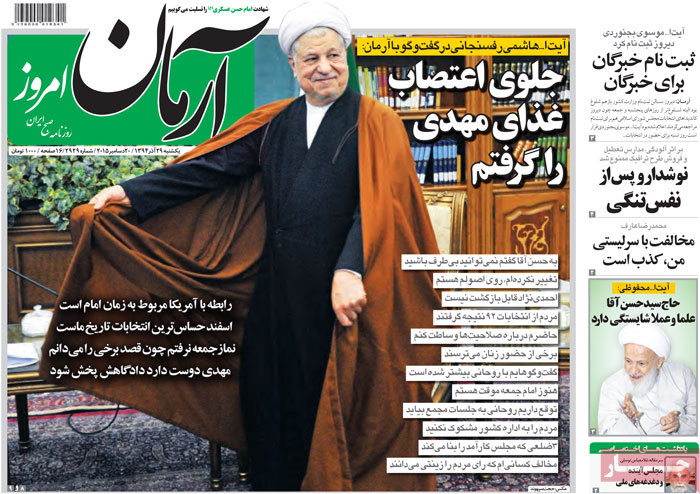 Asrar: The president of the French Senate has said that President Rouhani’s France visit will usher in an era of new cooperation between Tehran and Paris.

Asrar: The chairman of the Expediency Council has rejected allegations that Iran is meddling in Nigeria’s [internal] affairs. 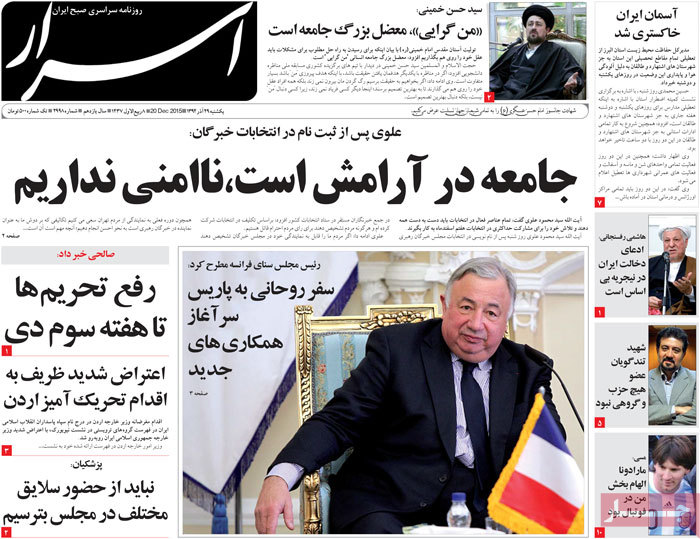 The daily has a report on the pledge reformists have made to women and youth about their share of legislative seats in the 10th parliament. 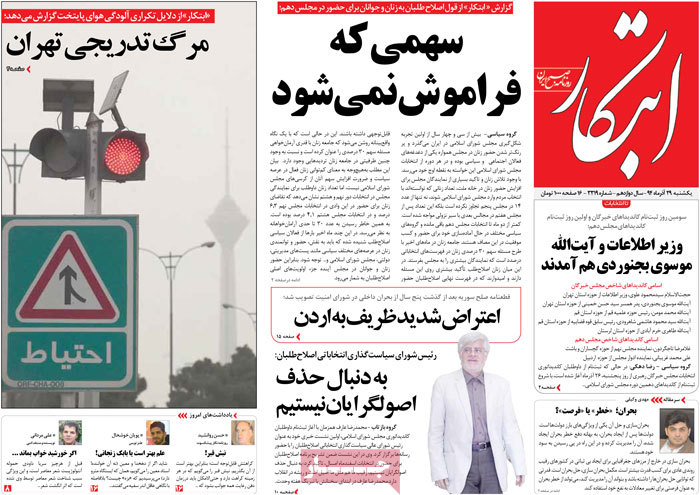 Emtiaz: Alireza Faghani, an Iranian referee, will officiate the final of the FIFA Club World Cup. 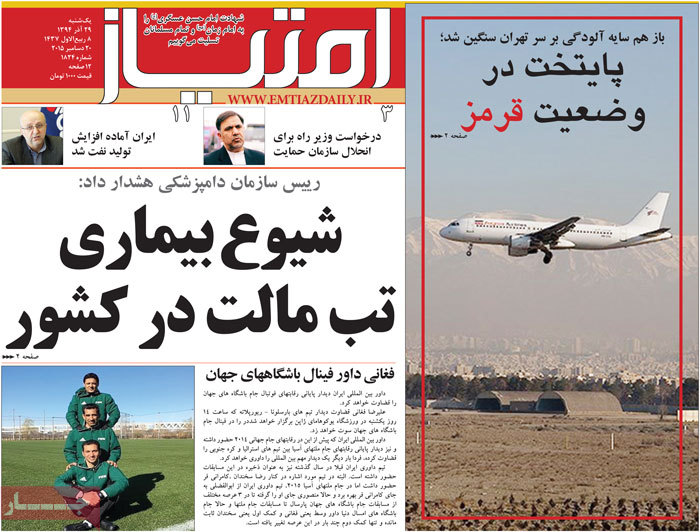 Hemayat: Formation of a leadership council goes against the Constitution, said Ayatollah Momen, a member of the Guardian Council. 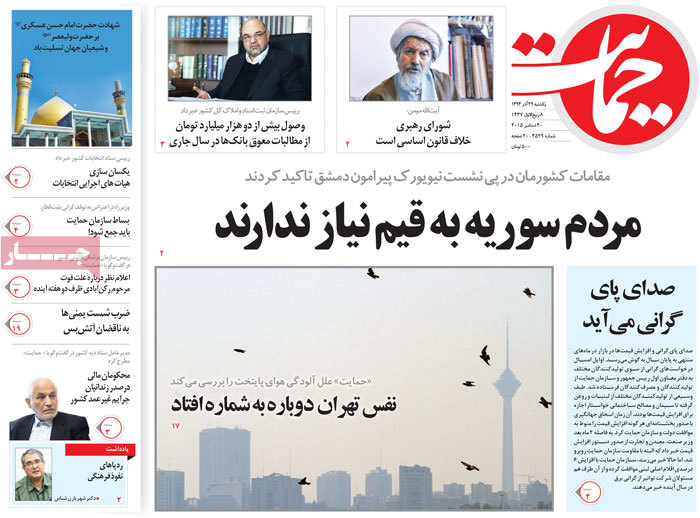 Iran: [Result of] An opinion poll shows that turnout for upcoming [parliamentary and Assembly of Experts] elections is projected to stand at 59 percent. 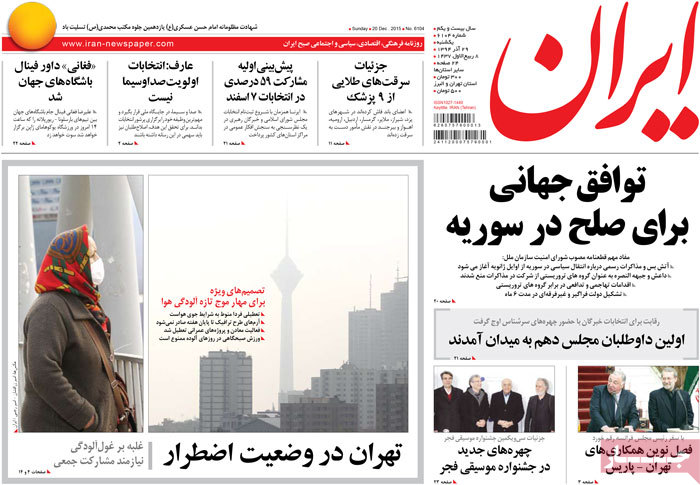 Jomhouri Islami: The industry ministers of Iran and Germany have underlined the need for expansion of economic ties between the two countries.

Jomhouri Islami: President Rouhani has called for those who commit environment offenses to the south of the capital to be seriously dealt with. 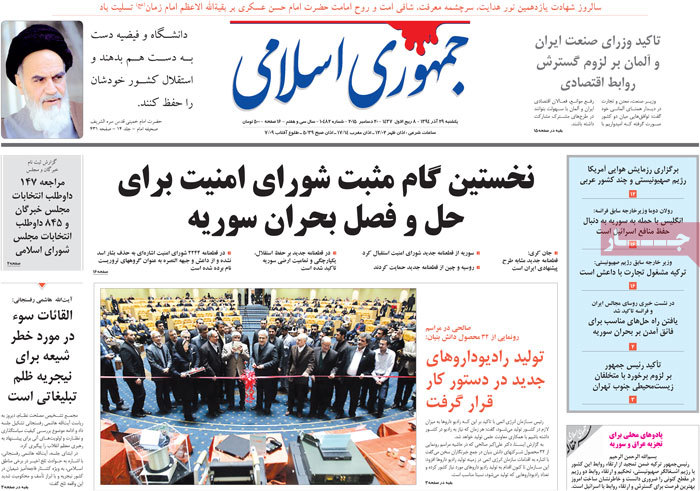 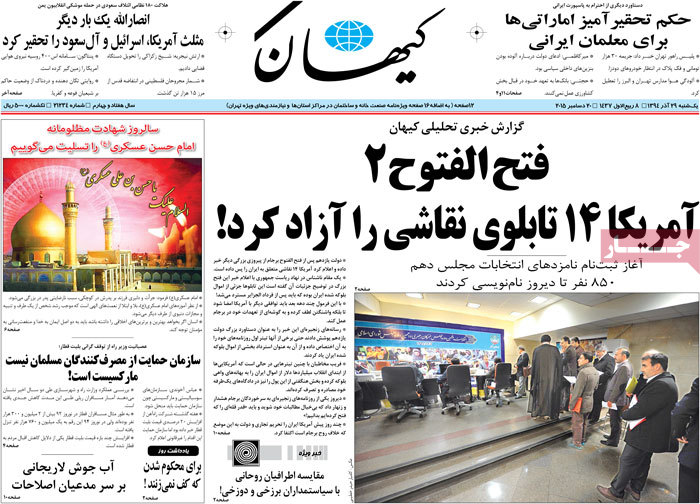 Rah-e Mardom: Authorities have given the go-ahead to a hike in milk, yogurt and cheese prices. 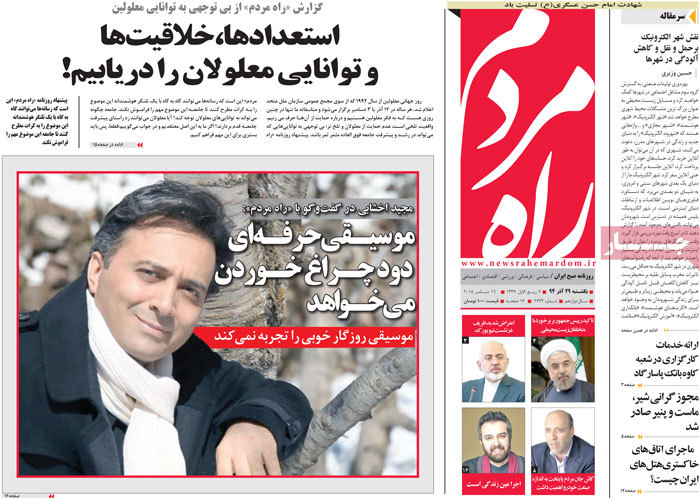 Resalat: The measure the UN took against Daesh came too late, said Ali Akbar Velayati, an aide to the Supreme Leader. 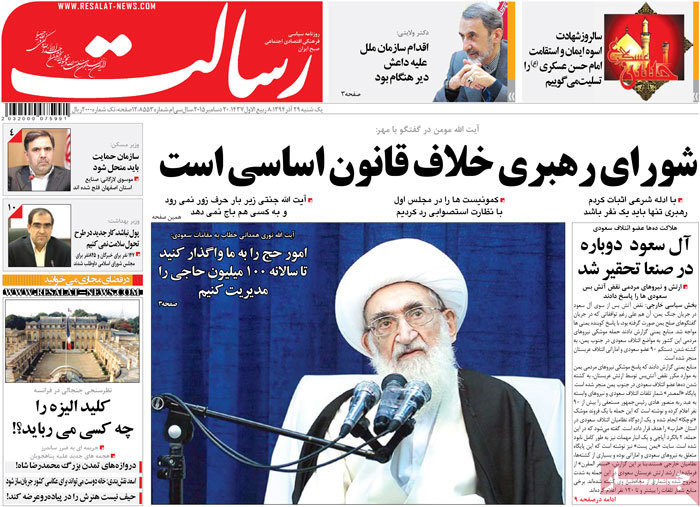 Saheb Ghalam: Ali Akbar Velayati has said if we fail to take on our enemies in Syria, we’ll have to lock horns with them on our borders. 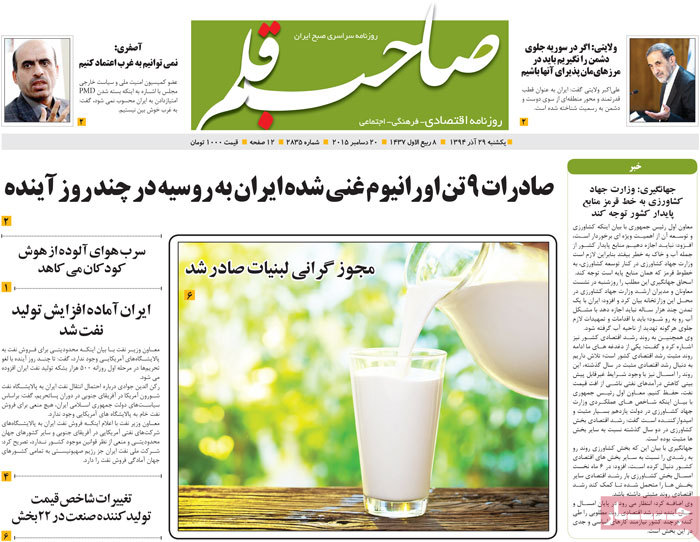 Sepid: The health minister has said that in the absence of finances, the Healthcare Transformation Plan will feature no new packages. 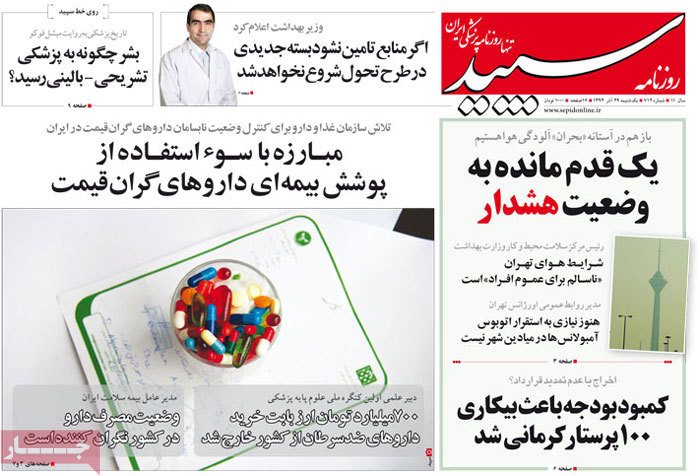 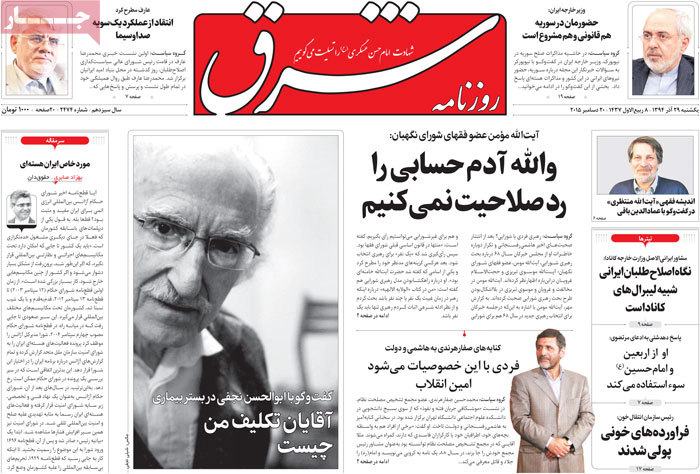 Vaghaye-e Etefaghiyeh: Mowaffak al-Rubaie, a distinguished Iraqi statesman, has said in an interview with the daily that Turkey buys oil from Daesh $7 a barrel.

Vaghaye-e Etefaghiyeh: Hossein Mousavian, a former Iranian nuclear negotiator, has told the daily in an interview, “We need to help [Turkish President] Erdogan.” 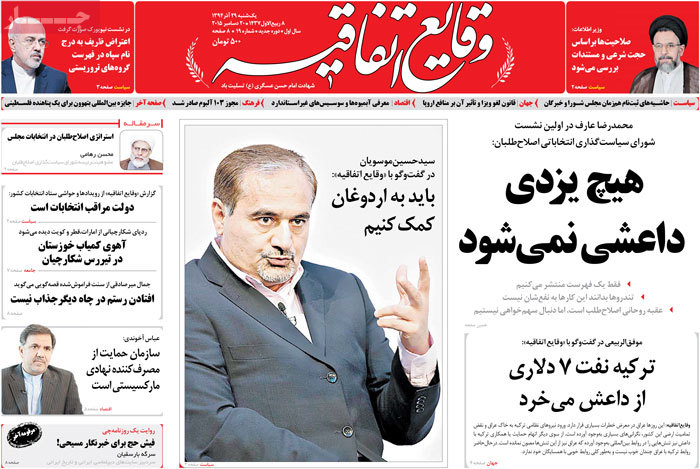