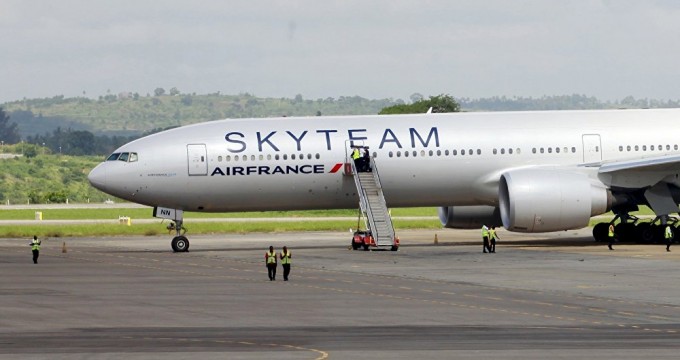 NAIROBI, Kenya (AP) — The latest developments on an Air France flight from Mauritius to Paris that was diverted to Kenya after a suspected bomb was found on it.

A Kenyan police official says six passengers are being questioned over a suspected bomb found on an Air France plane that forced the jet flying to Paris from Mauritius to make an emergency landing in Kenya.

The police official, who insisted on anonymity because he is not authorized to speak to the media, said during the flight a passenger noticed something in a lavatory that looked like “a stopwatch mounted on a box.”

The passenger reported the device to the cabin crew, who informed the pilots, leading to an emergency landing at the airport in the Kenyan city of Mombasa.

The official said one of those being interrogated is the man who reported the package.

– by Tom Odula in Nairobi, Kenya

Flight 463 is Air France’s third plane to be diverted in recent weeks.

The plane flying from Mauritius to Paris was diverted early Sunday to the Kenyan city of Mombasa after a suspicious package was found. Bomb experts are examining it.

Two other Air France flights from the U.S. to Paris were diverted on Nov. 18 after bomb threats were received but no bombs were found.

France has been under a state of emergency since the Nov. 13 attacks in Paris that left 130 people dead and hundreds wounded.

Islamic State extremists have claimed responsibility for the attacks in Paris as well as for the Oct. 31 crash of a Russian passenger plane in the Sinai desert that killed all 224 people aboard. Moscow says that crash was caused by a bomb on the plane and has demanded that Egypt increase security at all its airports.

Kenya’s interior minister says several people who were on Air France Flight 463 are being questioned in Mombasa.

Minister Joseph Nkaissery spoke at a news conference at the Mombasa airport, where the flight from Mauritius to Paris was diverted early Sunday at the request of its pilots. Authorities say a suspicious package was found in one of the plane’s lavatories and experts in Mombasa were examining it.

Air France says the plane was carrying 459 passengers and 14 crew members. Nkaissery did not say how many are being questioned or if they were passengers or crew.

The minister said another Air France plane will pick up the passengers once the interrogations are done. He did not say how long that would take.

Air France says investigators are working to confirm whether the package found on Flight 463 contained explosives.

The Boeing 777 was heading to Charles de Gaulle airport in Paris from Mauritius when its pilots requested an emergency landing at 12:37 a.m. Sunday in the Kenyan city of Mombasa.

Kenyan authorities said the suspected device was found in one of the plane’s lavatories.

The Air France spokeswoman, who could not be named to discuss the ongoing investigation, said local authorities were also interviewing passengers. The airline has sent a substitute plane to pick up the passengers.

A passenger on Air France Flight 463 says everything was calm and passengers thought there was simply a technical problem as their flight to Paris was being diverted to the Kenyan city of Mombasa.

Passenger Benoit Lucchini says “the plane just went down slowly, slowly, slowly. So we just realized probably something was wrong, but the personnel of Air France were just great. They were just wonderful. So they kept everybody calm. We did not know what was happening.”

He spoke to journalists in Mombasa after getting off the plane.

Kenyan police say the flight from Mauritius was diverted after pilots requested an emergency landing at 12:37 a.m. on Sunday. The Kenyan Airports Authority says a suspected explosive device was found in the plane’s lavatory.

The Kenya Airports Authority says what is “believed to be an explosive device has successfully been retrieved” from an Air France flight.

Police say Air France Flight 463 was heading to Charles de Gaulle airport in Paris from Mauritius when the pilots requested an emergency landing at the Moi International Airport in the Kenyan coastal city of Mombasa at 12:37 a.m. Sunday.

Police spokesman Charles Owino says the device was discovered in a lavatory of the Boeing 777. He says all of the plane’s 459 passengers and 14 crew were safely evacuated and bomb experts are studying the device.