A look at Iranian newspaper front pages on Dec. 19

IFP has taken a look at the front pages of newspapers on Saturday and picked headlines from 17 of them. IFP has simply translated the headlines and does not vouch for their accuracy.

The start of registration of those who seek to contest the Assembly of Experts elections on February 26 dominated the front pages of Iranian newspapers on Saturday with reformist-leaning dailies highlighting the registration of the grandson of the late founder of the Islamic Republic.

Ettela’at: A warm welcome by [political] figures on early days of registration for the Assembly of Experts

As many as 86 people have fielded their candidacy for the Assembly of Experts in the first two days of registration.

The registration of those running for the Islamic Consultative Assembly will get underway as of Saturday (December 19).

Ettela’at: The pensioners are top on the list of those who will be given the credit cards the government is expected to issue.

A deputy minister of cooperatives, labor and welfare has said that the pilot distribution of the pre-paid cards [people are to be provided with to purchase Iranian-made goods] will get underway in a province near Tehran and in the south as of this week.

Ettela’at: Russian President Vladimir Putin has said that Turkey and the West are to be blame for the emergence of ISIS [Daesh].

President Putin further said that peace with Turkey is a distant possibility as long as [Turkish President Recep Tayyip] Erdogan is in power.

Ettela’at: TheIranian people held rallies after Friday prayers in protest at the massacre of the Shiites in Nigeria.

Worshippers in Tehran and other provincial centers across the country staged rallies to protest the killings of Shiites and disrespect for religious sanctities in Nigeria.

Ettela’at: Deputy Foreign Minister Abbas Araghchi [who is also the head of the JCPOA Implementation Commission] has said that the Joint Comprehensive Plan of Action will be implemented in three weeks.

In another development, the US secretary of state has sent a letter to the US Senate Committee on Foreign Relations confirming Iran’s compliance with the conditions and provisions of JCPOA.

Ettela’at: The first edition of the National Congress of Iran’s Peace Soldiers has introduced six role models of peace and authority.

Afarinesh: The speaker of the Islamic Consultative Assembly has said that the closure of the possible military dimensions (PMD) file is a valuable achievement. 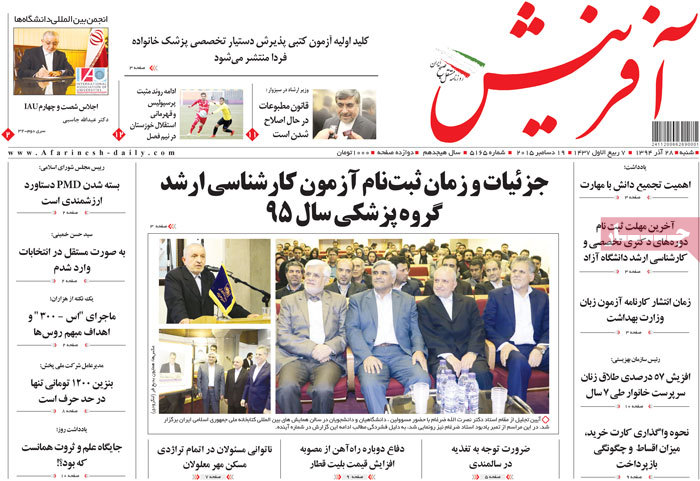 Afkar: Ali Akbar Salehi, a nuclear diplomat, has been named one of Nature’s “ten people who mattered” in 2015. [The science journal has recently named ten people in science who mattered in 2015]. 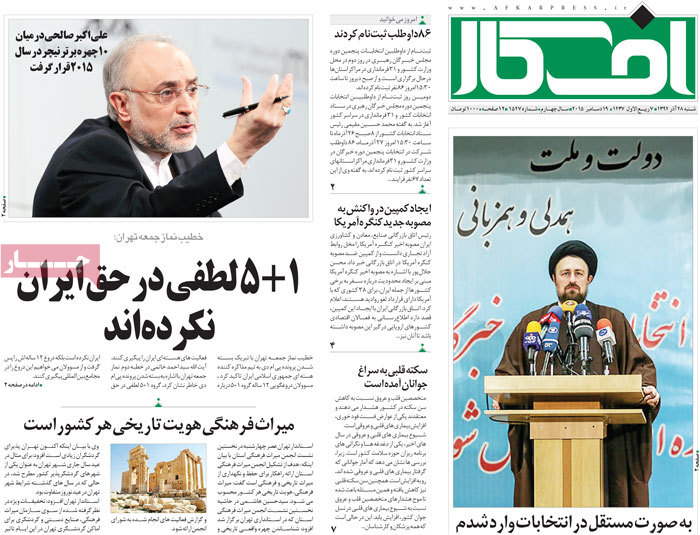 Aftab-e Yazd: “If I were like [Mahmoud] Khavari [a former managing director of Bank Melli who has fled to Canada], I would have traveled to Britain, not Karbala,” said Saeed Mortazavi [a former judge and director of the Social Security Organization who is on trial for corruption]. 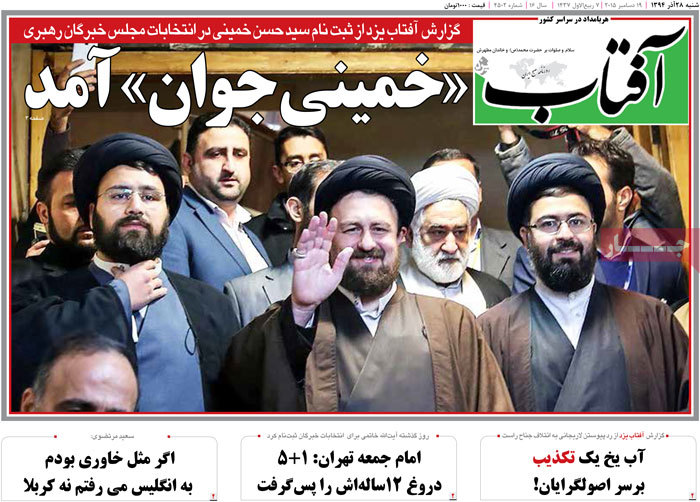 He also said that pressures on Rouhani will grow in the build-up to the elections. 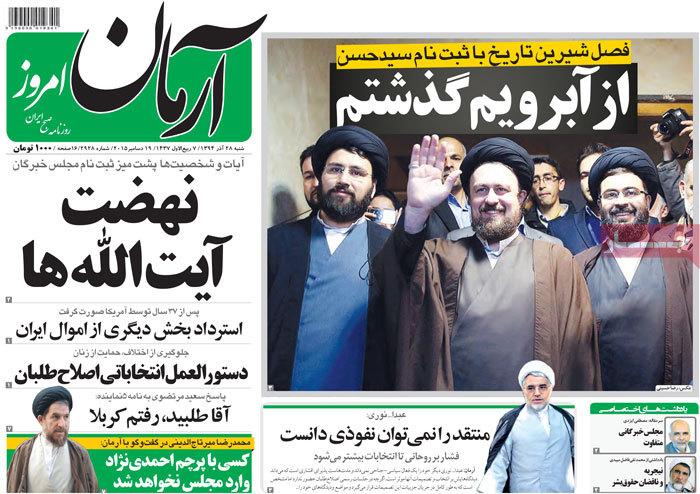 Asrar: Director of the Atomic Energy Organization of Iran Ali Akbar Salehi has said that people’s security cannot be restricted in the name of security.

Asrar: Next year [starting March 21, 2016] will be the honeymoon of Iran’s economy, said Head of Iran’s Chamber of Commerce, Industries, Mines and Agriculture Mohsen Jalalpour. 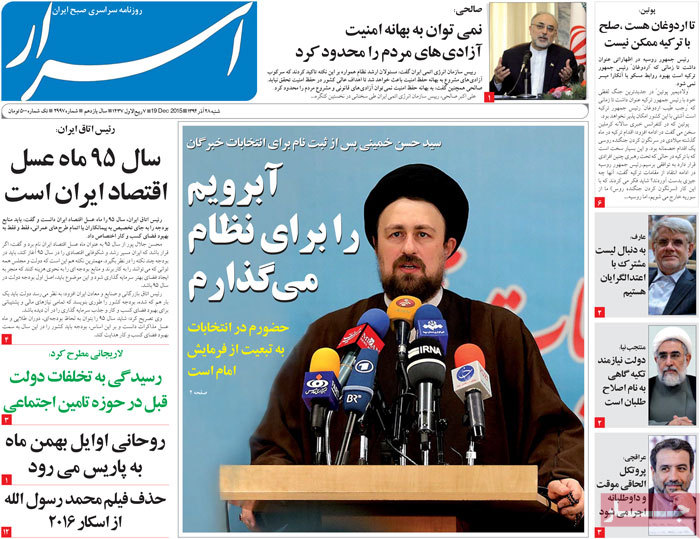 Bahar: Parviz Parastui, a famous Iranian actor, said, “I am concerned about the future of Iran’s cinema.” 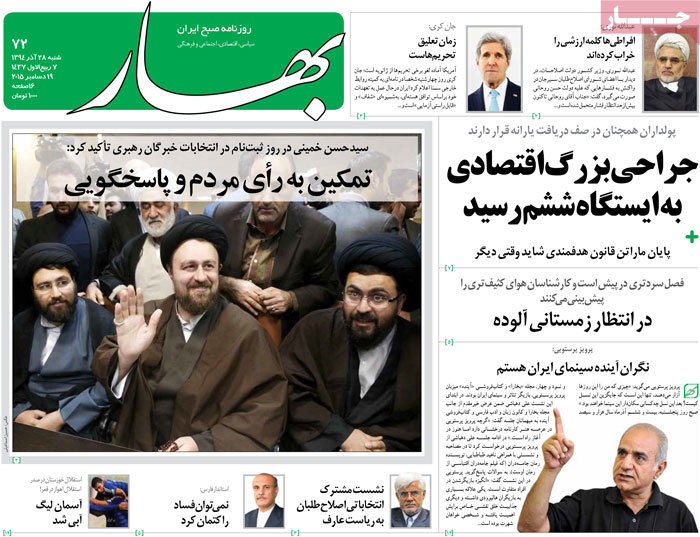 Etemad: “I will put on the line my reputation for this [carrying out my responsibility]“, said Seyyed Hassan Khomeini, the grandson of the late Imam Khomeini. 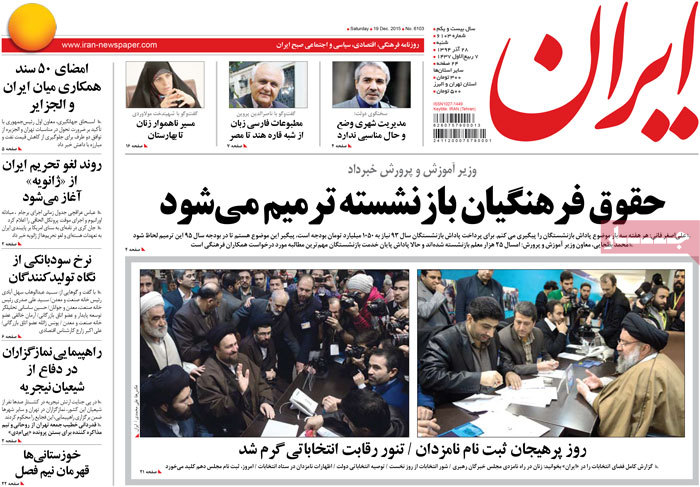 Javan: Chief of Staff of the Iranian armed forces Major General Hassan Firouzabadi has warned that the new gambit of having a “Leadership Council” is against the Rule of Religious Jurisprudent and the authority of the establishment.

[His comments seem to be in reaction to recent remarks by the chairman of the Expediency Council who floated the idea of a leadership council.] 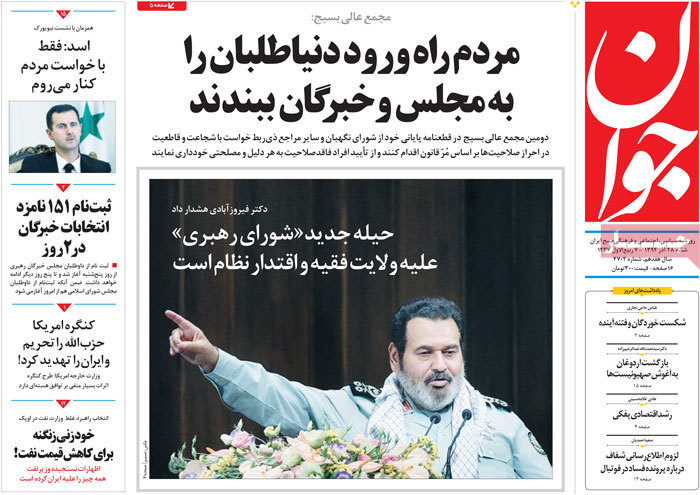 Jomhouri Islami: The Presidential Center For International Legal Affairs (CILA) said the US, after 37 years, returned another part of Iran’s assets. 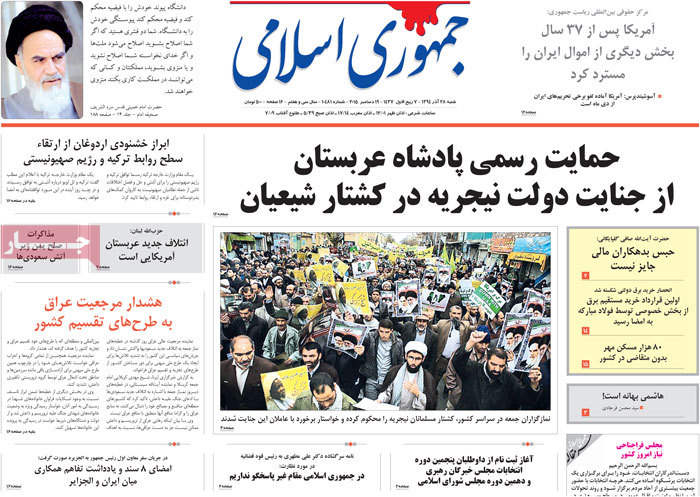 Kayhan: The sale of French-made cars has grown in Iran ten-fold in one month. 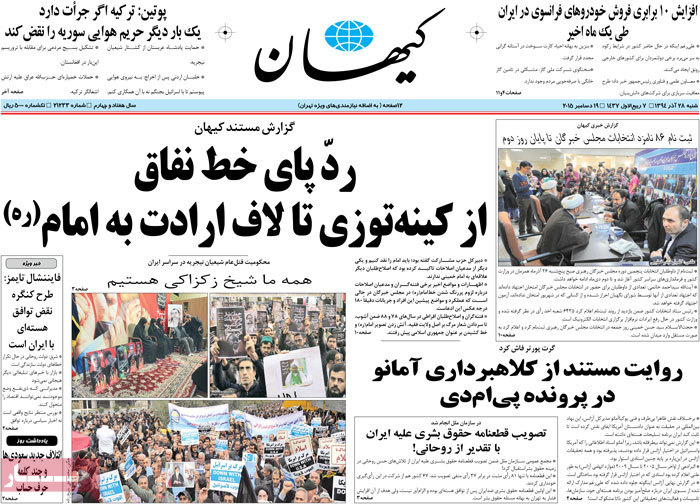 Resalat: Seyyed Hassan Khomeini, the grandson of late Imam Khomeini, has said, “My presence in [Assembly of Experts] elections is meant to defend the principles of the Islamic Republic.”

Sharq: Former President Ahmadinejad has said, “I saved the revolution from the secularists.”

Sharq: Authorities at Tehran’s Imam Khomeini Hospital have failed to discharge a rough sleeper because she could not afford the medical charges. 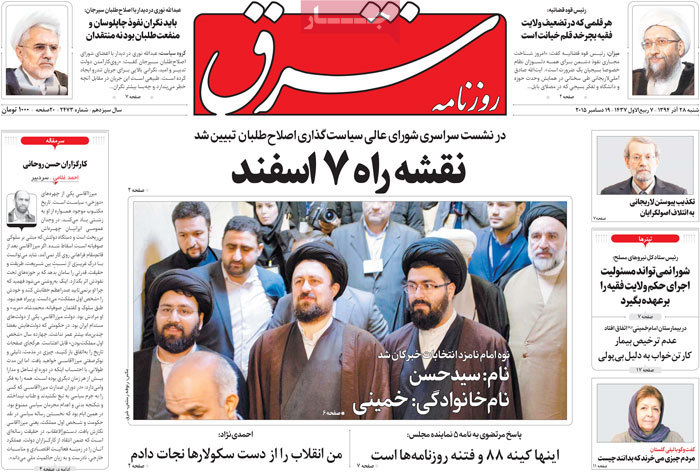 The Oscars Foreign-Language shortlist is out [with nine films going to the final]. 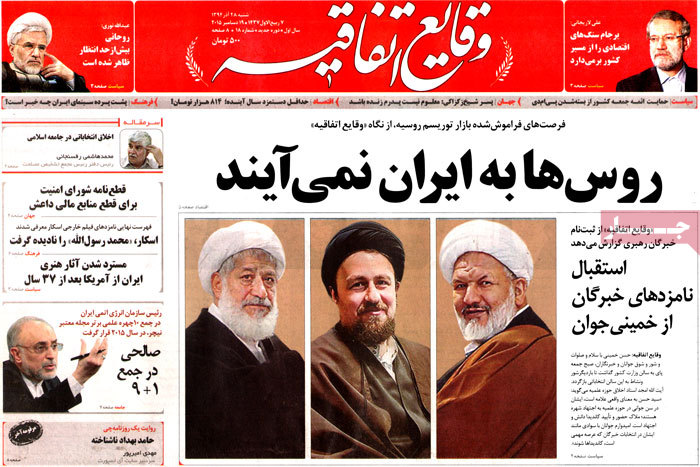