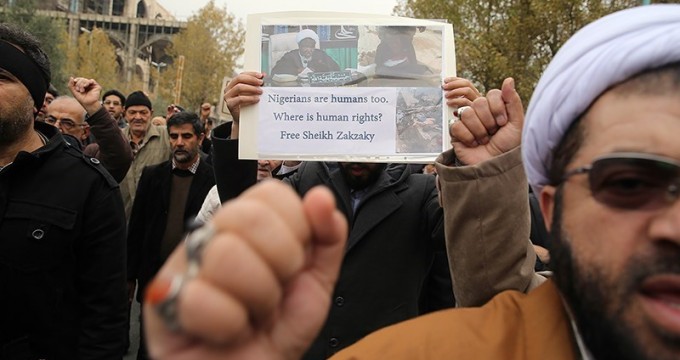 TEHRAN (Tasnim) – Thousands of Iranian people from every walk of life held protest rallies in various cities across the country on Friday to condemn the recent killing of dozens of Shia Muslims in Nigeria by the African Country’s army.

During the demonstrations held after Friday Prayers in various cities, including the capital, the Iranian worshippers voiced their outrage over the Nigerian army’s attacks, which led to the deaths of a large number of Shia last week.

Carrying pictures of Ibrahim Zakzaky, the jailed leader of Nigeria’s Islamic Movement, and holding placards reading “We Are All Sheikh Zakzaky”, the demonstrators called for his immediate freedom.

The protesters also chanted slogans against the US, the Zionist regime of Israel and some regional countries which support Takfiri terrorists.

According to reports, at least 100 people were killed this past weekend when the Nigerian army raided the Islamic Movement headquarters and arrested its leader in the northern city of Zaria.

On Sunday, the army raided several buildings connected to the Islamic Movement and the home of Zakzaky. They arrested him and killed key members of the group, including Zakzaky’s second-in-command and spokesman.

Aliy, Zakzaky’s son, was among dozens who lost their life in the raid.

Three of Mr. Zakzaky’s sons had been killed in a similar attack by the Nigerian Army in July 2014.

The Nigerian Army alleges that members of the Islamic Movement were involved in an attack on the convoy of the Chief of Nigeria’s Army Staff, Tukur Buratai. The movement has vehemently denied the allegations.