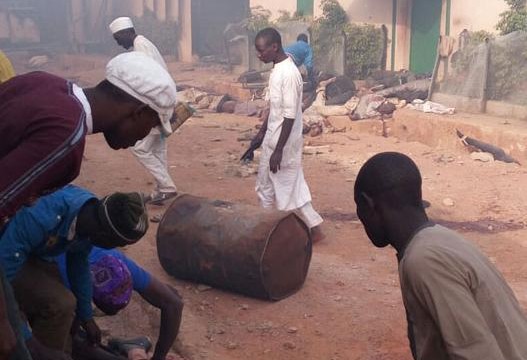 Tehran, December 16, The Iran Project- Top Iranian clerics continue to react over the massive killing of Nigerian Shia Muslims by the country’s army. In separate remarks, Iran’s senior clerics strongly slam the killings, demanding justice for the perpetrators of the massacre.

Grand Ayatollah Naser Makarem Shirzi on Wednesday urged Muslim world to declare public mourning for deaths of innocent Muslims in Nigeria, saying that the Muslim governments should intervene the case and make the government responsible for its acts.

Referring to the details of the incident, he stressed that the only guilt Nigerian Shia Muslims committed was to take part in peaceful Arbaeen march.

The head of Iran’s Assembly of Experts, Mohammad Yazdi also made remarks about the Nigeria incidents, demanding the human rights organizations and Nigerian president to investigate the root causes of the violence and to prepare the ground to free the Shia leader, Ibrahim al-Zakzaky. In a statement released on Wednesday, Ayatollah Yazdi further urged justice for those perpetrated such bloody crackdowns.

Clashes in Nigeria erupted when Nigerian Army alleges that members of the movement were involved in an attack on the convoy of the Chief of Nigeria’s Army Staff, an accusation which was strongly denied by the Islamic Movement.