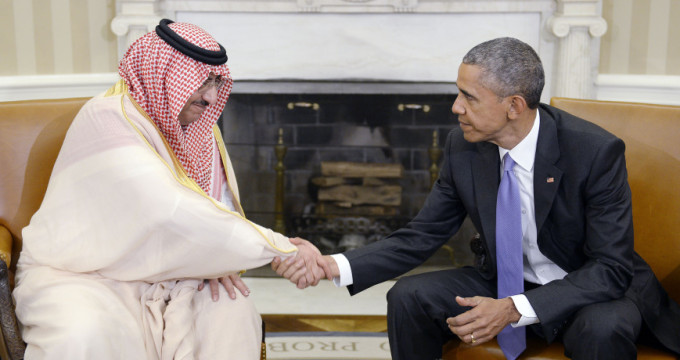 How is neo-fascist Wahhabism living on?

Alwaght- The Saudi Arabian support of the terrorist groups is one of the cases that can be pointed to as the explicit yet difficult to substantiate facts of the West Asia region. Something which is always deliberated, however, there are no official resources to openly reveal the support process, as if there exists a covert factor which prevents illumination about the process.

Concerning the Saudi Arabia’s backing of such terror organizations as ISIS and Al-Qaeda two facts need to be taken into consideration: The Saudi official authorities’ supports presented to the takfiri and Salafi groups and the Saudi ordinary people’s support of such groups. Although there have been images published showing the Saudi goods and equipment in the hands of ISIS and other terrorist groups, no official and solid evidences of the process of Saudi Arabian officials’ aids to the terrorist organizations have been leaked yet.

The Saudi authorities have always been accused of backing up the Salafi and takfiri terrorist groups. Though Saudi Arabia claims that it is controlling the country’s official entrances and terminals in order to choke up the paths suspected of aiding the terrorists, the existence of ISIS’ funding campaigns on the social networking websites in Saudi Arabia challenge the Saudi authorities’ claims. The point to be taken into account is that the Saudi funders of the terrorists transfer their financial resources to Kuwait, one of the safe havens for funding the terror organizations.

In addition to financial supports presented to the Salafi and Takfiri organizations, the Saudi princes’ indirect strengthening of these groups should not be ignored. Founding radical schools (madaris) in its territories or other poor Muslim countries, Saudi Arabia prepares the ground for growth of the extremism across the globe. The binary of good and evil is propagated in such Saudi-funded schools. The absolute good is represented as Wahhabism and, on the opposite side, the infidels are the most evil.Infidels, accordingly, are ranged from the Shiite Muslims, non-Wahhabi Sunni Muslims, the Christians and Jews to other cults and faiths. In the schools the idea of armed battling against such infidels is well taught and fighting against them is called jihad.

Last year, the Freedom House, a US-based non-governmental organization (NGO), has published a report, not only pointing to the Saudi Arabia’s attempts to found such schools but also it highlighted the exporting of the ideology of these schools to other countries’ Muslims, including the European countries’.

The problem gets even more complicated when in cities of the poor African and West Asian countries there are only two choices: whether to attend the radical schools or not to study at all. In fact, the poverty is abused by the extremism. Therefore, the regular and traditional Islam would not keep standing while being invaded by the neo-Fascist Wahhabism and the money spent in this way. Professor Joseph Boot, the adviser of the Angelo-American council for security and intelligence, believes that the Saudi regime has spent over $100 billion in past three decades on founding such schools and supporting them financially, while the Soviet Union during its 70-years age has spent only $7 billion for promoting its communist ideology. Actually, in the 1980s Riyadh in association with the Central Intelligence Agency (CIA) has created the terrorist fighting taking its cue from the Vietnam war experience under the so-called modern jihadism title to jeopardize the Soviet Union and its positions in Afghanistan.

On the other hand, the Western powers’ reactions must be brought to attention. They occasionally give out some warnings or stage a moderate protest against Saudi Arabia. Despite many pledges, the terror groups were never eradicated. In fact, not only the US makes no moves to stop the terror activities but also it contributes to them. In 2012, the Times newspaper revealed that the the CIA was cooperating with the extremist Muslims to help deliver the Saudi, Qatari and Turkish weapons to the anti-Assad, the Syrian President, forces. A look at ISIS’ financial resources, including selling the ancient artifacts, stealing and oil and weapons smuggling could be interesting. Last year NBC News reported that ISIS terror group had made $7 billion from selling the ancient artifacts. But, this issue is dubious for two reasons. First, the money exchanged in the black market is not clear to be audited, and second, the smugglers’ procedures are never open to exploration because they do not deal commonplace goods.

Another source of funding of the group is the stealing. In 2014, the Financial Times has reported about robbing the Iraqi Mosul’s bank by ISIS, calling it the “biggest bank robbery that ever happened.” The news came out while an Iraqi banking official said that even a bank note was not taken out of the bank. Additionally, even in case of taking place, was the bank robbery really the largest in all times? Still another issue not to be disregarded is ISIS’ spending on its own forces. ISIS pays each of its fighters between $350 and $800 and even more monthly. So, with its 31,500 fighters, the number is according to the CIA’s published figures in 2014, the terror organization needs millions of dollars in income every month.

The question that comes to mind is that if ISIS’ financial resources are not enough, how is the group’s funding is provided?  The answer is easy. A sustainable and rich income is from where the oil is sold through pipelines and not by tankers. A place where the markets are suffering from tremendous corruption, the financial monitoring is weak and the solidarity with ISIS and Al-Qaeda groups is on the rise, namely Kuwait, Saudi Arabia, Qatar and the UAE, which while the oil prices plunged by %50, they are still enjoying huge reserves of wealth. “Evidence of broad regional support is abundant even if news outlets like New York Times have done their best to ignore it”, said Daniel Lazare, the US writer and journalist.

But, why is it so difficult to tell the truth? The answer contains two words: oil and money. The Western countries are largely dependent to the oil of the Persian Gulf’s states, and on the other hand, these states are good markets for the Western weapons. In October 2015, the Pentagon reported that the American military company Lockheed Martin sold four warships to Saudi Arabia worth $11.25 billion. Also, Riyadh, last month, bought smart bombs made by the Boeing and Raytheon companies to counter the Ansarullah movement in Yemen.

Therefore, it can be said that Saudi regime, whether by directly sending financial supports and military equipment or indirectly by founding the schools promoting Wahhabism inside the country or in the poor countries, is the world’s major supporter of such extremist groups. The issue was disclosed through a diplomatic cable by Hilary Clinton, the former US Secretary of State, in 2009, according to the documents published by WikiLeaks website. According to the American journalist and writer Joseph Trento, the world should not fear the Muslims, but it should contain the Saudi princes.