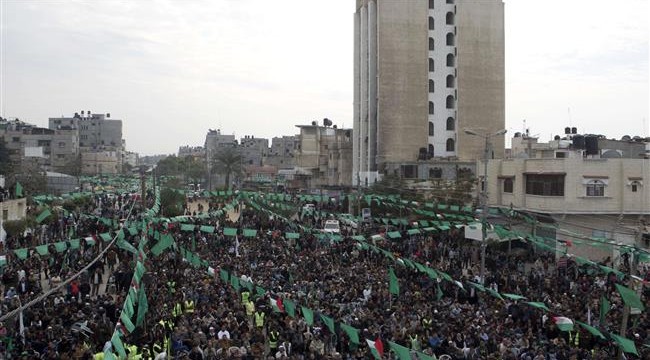 A thousands-strong rally in the Gaza Strip has marked the 28th anniversary of the foundation of the Palestinian resistance movement of Hamas, Press TV reports.

The event was held in Gaza City on Monday, with attendees reaffirming their support for the movement.

Since its establishment in December 1987, Hamas has refused to recognize Israel and adhered to resistance against the Israeli occupation, which it believes is the sole way of bringing about the liberation of occupied Palestinian territories. The movement says its goal is to liberate the entire historical Palestine.

The attendees of the Monday rally held up banners and chanted slogans in support of their fellow Palestinians in the occupied West Bank and their intifada (uprising) against Israeli occupation, which began in early October.

Setting the stage for the uprising was the Israeli regime’s imposition of restrictions in August on the entry of Palestinian worshipers into the compound of al-Aqsa Mosque, the third holiest site in Islam, in East al-Quds (Jerusalem). Palestinians are also angry at increasing violence by Israeli settlers at the compound and their attacks on Palestinian properties, saying the Tel Aviv regime seeks to change the status quo of the compound.

Addressing the rally, Hamas official Mahmoud al-Zahar said, “This intifada is for the sake of al-Quds and it has been manifesting itself in Gaza, in the occupied West Bank, and in al-Quds. They are gathering here for one cause, for one goal, which is Palestine. Our goal is liberating Palestine, all Palestinian territories.”

Israel occupied the Gaza Strip, together with the other Palestinian territories of East al-Quds and the West Bank during the Six-Day War in 1967. The Tel Aviv regime withdrew from Gaza in 2005, but Israeli forces have been carrying out regular deadly forays into the sliver ever since.

Israel has also waged three large-scale aerial and ground wars on the Palestinian enclave in the past seven years. In its latest act of aggression last summer, which lasted for 50 days, the regime killed about 2,200 Palestinians and inflicted heavy damage on Gaza’s infrastructure and economy.

The Gaza Strip has been under a crippling Israeli siege since 2007. The blockade, which has cut off the territory from the outside world, has led to an economic and humanitarian crisis in the densely-populated enclave, described by media as the world’s largest open air prison.