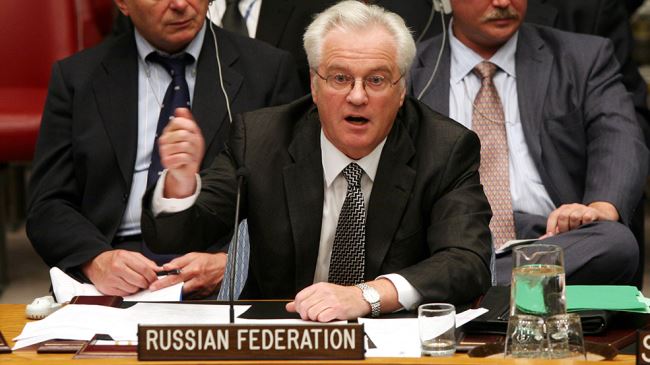 Russia says both the US and Turkey failed to inform the UN Security Council (UNSC) about the illegal smuggling of oil from the territories held by Takfiri Daesh terrorists in Syria and Iraq although they were obliged to do so under international law.

Russia’s Ambassador to the United Nations (UN) Vitaly Churkin made the remark in an interview with Russia’s RIA Novosti news agency, which was published on Monday.

“Under Resolution 2199, which was adopted in February at our initiative, countries must provide information [about financing for terrorists] to the Security Council if they have such information,” Churkin said.

“That means the Americans had to provide such information, and of course Turkey, which should have reported any illegal [oil] trade going on there. They didn’t do it,” he added.

“Together with the Americans, we’re drafting a new resolution tightening regulations on that kind of reporting. Possibly we could oblige the [UN] secretary general to deliver regular reports on the issue, or it would be some sort of counter-terrorist agencies. We hope to adopt this resolution on December 17,” the Russian envoy said.

Russia, which has been carrying out an aerial campaign against Daesh and other terrorist groups within Syria since September 30, has on several occasions accused Turkey of buying illegal oil from Daesh. The terrorist group is smuggling oil from the areas that it has overrun in Iraq and Syria and is selling it to middlemen in the region.

Russian military planes have repeatedly targeted trucks used by Daesh to smuggle oil, including a convoy of some 500 trucks, which they destroyed last month.

Russia has repeatedly said that Washington is aware of the smuggling of illicit oil into Turkey from Daesh-occupied territories in Syria and Iraq, blaming the US for attempts to cover up the illegal trade.

Turkey has rejected oil trade with Daesh, with Turkish President Recep Tayyip Erdogan saying that he will step down if the accusation is proven to be true.

Earlier this month, the Russian Defense Ministry presented evidence of oil being smuggled by Daesh to Turkey. In reaction, the US special envoy and coordinator for international energy affairs, Amos Hochstein, claimed that the quantity of oil trafficked into Turkey from Syria is “of no significance from a volume perspective – both volume of oil and volume of revenue.”

The UNSC adopted Resolution 2199 in a bid to cut funding for Daesh, the al-Qaeda-affiliated al-Nusra Front based in Syria and other al-Qaeda-linked groups. The resolution urges countries not to buy oil or antiquities from the terrorists and refrain from paying them ransoms. It also stipulates that if any individual or state is involved in such activities with the terrorists, they must be charged as accomplices of Daesh.

Daesh terrorists, who have seized swathes of land in Iraq and Syria, have also extended their terror activities to other countries, including Libya. They are engaged in crimes against humanity in the areas under their control.