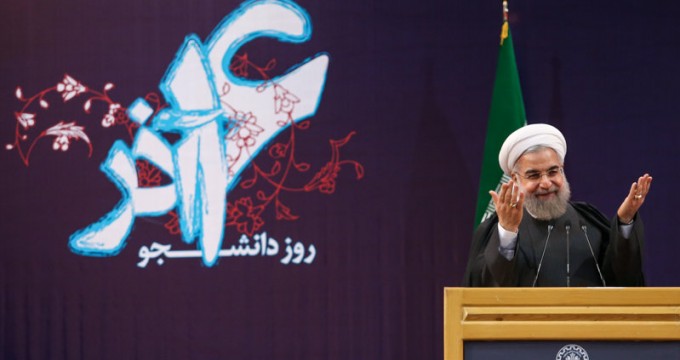 Tehran, December 13, The Iran Project – Ceremonies of National Day of Students across Iranian universities, President Rouhani visit to Mashhad and mourning rituals of Iranian Muslims across the country to mark the passing anniversary of Prophet Muhammad (PBUH) and the martyrdom anniversary of Imam Hassan (AS) and Imam Reza (AS), dominated Iran’s media outlets in the past week (Dec.7-Dec.13).

Iran’s Ambassador to the UN Gholam Ali Khoshrou has submitted to the world body an updated version of a resolution based on President Hassan Rouhani’s proposal for the World Against Violence and Extremism (WAVE).

Zarif: Precise supervisions over JCPOA leave no place for doubts

Mohammad-Javad Zarif who is has appointed a team to supervise present and future claims on Joint Comprehensive Plan of Action based on an order issued by Supreme Leader said precise supervisions by that team leave no place for doubts and worries.
Economy
Air France to resume flights to Tehran after nuclear deal
Air France will resume flights to Tehran for the first time in more than seven years, as part of resuming European trade with Iran following a hard-fought deal to curb its nuclear activities.
Iran best replacement for Turkey in Russian market: TCCIMA chief
The head of Tehran Chamber of Commerce, Industries, Mines and Agriculture (TCCIMA) said with the withdrawal of Turkey from the Russian market, Iranian goods can be the best replacement for the Turkish ones.
Iran denies halving gas exports to Turkey
Gas flow from Iran to Turkey has returned to normal after a temporary fall in pressure at a dispatching station, officials from the two countries say.
Iran becomes India’s 5th top oil supplier
The latest market data show that Iran has replaced Kuwait as the fifth largest oil supplier to India.
Australia taking actions to lift Iran bans
Australia announced on Thursday that it is taking necessary legal actions to lift sanctions imposed on Iran in line with the implementation of the Joint Comprehensive Plan of Action (JCPOA) that was reached between Iran and the P5+1 in July.
Military

Russia expects military contracts with Iran to be worth ‘Billions’

Vladimir Kozhin, a presidential aide responsible for military and technical cooperation said that Russia expects military contracts with Iran to be worth “billions,” as Tehran is “highly interested” in buying Russian military equipment.

Iranian Navy Commander Rear Admiral Habibollah Sayyari voiced the country’s preparedness to expand its collaborations with other countries in a bid to secure peace and stability in international waters.

US State Department Spokesman John Kirby said Iran’s missile tests are not a “violation” of the recent nuclear deal struck between Tehran and six world powers.

Brig. Gen. Ahmad Reza Pourdastan, the commander of Iran’s Army Ground Force, said that Iran has plans to buy Russia-developed T-90 tanks and Iranian military experts would be sent to Russia to sign the contracts with Moscow.

Ministers from Iran and Finland explored avenues for the promotion of mutual cooperation in science and technology.

Millions of Muslims have gathered in Iran’s holy city of Mashhad to mark the passing anniversary of Prophet Muhammad (PBUH) and martyrdom of Imam Hassan (PBUH), the second Shia Imam.

Syria’s Assad blasts Turkey as ‘only lifeline’ of Daesh

Syrian President Bashar al-Assad says Turkey serves as the “only lifeline” for Daesh terrorists, censuring Ankara for its engagement in illegal oil transactions with the Takfiri group.

President Vladimir Putin issues his strongest message yet to Russian troops in Syria, saying any targets threatening his country’s forces must be immediately destroyed.

Iraq’s representative to the United Nations insistently asked the UN Security Council (UNSC) to urge Turkey to leave its soil immediately and unconditionally.

Iran’s First Vice President Es’haq Jahangiri says the recent escalation of tensions between Moscow and Ankara over Turkey’s downing of a Russian jet is worrisome, expressing Tehran’s readiness to help settle the dispute.