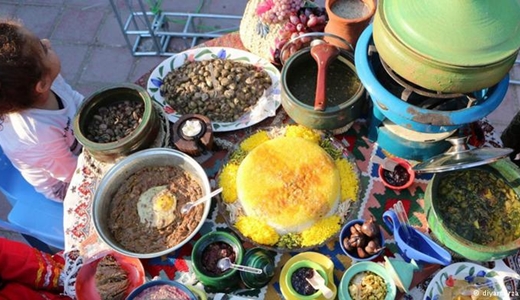 The Iranian city of Rasht gets UNESCO’s recognition as one of the best places in the world as far as cookery is concerned.

Rasht, the capital city of Gilan Province, has made it into UNESCO’s Creative Cities Network for its gastronomy (the practice or art of choosing, cooking, and eating good food).

Rasht is now among 47 cities from 33 countries that are part of the network in seven creative fields — crafts and folk art, design, film, gastronomy, literature, media arts and music.

Khabaronline.ir on December 13 released a report on inclusion of Rasht in the UNESCO list. The following is a brief translation of the report:

The city’s mayor has said that designation of Rasht as a UNESCO Creative City of gastronomy is a major step toward introduction of brand names based in the city.

Mohammad Ali Sabet-Ghadam further said that at a gathering in Paris on Wednesday UNESCO Director-General, Irina Bokova, announced the designation of 47 cities from 33 countries as new members of the UNESCO Creative Cities Network.

Launched in 2004 and now comprising 116 Member Cities, the UNESCO Creative Cities Network aims to foster international cooperation with and between cities committed to investing in creativity as a driver for sustainable urban development, social inclusion and cultural vibrancy.

“The UNESCO Creative Cities Network represents an immense potential to assert the role of culture as enabler of sustainable development. I would like to recognize the many new cities and their countries that are enriching the Network with their diversity” declared the Director-General, as UNESCO celebrates in 2015 the 10th anniversary of the Convention on the Protection and Promotion of the Diversity of Cultural Expressions.

Sheida Mahnam, Ph.D., UNESCO Manager of Social and Humanity Sciences, for her part, said that a number of Iranian cities could make it to the UNESCO Creative Cities Network list, but the fact is that except for the municipalities of Rasht and Isfahan which contacted and consulted UNESCO, the municipalities of other cities did not have active cooperation.

“[…] We invited Ms. Esther Kuisch Laroche, the director of the UNESCO Cluster Office in Tehran and UNESCO’s representative to the Islamic Republic of Iran, to visit Rasht. […] I also met with Melika Medici, a project officer for UNESCO’s Creative Cities Network, a month ago and asked about UNESCO’s decision. She was hopeful. […] On December 11, UNESCO announced the decision of the jury which revealed that two Iranian cities have been recognized as creative,” said Mahnam.

She went on to say that UNESCO’s decision is a golden opportunity for Rasht to turn around its tourism industry, expressing hope that Iran can be an active member of the UN Creative Cities Network and – as a result – absorb more tourists and revenues to the northern city.

This article was translated by IFP from khabar online