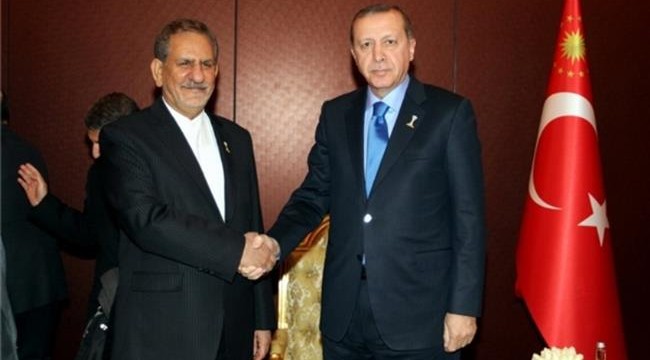 Iran’s First Vice President Es’haq Jahangiri says the recent escalation of tensions between Moscow and Ankara over Turkey’s downing of a Russian jet is worrisome, expressing Tehran’s readiness to help settle the dispute.

“We are concerned about the tension created in relations between Turkey and Russia and do not regard this tension as beneficial to the region at all and are ready to help ease the tension,” Jahangiri said in a meeting with Turkish President Recep Tayyip Erdogan on the sidelines of a meeting in Turkmenistan’s capital of Ashgabat on Saturday.

Moscow and Ankara have been locked in a war of words since November 24, when Turkey downed the Russian Su-24 fighter jet over Syria, claiming that it had entered Turkish airspace, an accusation strongly rejected by Moscow.

Of the two pilots aboard the warplane, one was rescued with the help of the Syrian army, but the other was wounded by militant fire while he was parachuting down and was killed on the ground.

Jahangiri further said Iran’s foreign policy stipulates the expansion of relations with all countries, particularly the neighboring states, on the bases of good neighborliness and mutual trust.

He stressed the importance of holding more consultation between Iranian and Turkish officials to find peaceful solutions to the ongoing crises in the region.

“Despite the difference of opinion [between Tehran and Ankara] about the Syrian issue, we should cooperate with each other in the fight against extremism and terrorism,” Jahangiri added.

He emphasized that interaction, respect for the country’s national sovereignty and territorial integrity and efforts to solve differences can lead to the establishment of sustainable peace and stability in the region.

The Turkish president said his country does not welcome the escalation of tensions in the region and calls for dialog to clear misunderstandings.

Erdogan added that Tehran-Ankara relations should not be affected by foreign influences and said the two sides should foil attempts to cause religious discord as soon as possible.

He called on the two countries to make use of their capacities to strengthen cooperation in various fields.

In response to Erdogan’s remarks, Jahangiri said the Iranian administration does not impose any restrictions on media, adding that even the administration is itself criticized in the media.

He added that Iranian officials have never made any comment against the Turkish government.

“However, your authorities have expressed many negative and incorrect statements against the Islamic Republic of Iran, the government and sanctities of the Iranian people,” the Iranian vice president added.